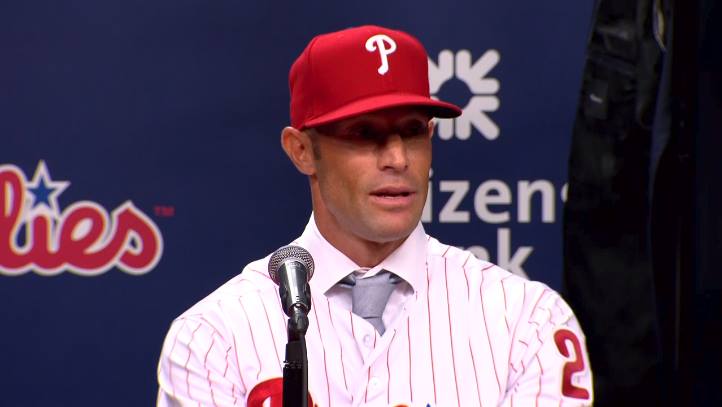 General manager Matt Klentak cited Gabe Kapler's preparation as one of the reasons he's the new Philadelphia Phillies manager. We won't know until late March of 2018 what that looks like in an actual game, but we got a pretty good idea at his introductory press conference Thursday.

Kapler, who will wear No. 22, began the press conference by invoking the names of past Phillies greats Mike Schmidt and Larry Bowa. Continuing the theme of discussing the team's history, he spoke highly of Jimmy Rollins, Ryan Howard and Chase Utley, all of whom were playing during his 12-year career. Having spent nearly three years as the Los Angeles Dodgers director of player development, Kapler says that he was blown away by Utley's preparation, and wants to model the Phillies after him.

Kapler's praise of Utley drew similar positive reactions to when former Eagles coach Chip Kelly told reporters in 2013 that he told the locker room "we're from Philadelphia, and we fight."

He also made reference to reference to a Philadelphia Magazine interview with Phillies chairman John Middleton, in which Middleton recalled telling Howard after the team lost the 2009 World Series that he wanted his ******* trophy back.

"We're going to think traditionally and progressively. We're going to mold those two things together," Kapler said. "All of this is an effort to bring that effing trophy back to John Middleton."

To Phillies fans, the reference to Middleton was easy to understand. For someone with no prior connections to the Phillies organization, it was pretty impressive that he was even aware of the interview.

Kapler even seemed comfortable answering questions about old posts on his lifestyle blog that have resurfaced in recent days. He also talked about a need for diversity on his coaching staff and what he's excited about with the team's current roster. Heck, the one current player that he referenced in the entire press conference was reliever Luis Garcia, who is coming off of a career-year in 2017.