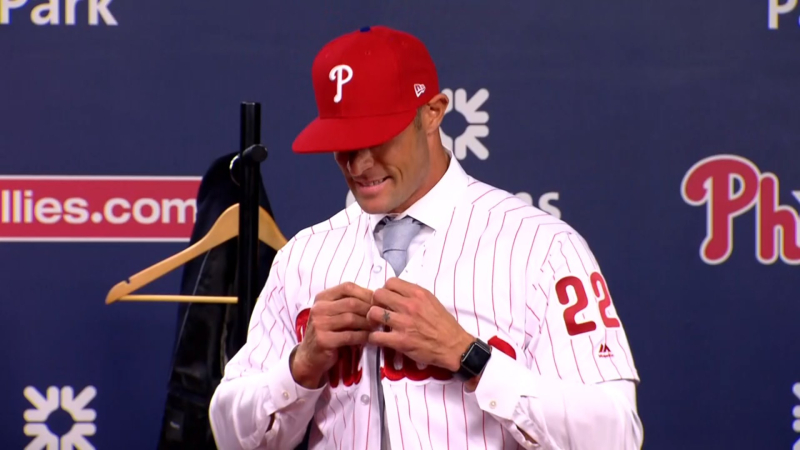 The Philadelphia Phillies introduced new manager Gabe Kapler to the media Thursday afternoon, with Kapler drawing nearly unanimous praise for the first impression that he made in Philadelphia.

However, the feeling from a fair amount of people that worked with him in Los Angeles isn't as positive.

Let's start with this: the public narrative that Dodgers president Andrew Friedman and general manager Farhan Zaidi were fans of Kapler is largely correct. (One person close to the situation described Friedman and Kapler as "bringing out the worst in each other," while still noting that the executive was pro-Kapler.) However, many others in the organization didn't have as positive of an opinion about the 42-year-old.

In fact, after the Dodgers parted ways with Don Mattingly following the 2015 season, it's believed that Friedman viewed Kapler as potentially the No. 1 candidate to replace him. However, key players on the team made clear the Dodgers' brass that they weren't keen on the idea of him becoming the manager. Jon Heyman of FanRag Sports reported that Clayton Kershaw and Adrian Gonzalez were among those players, something I've also heard.

That, as Heyman also noted, wasn't the only reason that the Dodgers instead chose to hire Dave Roberts. As the past two seasons have shown, Dave Roberts is a pretty good manager that's put together a staff that works well with the Dodgers.

There was even some thought after Kapler didn't get the managerial job that he would be the first base coach on Roberts' staff. Again, there was pushback from players and coaches, one of the reasons that Kapler ultimately didn't end up on the coaching staff.

Keep in mind, at this time Kapler had been in his role as the Dodgers' director of player development for less than a year. However, he also had a stint with the team as a player in Spring Training of 2011, when some key players, like Kershaw, were still on the team.

Opinions on him were certainly not all negative.

After the Phillies announced the hiring of Kapler, Roberts, in the midst of a heavily contested World Series, praised Kapler:

“With the culture he’s instilled, the teaching, he’s definitely impacted the guys that are with us right now,” Dodgers manager Dave Roberts said of Kapler. “Gabe and his staff have been a huge part of what we have this year.”

It's unclear what Roberts' private opinion of Kapler's work is, but that is a pretty good endorsement. That goes along with the team's two top decision makers, Friedman and Zaidi.

Regardless of what opinions people had of Kapler in Los Angeles, he has the Phillies job and a chance to manage a team with a ton of young talent. Whatever missteps he may have had in his previous role, he has a chance to learn from in Philadelphia.

One thing has been made abundantly clear: this was Klentak's hiring. President Andy MacPhail and partner John Middleton were not present during the first round of interviews. Middleton was at the press conference, but not on stage with Klentak and Kapler. That's not to say that they weren't on-board with the hire, but if things don't work out, it will reflect most poorly on the team's general manager.