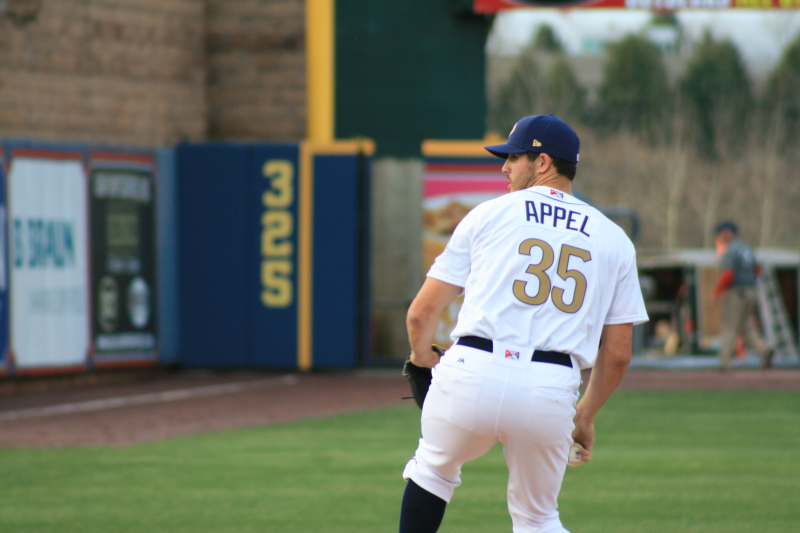 The Phillies then opened up spots on the roster by outrighting pitcher Elniery Garcia and designating for assignment pitchers Mark Appel and Alberto Tirado.   With 40-man roster at 38 before the day's moves, that made room for Vielma and pitchers Seranthony Domínguez, Franklyn Kilomé, José Taveras and Ranger Suárez.   The moves leaves some Phillies prospects susceptible to the Rule 5 draft.

Among them are outfielders Carlos Tocci and Andrew Pullin, shortstop Jose Gomez (acquired from the Colorado Rockies in the trade for Pat Neshek) and pitcher Brandon Liebrandt.  A team can claim any of the above players with the stipulation that they remain on the acquiring team's roster for the entire season.  Last season pitcher Hoby Milnerwas claimed by the Cleveland Indians, but returned to the Phillies at the end of Spring Training.

Appel potentially could clear waivers and be assigned to Triple-A.  After being selected first overall in the MLB draft in 2013, one pick ahead of Chicago Cubs third baseman Kris Bryant..  Appel has struggled with injuries and while he was one of the bigger names sent to Philadelphia in the Ken Giles trade, he was always a bit of a wild card.

Vielma is what the Phillies seem to have a good supply of: switch-hitting middle infielders.  Vielma does not really project to do much with his bat.  I would not be shocked if Vielma ended up designated for assignment later this winter to free space for future acquisitions.

Names still on the roster that could change later: outfielder Cameron Perkins, reliever Zac Curtis and first baseman Tommy Joseph.  With the Phillies reportedly pursuing Carlos Santana for first base and Rhys Hoskins in the mix (possibly as a left fielder, it appears).  Any acquisitions that land on the roster would require a spot, as the roster now stands full at 40.

Each of the four pitchers added to the roster today remain promising Phillies prospects.  Looking at the Phillies MLB Pipeline Top 30, Kilome is ranked seventh, Suarez 14th, and Dominquez 28th. Tavares is currently unranked but remains a promising starter.

Tirado might be claimed.  What attracted Phillies to trade for Tirado was his high-velocity fastball. Controlling it has been another matter; another team may wish to take that chance.  Tirado came to the Phillies along with Jimmy Cordero in exchange for outfielder Ben Revere.

The roster construction is just beginning.  The Rule 5 draft takes place on December 14 at the winter meetings.  Any players unclaimed remain Phillies property for another season.  However, the Phillies could make more moves between now and then.  Stay tuned.