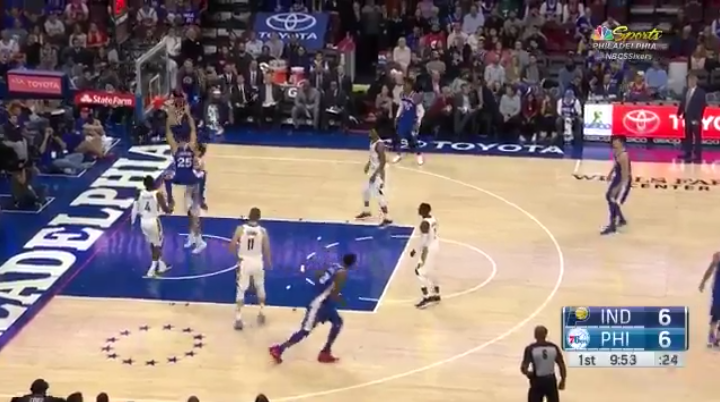 J.J. Redick exploded for 20 points in the second half to push the Sixers (5-4) past the Indiana Pacers (5-4) by a score of 121-110 on Friday night. The win extends the Sixers win streak to four games and end the Pacers recent three game win streak. It is the Sixers first four-game win streak since December 12, 2013 to January 4, 2014.

The game started with great back and forth action, and it would stay that way throughout the first half.

Former Sixer Thaddeus Young got on the board first to give the Pacers and early lead before the Sixers pulled ahead early in the first quarter.

The Pacers would push back but the Sixers ultimately held on to a 30-28 lead after one quarter. Robert Covington and Dario Saric led the Sixers with seven points apiece and Ben Simmons had two points, five rebounds, and five assists in the opening quarter, taking on more of a role in the post than he has so far this season.

Bojan Bogdanovic of the Pacers led all players with nine points after one quarter.

The Pacers answered the Sixers early push by going on a 15-2 run between the first and second quarters to pull ahead 35-30 early in the second quarter.

The two teams would trade leads possession after possession as they matched each other on every possession. The Sixers began to struggle to close the half, and the Pacers went on a 11-1 run during the final moments of the half.

Joel Embiid picked up his third foul of the game with less than two minutes left in the half. He finished with seven points, and five rebounds in 14 minutes.

Robert Covington was one of three Sixers in double figures at the half with 13 points. J.J. Redick had 11 points and Dario Saric had 10 at the break.

The Pacers also had three players in double figures at halftime, led by Bojan Bogdanovic's 12 points. Thaddeus Young and Domantas Sabonis both had 10 points.

The returning Myles Turner was a menace off of the bench with nine points and six rebounds in 10 minutes for the Pacers in the first half.

Ben Simmons finished with seven assists in the first half.

Joel Embiid came out in the second half and picked up four points and two rebounds quickly before committing his fourth personal foul, forcing him to sit once again.

Richaun Holmes received his first minutes of the season after Embiid earned his fourth foul as he returned from a wrist fracture and quickly returned to form with a huge jam.

The Sixers would build off of Embiid's strong start to the second half, opening up a nine point lead and outscoring Indiana 25-11 in the opening stretch of the third quarter.

Victor Oladipo would lead the charge for the Pacers and help Indiana trim the Sixers lead to one point. The third quarter ended with Jerryd Bayless rising up with the clock running down and hitting a timely jumper from the elbow with o.6 seconds in the quarter.

The Sixers took a 92-89 lead into the fourth quarter.

The Sixers good shooting continued, with Dario Saric, Joel Embiid, and Ben Simmons all hitting jumpers early in the third to extend the Sixers lead.

Unfortunately for the Sixers Bojan Bogdanovic continued to shoot well for Indiana, and kept the Pacers within striking distance during the Sixers early push.

With 4:39 left in the game and the Sixers up 105-103 the referees made a questionable call when a ball appeared to go out of bounds after hitting Pacers center Domantas Sabonis. The Refs awarded possession to the Pacers and then Oladipo hit a three to give the Pacers their first lead of the fourth quarter.

The Sixers took the game back in a big way.

It started with a missed alley oop by Joel Embiid. The loose ball was recovered by a diving Jerryd Bayless and passes to Ben Simmons. Simmons whipped it to Covington who drilled a three to give the Sixers a 110-108 lead.

Sabonis would tie the game on the ensuing possession. Simmons would record his tenth assist when he found J.J. Redick for a three pointer to give the Sixers a three point lead. The assist gave Simmons his second triple double in his ninth career game.

It would be Redick who would put the nail in the coffin. On the Sixers next possession Redick dribbled to the right with shot clock winding down, rose up with Myles Turner contesting the shot and his momentum pulling him out of bounds. Redick drilled the three to give the Sixers a 116-110 lead and send the Wells Fargo Center into a frenzy with a minute left in the game.

You have to see it to believe it:

JJ Redick – What a shot!pic.twitter.com/eaAvn2Fqcq

Redick would hit his third consecutive three on the next possession to make it a nine point game.

Embiid would tack on two free throws to seal the victory.

20 of J.J. Redick's team-high 31 points came in the second half. Redick hit eight threes in the game. Robert Covington tacked on 22 points and Ben Simmons had 14 points, 11 rebounds, and 11 assists. Dario Saric (14) and Joel Embiid (18) were also in double figures for the Sixers.

"I got goosebumps right now," said Redick after the wild finish. "I'm so proud of our team." It is safe to say that Redick gve every fan in attendance goosebumps with his clutch performance.

The Sixers will have a great performance to build off of as they embark on a five-game west coast road trip.