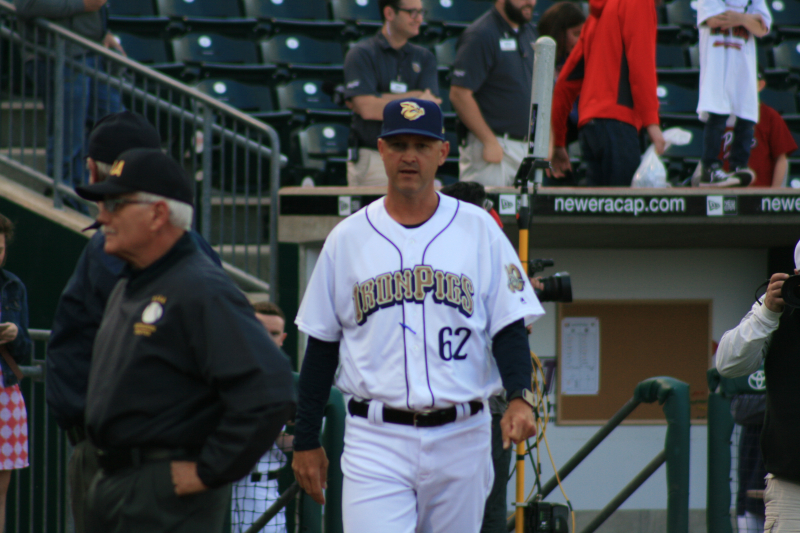 With new manager Gabe Kapler on board, the Phillies may finally start to finalize their major league coaching staffs.  The New York Mets, Washington Nationals, and San Francisco Giants all announced some coaching moves on Thursday, as the remaining available coaches settle into new positions.   The Phillies reportedly are set to add at least two to their staff.

According to Todd Zolecki of MLB.com, the Phillies will add Dusty Wathan, last manager of Triple-A Lehigh Valley to the staff, along with Rick Kranitz, most recently Phillies assistant pitching coach.

Wathan was possibly the runner-up for the Phillies managerial job.  Having managed many of the current young Phillies players at Double-A Reading and Triple-A Lehigh Valley, he will be a familiar presence for many players who are said to have great respect for Wathan.  Wathan could coach third base; the Phillies may go with a more veteran bench coach with the new manager Kapler.

Earlier, I suggested that Bill Haselman might be the choice for bench coach.  Haselman and Kapler are reportedly "tight".  Haselman is currently manager of the Dodgers' Triple-A affiliate.  Haselman has a lot of coaching experience. I would think if not Haselman, someone with simliar experience would serve as bench coach.

One name that has been under the radar thus far is Kranitz.  I suggested a couple weeks ago that the Phillies could turn to Kranitz to be the pitching coach.  Kranitz joined the Phillies coaching staff under president Andy MacPhail and just a few days before Matt Klentak was named general manager.  Kranitz was pitching coach of the Balitmore Orioles under MacPhail and Klentak.