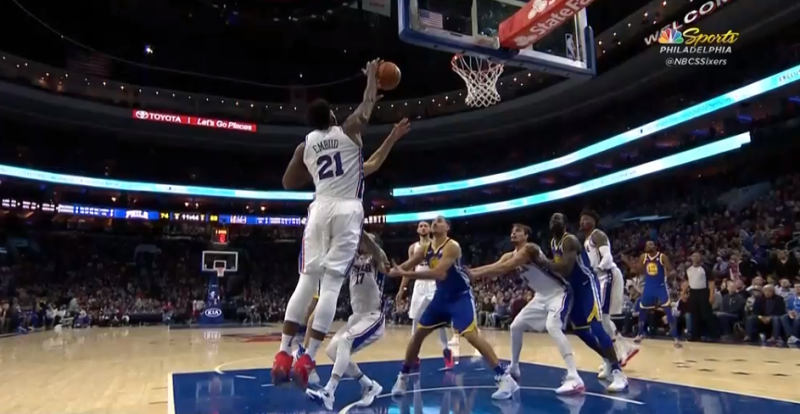 Let's be real. We all expected it. At least I did.

Philadelphia led by as many as 24 in the first half, but the third quarter was about as bad as you can imagine. One week removed from being outscored 36-21 in the third at Oracle, they score just 15 points and allow 47 in the third in front of the home crowd. The Sixers bench didn't help much at all, combining for just points in 58 combined minutes between Timothe Luwawu-Cabarrot, T.J. McConnell and Richaun Holmes.

The Sixers were shooting over 60 percent from the floor at halftime, but finished shooting 49 percent. They hit 50 percent of their three's in the first half, but finished with a 34.9 percent line from beyond the arc. Golden State led the battle on the boards by 10 (49-39). Philadelphia's starting five played 33+ minutes each and didn't get much time to rest with a depleted bench that is now without Justin Anderson. Ben Simmons finished with 23 points, 12 assists and eight rebounds while Joel Embiid followed up a 46-point game against the Lakers with a 21-point, eight rebound effort. Joel took a fall in the second half, but seemed okay, so it'll be interesting to see if he sits during their next game against Utah. J.J. Redick and Robert Covington each had 20.

Meanwhile, Steph Curry scored 20 of his 35 points in the second half, adding five rebounds and five assists to his final line. Kevin Durant contributed with 27 points, five rebounds, three assists and two steals.

The Sixers didn't waste any time jumping on the Warriors, coming out of the gates firing. They shot 73.1 percent from the floor and 66.7 percent from beyond the arc. Robert Covington led the charge in the first quarter, hitting all five of his triples as Philadelphia put up 47 points, leading the defending champs by 19, 47-28, after 12 minutes. After struggling over the L.A. trip, J.J. Redick had a strong first quarter with eight points on 3-for-4 shooting. Embiid had eight as well while Ben Simmons and Dario Saric finished the first with seven a piece.

Philadelphia kept the momentum going in the second quarter, holding off a couple of small Warriors run to maintain a commanding lead. Joel Embiid sat for a large part of the quarter to start, allowing Simmons to play off ball for a while, and my goodness Ben had some phenomenal plays that displayed his crazy athleticism, including this one…

Ben Simmons is a magician.

Simmons erupted in the second quarter, scoring 11 points and dishing out three assists to bring his total to 18 and nine to go along with three rebounds on the night. In the first half, Ben shot 8-for-9 from the floor. Golden State wouldn't get any closer than 14 in the second quarter as the Sixers carried momentum from the first to take a 72-54 lead into halftime. Through two quarters, they were shooting 60.8 percent from the floor and 50 percent from beyond the arc. The entire starting lineup played well for the most part as Embiid finished the first 24 minutes with 17 points, five boards and two assists. Two of his points came on a fast break jam courtesy of Dario.

The no-look heave from Dario to JoJo for the jam! pic.twitter.com/UUD1n7Kbdb

Covington had 15 on 5-for-7 shooting from beyond the arc and J.J. Redick hit five of his seven shots for 13 first half points. Philadelphia outscored the Warriors 38-24 in the paint.

Meanwhile, Golden State struggled from three-point range in the first two quarters, going 1-for-9. Stephen Curry and Kevin Durant were the only two Warriors in double figures at halftime with 15 and 14, respectively. They turned the ball over eight times compared to the Sixers' four and gave up the most first half points this season.

The Warriors, NBA's best third quarter team, hit the ground running out of the half, putting together an 11-2 run to start the quarter, cutting the Sixers lead to 13 early on. Golden State slimmed the lead down to nine, but Covington responded with a triple to put the Sixers back up by 12 with 6:29 to go in the third. With under four minutes to go in the third, though, the Warriors cut the lead to two, 87-85. Golden State took the lead, 90-89, after two free throws from Curry, their first lead since they led 7-6 early in the first. The Warriors equaled the Sixers first quarter total in the third, using a 47-point quarter to lead 99-89 after three.

Golden State outscored Philadelphia 47-15 in the third and they wouldn't look back in the fourth, closing it out with a 124-116 win. Not worth typing the events that happened in the final quarter, because there wasn't anything that brought the Sixers close down the stretch in this one.

The Sixers have off on Sunday before playing host to the Utah Jazz on Monday.