Eagles Flyers Phillies Sixers About Us Write For Us
Flyers' skid continues with 4-3 overtime loss to Islanders
Flyers-Islanders: Postgame Review 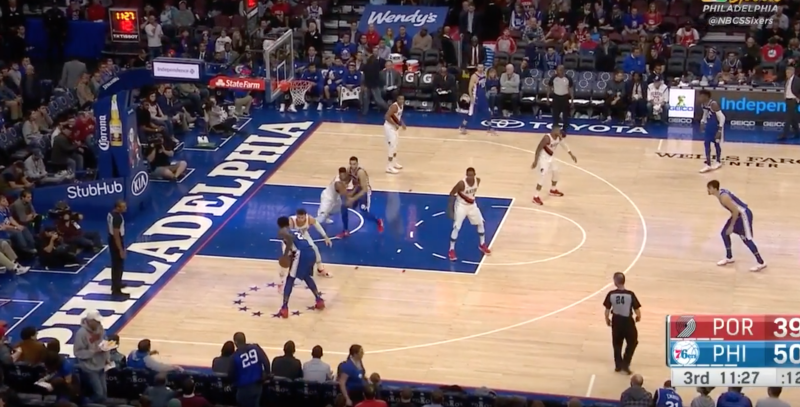 The Sixers (10-7) were in search of their second win in a row and second straight against a western conference opponent as the Portland Trail Blazers (10-8) visited the Wells Fargo Center on Wednesday night.

Luckily, the home crowd was treated to an early Thanksgiving meal as the Sixers knocked off the Blazers 101-81 in fine fashion.

The game started off on a high note with the Sixers starting the contest on a 16-0 run. It took Portland almost seven minutes to get their first basket of the game. Shabazz Napier stopped the bleeding with five straight points to lead his team into a timeout, trailing 19-5 late into the first quarter.

The Sixers outscored the Blazers 26-14 at the end of the first break.

The Blazers played back and forth to Philly throughout, but the Sixers were able to keep their lead in the second half and beyond to cruise on to victory.

Despite shooting struggles early on, the Blazers had a security blanket in their star point guard Damian Lillard. The team may have just shot 33.7-percent (30-89) from the field, but Lillard led the team with 30 points and shot 6-of-13 from downtown.

The Blazers relied heavily on Lillard scoring the ball, but he struggled to do much of anything else. He added just three rebounds, two assists, a steal, and a block to his totals. Despite 30 points, which is a feat itself, the Blazers were still unable to overcome the Sixers at any point during the game.

Jusuf Nurkic had 14 points and 11 boards as the starting center, but was also a minus-18 while he was on the court.

Napier, who got the Blazers' first basket of the game, was his team's best bench option, scoring 13 points, with three rebounds, four assists, and two steals in 27 minutes.

For the Sixers, is there really any surprise who the leader of the team was throughout this game?

Joel Embiid was excellent tonight, creating plays, drawing separation, and getting to the basket. Embiid led the Sixers with 28 points, had a game-high 12 boards, and added two blocks in 30 minutes of playing time.

The only pitfall for Embiid was his five fouls that played a big reason for the lower amount of minutes as usual.

Still, Head Coach Brett Brown used Embiid as much as possible and his impact was felt.

In terms of his progress in recovery of his partially torn meniscus at this point of the season, Brown said that Embiid has "exceeded his expectations" thus far.

Ben Simmons yet again put in quality minutes for the Sixers with 16 points, eight rebounds, and nine assists. Yes, he was just a little bit short of his third career triple-double, but like Monday's career night, Simmons proved yet again why he's considered to be the early frontrunner for NBA Rookie of the Year.

Dario Saric continues to get better and better as the season develops. He hasn't had those games of extreme promise like he had last season with the Sixers, but he's still been impactful in all of the little areas.

Saric shot the ball pretty well from three, going 3-of-7, and the Sixers are a much better team when the team finds ways to distribute the ball and get Saric open looks from downtown.

The Homie finished the night playing 27 minutes with 11 points, seven rebounds, two assists, a steal, and a block.

JJ Redick also had 11 points for Philly, and was a plus-22 when out on the floor. Nine of Redick's 11 points were from three and he also had five rebounds and a steal.

Despite his team's success and an all-around victory for the Sixers, Brett Brown gave the offense a grade of "C+" for the performance.

"Turnovers, you know at times, ratty shots, I thought we could've put them down a little bit earlier, the mere fact that I'm greedy, and you want more," Brown said. "I thought that our defense was excellent, but when you look at some of the turnovers and finding the balance, you know, Jo(el Embiid) hasn't had a touch in about six trips, you feel that."

"Some quick early threes, you know not all threes are good threes," he said. "There's judgment on that, sloppy portions of the game where we just didn't get a shot. You know it's part of the evolution. If you said you could have bad offense vs. bad defense, I would take the bad offense and have a good defense any day of the week."

To put that "Good Defense vs. Bad Offense" example to good use, Robert Covington didn't have his best offensive night by any stretch of the imagination.

He finished with nine points on 3-of-11 shooting, 2-of-8 from beyond the arc. But he also had 10 rebounds, all of which were from the defensive side of the ball.

All-in-all, Sixers played very well against a team that gave them runs for their money last season.

There were no buzzer beaters or close calls that were considered to be nail-biters. The Sixers played like they were the better team, and by all accounts, the better team won.

For Brett Brown to grade a team a 'C+' that shot 43.3-percent from the field just shows that his expectations for this team are so much greater than the product they are putting out on the court right now.

The Sixers look to keep their winning streak alive against the Orlando Magic at home on Saturday at 7 p.m.