With Fans Getting Restless, Flyers Players Back Hakstol 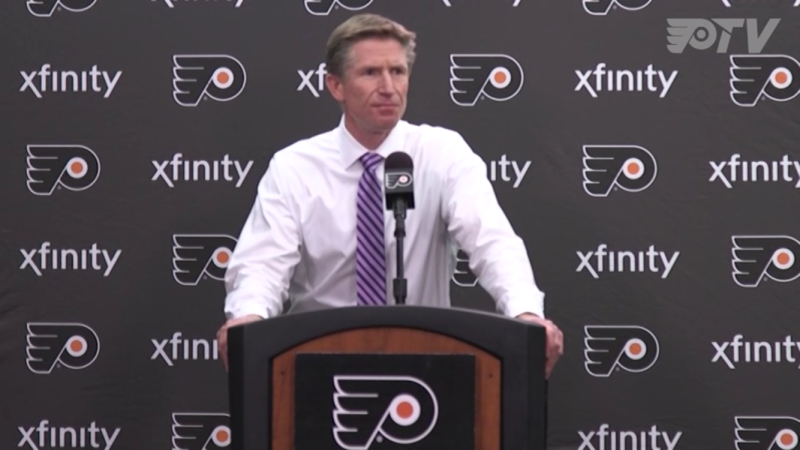 There were points during the Flyers ninth straight loss where more than just heavy boos were audible. There were chants. Clear ones.

"Fire Hakstol," fans chanted as the Flyers fell to the Sharks, 3-1, in a rather lifeless and uninspired game.

The play on the ice showed a team that has essentially given up on everything and tuned out the coach. They said otherwise following the game and a closed-door meeting called by captain Claude Giroux, backing and supporting Dave Hakstol.

"They can chant whatever they want," Giroux said. "We’re in this together, we’re all in the same boat here. It’s not on him, it’s on everybody."

"I don't think that's a fair assessment," Wayne Simmonds said. "He's not on the ice, he's not playing. It's up to us."

To be fair, Hakstol did accept criticism and took it head on when he was asked about the way things have gone lately.

"Nobody said this was going to be easy. If you don’t want to be in this spot, that’s a choice. That’s how I react to it," Hakstol said. "There’s high expectations in this market and we have maybe the best fans in the National Hockey League and they’re full of value for having expectations. As I said, nobody said you go through hard times, nobody said that’s going to be easy. You better be able to stand up and handle that."

When GM Ron Hextall spoke, he too looked at the players and their ability to stick together as a positive. When asked about coaching, Hextall noted that everyone is different in how they react.

"When you go all of the sudden start five, six, seven, eight games in a row without a win, you start to get frustrated. I think the frustration started showing there in the third period for us, but for the most part we’ve done a pretty good job of trying to move on from one game on to the next," Hextall said. "It’s not easy, you’ve been in a locker room when you’ve lost seven, eight, nine games in a row, and it’s ugly, right? But this group I give them credit they’ve stuck together, they’ve battled through it, if we weren’t battling right now we’d have a problem."

But that doesn't mean anyone is truly safe in all of this. Hextall noted that his job is to make this team the best it can be, and all options are open.

"I try to make this team better every day," Hextall said. "There’s something that can be done. That doesn’t change throughout the year."

So for now, the onus is on the players. They stood up for their coach as the fans essentially called out their lacking effort. Saturday's game is the first chance to show how all-in they all are. The GM called it a must-win. The coach has said the focus moves to the next game. Let's see if that translates to the guys actually on the ice, that feel responsible for all of this talk.