Eagles Flyers Phillies Sixers About Us Write For Us
Phillies reportedly checked in on Zack Greinke; talks 'ended quickly'
Report: Phillies among teams who have made offer for Manny Machado

Due to high price, Angels move on from Hernandez, acquire Kinsler 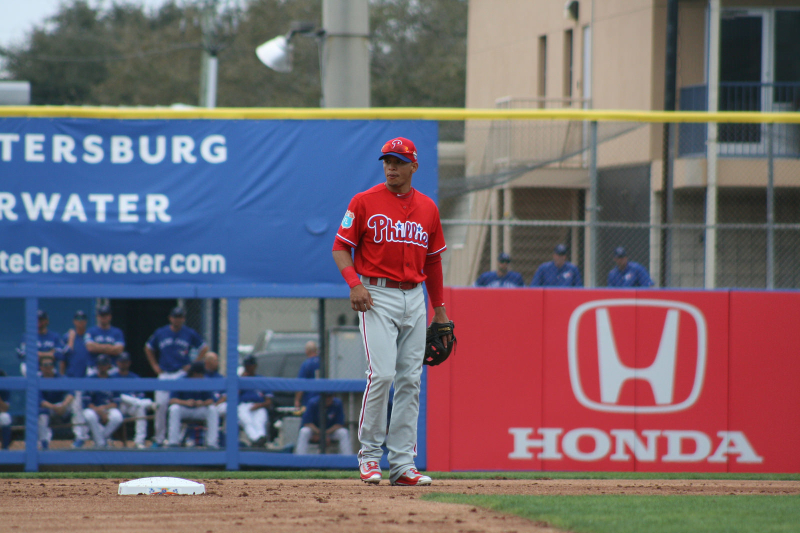 Will Cesar Hernandez remain with the Phillies for the 2017 season? (Frank Klose/SportsTalkPhilly)

The Los Angeles Angels, who have been connected to Cesar Hernandez for over a year now and seemed to be his No. 1 suitor, have moved on. According to Ken Rosenthal of The Athletic, the team will acquire veteran second baseman Ian Kinsler from the Detroit Tigers instead.

This comes just two days after Jim Salisbury of NBC Sports Philadelphia reported that the Angels "coveted" Hernandez, who they viewed as a leadoff hitter in what's becoming a potentially dangerous lineup.

As it turns out, Salisbury says that the Angels were very interested in the 27-year-old second baseman, just not enough to meet the asking price of the Phillies:

Angels really liked Cesar Hernandez, but found the Phillies' price to be too high, source says

The New York Mets have also been connected to Hernandez, so perhaps the Phillies will pivot to discussing Hernandez with the Mets or another unidentified team.

It does seem possible that no team will meet the asking price that the Phillies have for Hernandez, who has led the Phillies in walks three straight years. Given that he's a strong leadoff hitter, grades out well in the field and is under team control through 2020, the Phillies don't seem to feel as though they have to move him. This comes despite the fact that Scott Kingery, one of the organization's top prospects, is likely to make his major league debut in 2018.

New Phillies manager Gabe Kapler didn't sound worried when talking about the idea of potentially having a surplus of starting-caliber infielders in 2018.

"I see that as a huge advantage," Kapler told MLB.com's Todd Zolecki Tuesday. "Let's say we have Cesar and J.P. and Freddy and Franco, I think it's an advantage to those guys because we're going to have a unique opportunity to put them in positions to succeed by matching them up effectively."

General manager Matt Klentak has said much of the same when asked about the team's infield. Of course, what else are the Phillies going to say publicly? It will be interesting to see if this pushes the Phillies to move Freddy Galvis, who has been connected to the San Diego Padres by multiple outlets.

It also doesn't seem impossible that the Angels again show interest in Hernandez next offseason, as they now have for consecutive offseasons. Kinsler has been one of the best second basemen of this era, but he saw a pretty rapid decline at the plate in 2017. If he fails to have a bounce-back season, the Angels may elect to let him walk after 2018, when he can be a free-agent. Perhaps the third time will be the charm, and the Phillies will be able to work out a trade with the Angels next offseason.