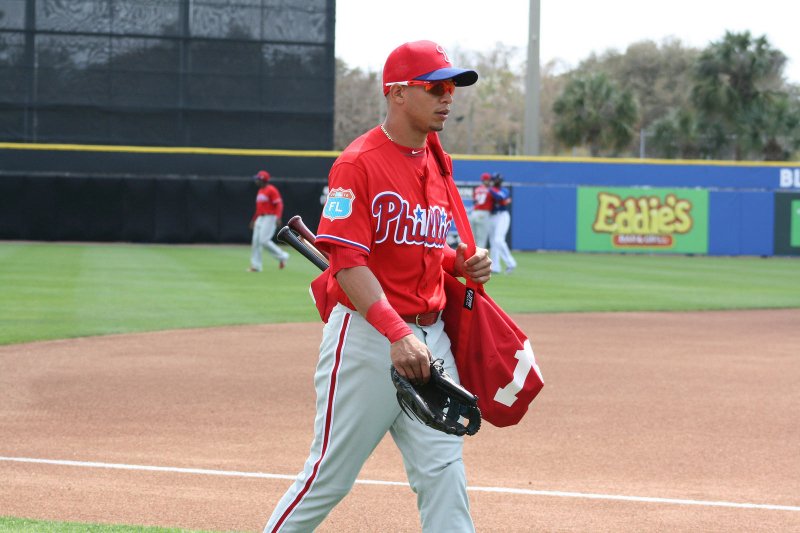 Will Cesar Hernandez be with the Phillies in 2018? (Frank Klose/SportsTalkPhilly)

Top prospect Scott Kingery is looming at Triple-A, but the Philadelphia Phillies don't seem to feel pressured to move incumbent second baseman Cesar Hernandez unless they are blown away.

According to Jon Heyman of FanRag Sports, general manager Matt Klentak will listen on Hernandez, but has a high asking price on the productive second baseman:

Jim Salisbury of NBC Sports Philadelphia reported last week that the Phillies have received trade offers for both Hernandez and his double-play partner, Freddy Galvis. Ken Rosenthal of The Athletic noted that the Los Angeles Angels, who have been connected to Hernandez for nearly a year, are one team interested in his services. Heyman reported last week that the division rival New York Mets are among those interested in Hernandez. Both teams appear to be casting wide nets in their search for a second baseman, so a high asking price could push them in another direction.

The high asking-price for Hernandez isn't new. Salisbury noted last offseason that the Phillies had a "very steep asking price" when discussing Hernandez with other teams.

The 27-year-old led the Phillies in walks for the third consecutive season in 2017, while also grading out well as a fielder. This came after a breakout 2016 season where he slashed .294/.371/.393, while posting a 4.3 fWAR. In addition to being a pretty consistent hitter and a strong fielder, Hernandez has elite speed. His upside as a basestealer still seems to be untapped. Now that the Phillies have a new coaching staff, that may intrigue them. It may also intrigue potential suitors.

On top of his play making him an attractive piece to trade for, Hernandez can't become a free-agent until after 2020. He may take more to acquire in a trade than some veterans, but he also would likely be cheaper financially for the foreseeable future.

The Phillies are likely to open the season with Kingery at Triple-A, so they avoid him accumulating an extra year of service time. At least for the beginning of the season, Hernandez could remain at second. Once Kingery is called up, however, Hernandez would likely become an overqualified super-utility player.

Even with a need for pitching and an excess of middle infielding talent, the Phillies seem likely to call the bluff of potential suitors for Hernandez. If a team meets their asking price - which would likely be a package heavy on pitching - then they would be willing to part with Hernandez, with the understanding that Kingery isn't far away. If the asking price isn't met, the Phillies simply don't seem to feel that they have to move Hernandez, regardless of the amount of infielding talent in their organization.