Eagles Flyers Phillies Sixers About Us Write For Us
Phillies Rumors: Club showing interest in Carlos Gonzalez
With Yelich potentially in play, does that route make sense for Phillies? 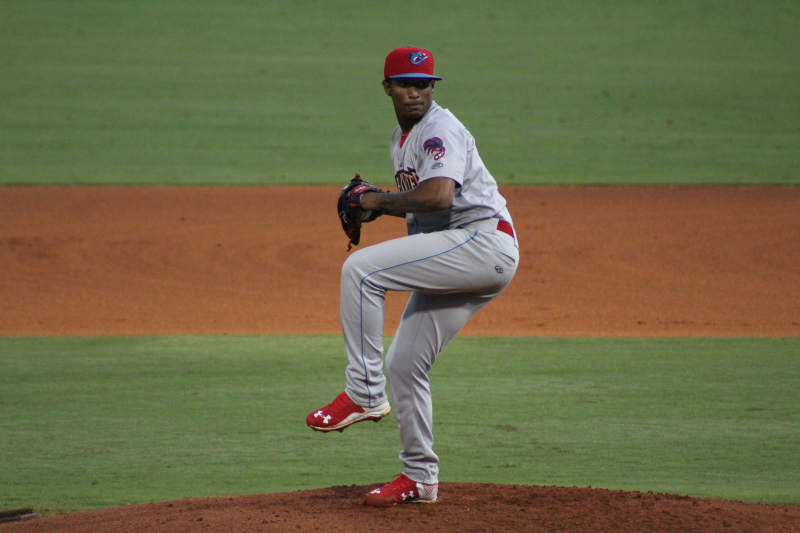 Sixto Sanchez is viewed as one of the best prospects in the sport. (Brandon Apter/SportsTalkPhilly)

This past July, Jarrett Seidler of Baseball Prospectus referred to Philadelphia Phillies prospect Sixto Sanchez as "the world's most interesting pitching prospect" in his midseason prospect rankings. It appears that the high opinion that he has of Sanchez is shared around the sport, with some maybe even higher on the 19-year-old right-hander.

Earlier this week, Roch Kubatko of MASN, in a piece discussing the Phillies interest in Baltimore Orioles superstar Manny Machado, noted that the Orioles "covet" Sanchez. However, he also pointed out that Sanchez is viewed so highly that he might be off-the-table, even in a potential deal for one of the five most talented players in the league.

Kubatko joined Joe Giglio on SportsRadio 94 WIP Tuesday evening, and took things a step further, saying he spoke to a scout that compared Sanchez to Hall of Famer Pedro Martinez:

"I talked to a scout from another organization that said he's like the next Pedro Martinez," Kubatko said. "There's no way the Phillies are giving him up."

In the aforementioned midseason prospect ranking by Baseball Prospectus, Sanchez, who was still 18 when the piece was published, checked in as the No. 3 overall pitching prospect and the No. 18 prospect in the entire sport. He figures to leapfrog 2016 No. 1 overall pick Mickey Moniak and become the Phillies new top ranked prospect in 2018 Spring Training organizational prospect rankings.

Though he didn't have as much success in his first experience in High-A ball with the Clearwater Threshers, Sanchez struck out 64 batters and posted a 2.54 ERA in 67.1 innings across 13 starts for the Lakewood BlueClaws in 2017. The Phillies have been especially cautious with pushing the innings of their talented young prospect, which makes sense when you consider that scouting reports suggest that he possess the rare combination of great control and a fastball that can reach in the high-90s.

Martinez, who spent the final season of his career with the Phillies, was an eight-time All-Star, won three Cy Young Awards, led the American League in strikeouts three times and led the MLB in ERA five times. Martinez got 91.1 percent of Hall of Fame votes in 2015, allowing him to earn election in his first year on the ballot. Will Sanchez top that? Probably not. Still, in terms of repertoire, the comparison makes some sense.

Sanchez, should he continue to excel through the minor leagues and reach his full potential as a major leaguer, wouldn't be a horse-type ace, in the mold of Roy Halladay or Justin Verlander. Rather, he would be more in the mold of Martinez, a pitcher with dominant stuff, capable of winning an ERA title.

At 19, Sanchez is far from a sure-thing. A lot can happen between Single-A and the major leagues. Domonic Brown, who was further along in his career than Sanchez is now, was famously once ranked as a higher prospect than Mike Trout. So scouting isn't an exact science. But this scout's opinion on Sanchez perhaps will give Phillies fans a better understanding of why the organization is so protective of him, both in terms of his usage and any potential trades.