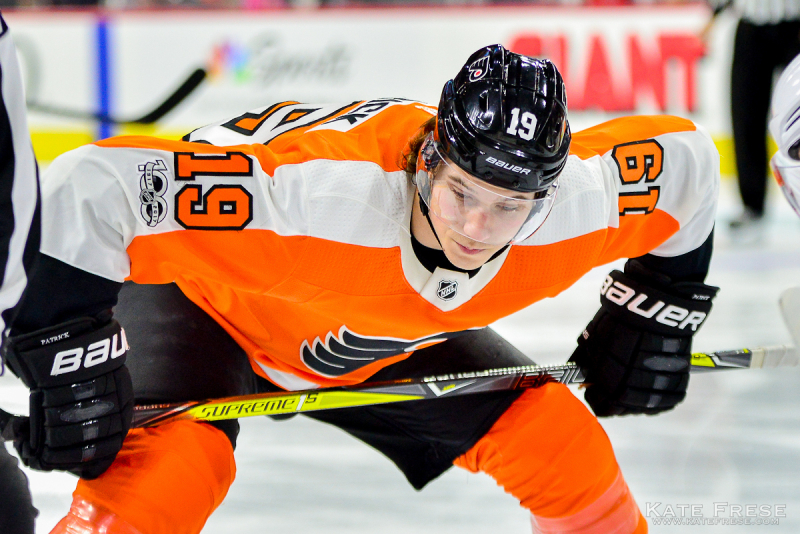 There is no physical issue with Nolan Patrick or any regressive factor warranting any type of demotion or benching. The dilemma with Patrick is that with the World Junior Championships coming up, he is still eligible to play for Team Canada.

Flyers GM Ron Hextall has already said the team will not be loaning Patrick to Team Canada for the WJC, which begins Dec. 26 and ends Jan. 5. However, Patrick is still one of Canada's top junior prospects and is currently centering the Flyers' fourth line of Travis Konecny and Dale Weise, with his minutes taking being cut recently.

The scenarios of whether Patrick stays or goes won't come into play, but here's a look at why either decision would have worked out for the Flyers.

There was good reasoning for Flyers coach Dave Hakstol to not play the fourth line as much. During the Flyers' losing streak, the team held the lead in the third period on multiple occasions and did not want to give the opposing teams a chance to take the lead away from a desperate Flyers team hunting for a win.

But with the streak over, how do you get Patrick to keep his confidence and skill trajectory trending upward? Do you allow him to ride out this struggling quagmire of a Flyers season or do you get his confidence back up by giving him the chance to dominate peers at his age and hopefully have him return the way he started the season?

With Patrick staying with the Flyers, he remains part of a team that is still struggling regardless of the last few wins. The team is young and inexperienced and a lot of players are showing signs of being timid in big moments of the game.

Before everyone jumps off the Ben Franklin Bridge, this was not an unexpected thing. Having Patrick stick with the Flyers and block his going to the World junior Championships is a double-edged sword. On one hand, it shows the Flyers commitment and value of building the team and keeping everyone around with them to grow from it. On the other hand, it could stymie Patrick's confidence going forward and hinder his growth as an overall player if nothing changes and his minutes remain what they are.

Now, realistically, the chances of it hindering Patrick are very minimal. He has shown a unique ability to adapt, overcome, perform and dominate at each level, but it is a plausible scenario and question that surely has crossed the mind of Flyers' upper management. This isn't just another top prospect. This is a No. 2 pick and potentially the future face of the franchise.

Even though Hextall has already stated he will not loan him, there would have been nothing wrong with this realistic and plausible scenario.

Giving Patrick to Team Canada would allow him the chance to return to the ice surface with people his age or younger and gives him a greater chance of returning to his dominant form in juniors that made him the second overall pick. This can potentially boost his confidence and allow him to come back to the Flyers refreshed and in a mindset where he can show that incredible vision and playmaking ability that was briefly on display before his concussion earlier this year. It could also have him come back and jumpstart players around him.

The drawback to that is that there is no guarantees that this works or it could backfire with an injury, and that's the worst case scenario for the Flyers.

But back to reality. Patrick is staying and is going to learn first-hand the ups and the downs of an NHL season, the bumps and bruises and what it is like to be a player and on a team struggling through an 82-game season. It also continues to build a bond with his teammates through those times.

It's a cold and valuable lesson that every NHL player needs to learn at some point in their careers regardless of talent and it is what is honestly needed in order for this team to grow and reach their potential.

This team is going through the growing pains of being a young team. Keeping Patrick around allows him and his young teammates to experience the hardships of an NHL season and learn from it and grow into the players they can be. It pushes him to make himself better, even when he isn't getting a lot of minutes.

Yes, he is potentially the next face of your franchise and he is not getting a lot of minutes now, but that does not mean he isn't growing as a player. Patrick is growing in his everyday maturity as a player. Growing in that aspect, will translate into growing on the scoresheet. He is learning how to adapt when things are bad and to make himself and his teammates better.

That's a lesson that needs to be learned by all players and based on Patrick's playing history, he will be very good from all this. It's fine to ask and play these scenarios with a player like Patrick, your next franchise cornerstone, but it is imperative for everyone to see the big picture. That big picture is growth as a player.

The bigger picture from player growth is team growth, and that's the big Mona Lisa that Hextall is trying to paint.