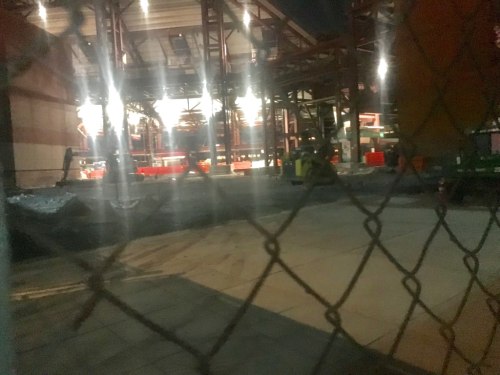 PHILADELPHIA — Back in early October at his state-of-the-team news conference, Philadelphia Phillies president Andy MacPhail hinted that "investments in the ballpark and in the fan experience" are soon on the horizon for the oldest venue in the National League East, Citizens Bank Park.

It appears those planned investments are beginning to become a reality, as many areas of construction are visible at the soon-to-be 14-year-old venue. One area includes the complete removal of the Right Field Gate entrance, as well as the former Games of Baseball and Bull's BBQ entertainment and dining areas.

According to MLB.com's Todd Zolecki in October, the club's planned upgrades to Citizens Ban Park this offseason includes: installation of and improvements to security — via likely bollards around the ballpark —  new public-address and lighting systems, and upgrades to the fan experience.

Permit No. 821877, filed on Wednesday, Nov. 8, appears to be the Phillies' answer at permanent solution for protective netting for their right field grandstand scoreboard. In August 2016, a weld separation and motor smoke from this scoreboard caused the closure of two right field sections during the Phillies' matchup against the Los Angeles Dodgers.

The permit covers "the removal and replacement of protective netting attachment assembly for the right field grandstand out-of-town scoreboard at Phillies stadium, as per plans; no other work on this permit."

All gates likely will see an improvement to security screenings, allowing for expedited entry into Citizens Bank Park. As Zolecki hinted, bollards are also planned to be added around the ballpark. No active permits indicate immediate plans for either, however.

Permit No. 832761, filed on Nov. 16, could represent the Phillies' planned new public address system. The permit states the planned replacement of "905-speakers with the exact replacement speakers, reuse old brackets, one for one replacement with no additional wiring as per 2008 nec (south district)." A construction crane — donning a large United States flag — was visible from inside Lincoln Financial Field for the Philadelphia Eagles' Divisional Round playoff game against the Atlanta Falcons on Saturday. (Photo: Matt Rappa/Sports Talk Philly)

Upgrades to lighting appear to be made possible via the large crane located at the First Base Gate entrance on Pattison Avenue. According to Permit No. 828114, filed to the City of Philadelphia on Nov. 21, former field lights are being replaced with new LED lights, in addition to the installation of new steel fixture mount assemblies.

Improvements to fan experience, according to Zolecki, are expected to be "geared toward fans who prefer to wander the ballpark, rather than sit in their seat from first pitch to last pitch."

The Rockies have a wildly successful party deck in the upper deck in right field at Coors Field. Ballparks like AT&T Park and Citi Field have Wiffle ball fields for kids, which are huge hits with families. Both are possibilities in the redesign.

The main focus for improving fan experience appears right now to be the Right Field Entrance gate and the former Bull's BBQ area. Time will tell what goes in this area, and if/where Bull's BBQ returns to the ballpark. Perhaps "relocation of Hall of Fame" refers to moving the Phillies' Wall of Fame, which lacks room in its current, center field location, to this redesigned Right Field Gate area.