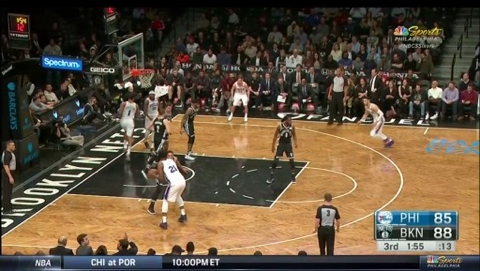 The Philadelphia 76ers (24-24) are back at the .500 mark after losing their third straight game tonight at the hands of the Brooklyn Nets (19-33), 116-108. Spencer Dinwiddie was lights out from the line and D'Angelo Russell was dominant off the bench. Despite keeping their turnovers in check, the Sixers could never take control in a game they most certainly could have won. After winning seven of nine to start the month of January, the Sixers have lost three in a row and closed out their road trip 1-3.

Brooklyn was led by the duo of Spencer Dinwiddie and D'Angelo Russell. Dinwiddie started at the point and dropped 27 points, hitting 13 of 15 from the line. D'Angelo Russell contributed with 22 points off the bench as the Nets shot 50.6 percent from the floor and 40.6 percent from beyond the arc en route to victory. Rookie Jarrett Allen held his own, earning a double-double with 16 points and 12 board in the win. Former Sixer Jahlil Okafor had a solid outing, scoring eight points to go along with three rebounds. Nik Stauskas finished with three.

Joel Embiid came alive in the fourth quarter, but it wasn't enough to get the Sixers back in the game. None the less, the big man finished with 29 points and 14 rebounds in 36 minutes. Ben Simmons had a strong first half, scoring 18 points, but was much less aggressive in the second half, adding just six points to his total for 24 to go along with seven assists. JJ Redick had 20 points after missing seven games with a knee injury. Philadelphia only had eight turnovers, but a hot shooting Nets team was too much for them to handle in their third straight defeat.

Meanwhile, Robert Covington continue to struggle, taking just three shots the entire game and getting beat multiple times on defense, which is supposed to be his specialty. After going 0-for-8 from beyond on Monday, Dario Saric was 3-for-12 from the floor tonight.

Ben Simmons got the Sixers going in the first, scoring the team's first six points. Dario Saric and Joel Embiid hit back-to-back triples to put the Sixers ahead 14-7 early on. Jahlil Okafor got his first action in the first quarter, but picked up three fouls in just three minutes. He bit on a vintage Embiid pump fake for the third foul. The Sixers led by four, 34-30, at the end of one. Simmons finished the first with 10 points.

Brooklyn began the second on an 8-0 run, taking a 38-34 advantage just over a minute into the quarter. Ben Simmons broke an over 5:30 span of no field goals for the Sixers with an emphatic slam at the 8:30 mark to keep the deficit at four, 45-41.  A three-point play from JJ Redick gave Philadelphia the lead, but Brooklyn responded with a three to lead 52-50 with 4:36 left in the second. A DeMarre Carroll triple hit a three to put the Nets back up by seven, 58-51 with just over three minutes to go. The Sixers responded with an 14-6 run to go up by one, 65-64 after two quarters.

At the half, Ben Simmons led Sixers scorers with 18 points on 9-for-11 shooting while Joel Embiid and JJ Redick tallied 14 and 13, respectively. D'Angelo Russell ended the first 24 minutes with 17 points on 6-for-9 shooting off the bench with Spencer Dinwiddie contributing with 14. Brooklyn shot 8-for-16 from beyond in the first half and the Sixers hit four of nine from long range.

The Nets came out of the locker room strong, putting together a 7-2 spurt to start the third and take a 71-67 lead. A Covington three gave Philadelphia a 74-73 advantage with 7:30 left in the third, his first make of the night. The Nets hung around though, keeping the deficit at just one, 83-82, with 3:47 to go in the third. Brooklyn took the lead after three though, 91-88, despite the Sixers only having five turnovers.

The Sixers took a 92-91 lead to start the fourth, but a Nik Stauskas triple put the Nets back in front 94-92 with 8:50 left in the game. Brooklyn continued to add to their lead, extending their lead to double digits, 102-92, with 7:04 to go in the fourth after a bucket from Jahlil Okafor. A Redick three cut the lead to eight with 5:18 to go in the game, but the Nets struck right back with a bucket of their own to maintain a 10-point advantage. Joel Embiid did his best to keep the Sixers close, playing some power ball in the post against rookie Jarrett Allen, hitting a pair of free throws and a tough bucket in the paint to cut the lead to six, 111-105, with 3:03 to go. Unfortunately, the Sixers wouldn't be able to overcome the deficit, falling by a final score of 116-108.

The Sixers host Miami on Friday night at 8pm on ESPN before traveling to Indiana on Saturday night for a back-to-back. Joel Embiid is expected to play in both contests.

So at the end of the game, the Sixers took 12 seconds to foul the Nets player? Who do we blame for that? Is it Coach Brett Brown not telling them to foul or did the players have a brain cramp and forget to foul? Ala and Zumoff were saying to foul and then it took 12 seconds? I like Brett Brown, but I question a lot of stuff like this he has done over his tenure, and I honestly think the guy gets a pass in city sometimes.