Eagles Flyers Phillies Sixers About Us Write For Us
Around the NFL: Wild weekend sets up unpredictable championship games
NFC Championship Breakdown: Receivers and Running Backs 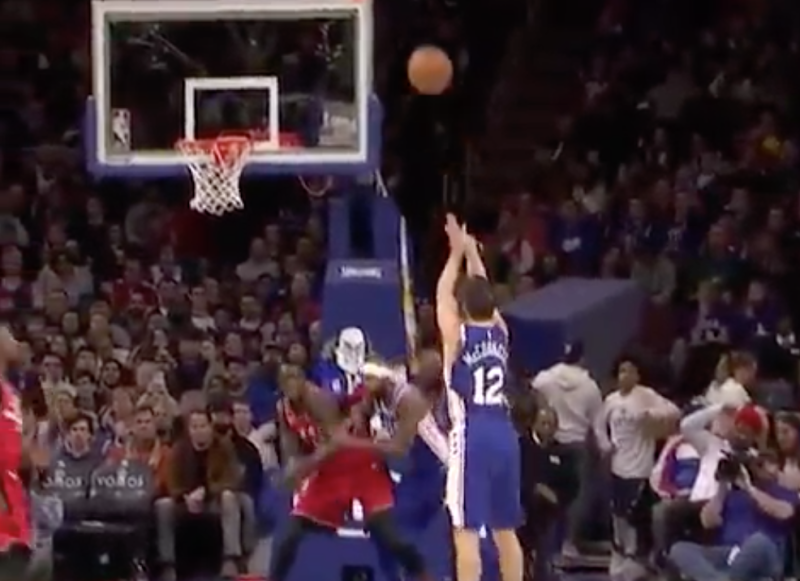 The Sixers blew a 20 point lead, but, this time around, held on to win. Six Sixers (oh dear, a 3rd "six" would've been bad) put up double digit points.

Joel Embiid and Ben Simmons scored the Sixers' first 20 points. Embiid had 12 and Simmons with eight. The streak ended simply because both players ended up on the bench. That's still pretty impressive but an indication of how valuable they are.

The Sixers were up 20-16 when both Simmons and Embiid left the floor. By the time either one of them came back, the Sixers were still leading, 27-21. Good sign. In the meantime, JJ Redick actually kept the Sixers afloat with a burst of five points.

By the end of the 1st quarter, the Sixers were up 32-23. They shot 61.9 percent from the field. They only had two turnovers.

Again, fans who have watched the Sixers consistently are not surprised by these numbers. They are common. Wake us up in the 3rd quarter.

Trevor Booker actually had a really solid quarter. He had 7 points on 2-2 shooting from the field and 3-3 shooting from the free throw line. He and Redick carried the scoring load a bit while Embiid and Simmons sat. That's always been a problem for the team: Finding outside sources for points from Embiid and Simmons. Dario Saric is good for that too, but he's not always consistent.

The Sixers did their best to blow the lead during the second quarter, but the Raptors simply could not score. However, they got fouled and made points at the free throw line to slowly crawl back into the game. The Raptors went for about four straight minutes without a field goal.

The Sixers led 47-35. The Raptors' scoring drought extended to five minutes, and the Sixers continued to take advantage. However, the Sixers also kept fouling, and the Raptors kept making their free throws. They were 15-16 from the line.

At the half, the Sixers led 59-49, and looked to be in decent shape. But, it's all about that second half. The Sixers shot 55.8 percent from the floor. They had nine turnovers. Yes, turnovers are a key factor to keep track of for this team. After that hot start by Embiid and Simmons, they ended the half with 26 points. But, Redick, McConnell, and Booker all chipped in to help keep things flowing from a scoring standpoint.

Simmons only played nine minutes as he was dealing with foul trouble. We'll have to see how the second half goes for him. He was aggressive for points, but he also didn't have any assists...or rebounds...or steals. He had eight points but had three fouls and two turnovers. It's unusual to see an empty box score from Ben, but he has the second half to finish that up.

Embiid had 18 points, four rebounds, and one assist. He was a headache for the Raptors in the paint, and it seems like the Raptors had no answer for him.

The second half started off...not ideal. Simmons picked up his 4th foul in 29 seconds of play. He stayed in the game. The Sixers did extend their lead to 67-51, however. The Sixers kept marching on to a 76-57 lead.

It has to be said, the Sixers' defense for the game had been...good. Yeah, they fouled a lot. However, the Raptors shot under 40 percent from the field for most of the game, which is a good sign and a big part of why the Sixers were able to extend the lead to 19 points.

However, the Raptors made a little push and the lead was down to 76-62. Fans began to get uneasy, knowing that this could be another horrific ending to a solid game thus far. The Sixers called timeout.

The Sixers then responded by going up 82-64 with 3:28 seconds left in the 3rd quarter. Would they be able to hold on? Well, by the end of the 3rd quarter, the Sixers led 93-75, which is absolutely wonderful. Embiid had 25 points, six rebounds, and two assists. Redick had 15 points on 3-3 shooting from beyond. McConnell had 14 points and seven assists. Simmons continued to be silent with his foul trouble.

The Raptors slowly crept into the lead. They were down 97-84 with 9:25 left. Then, 97-86. Embiid took a seat shortly after. The Sixers stayed alive, keeping a 99-88 lead with 6:57 left in the game. But, even with Embiid coming back into the game, the Sixers continued to struggle as their lead shrank to 99-92.

Redick had to leave as he suffered a non contact injury. He injured himself and then immediately left the court. Meanwhile, the Sixers continued to barely hold on. It's officially a game now, with the Sixers up 102-96 with 4:01 left to go.

It got uglier as the Sixers were up 102-101 briefly. But, then, the Sixers finally responded and grabbed five straight points to go up 107-101 with 2:13 left. Ultimately, the Sixers outlast the Raptors' advances and won the game.

TJ McConnell had his career high 18 points, and he picked up the slack as Simmons struggled during the game. McConnell's impact on the floor is incredible and it cannot be taken for granted. His defense and hustle is always on point and he carried the team, particularly in the second half.

Embiid continued to be a problem for the Raptors. They simply had no answer for him. Well, the turnovers are still a major issue. Applying pressure to Embiid does get results. Still, he dominated the Raptors in the paint with great footwork and pure determination.