Eagles Flyers Phillies Sixers About Us Write For Us
NFC Championship Breakdown: The Quarterbacks
Around the NFL: Wild weekend sets up unpredictable championship games 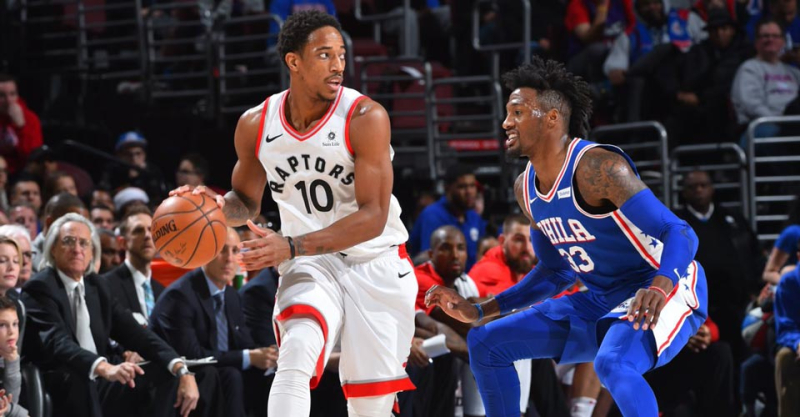 Will the losing streak end?

The Sixers have lost four straight to the Raptors, going back to last season. They have lost all three games for this current season and are at risk of being swept by the Raptors. However, the last Sixers win against the Raptors was on January 18th 2017, so the hope is they can keep their January win streak alive.

Of course, before that January 18th win, the Sixers had lost 14 straight against the Raptors. Um...so that's not good. But, the Sixers' win before that big losing streak came January 18th in 2013. But, the last time the Sixers faced the Raptors on January 15th (in 2007), they lost by 18 so all kinds of numbers from history. Sixers seem to win on the 18th. It is time to petition the league to have Sixers-Raptors games on the 18th of January each season.

The Sixers have a very obvious game curve. They generally march to a double digit lead, or at least hang with the best of the bunch for the first half of a game. Then, generally in the 3rd quarter, the Sixers fall apart.

Specifically, in their special London game against the Celtics, they were up by 22 points in the second quarter, but only led by 11 going into the break. They had no turnover issues, they were making efficient plays and taking good shots. The offense looked good against one of the best defenses in the league.

If you were just a casual observer, you'd think the Sixers had full control. But, people who watch the Sixers closely knew that lead was a good as a one point lead.

Most of the blown leads seem to stem from the offense simply shutting down. It's a combination of things. Lack of quality roster depth. Turnovers. Defenses (opponents) making adjustments, and more. But, the Sixers seem to really have a turnover issue. Like, they will commit a series or burst of turnovers that help ignite a comeback for the other team.

Even if the Sixers don't score, it's imperative they take care of the ball and not give the other team extra chances to beat them. Don't give teams potentially easier looks on the fast break.

Taking advantage of no Lowry

It looks like the Raptors will continue to be without star(ing) point guard Kyle Lowry. He didn't play against the Warriors and there's no current indication he's going to suit up in Philly. He had a pretty nasty fall against the Brooklyn Nets and has been out for about a week.

According to Raptors' official Twitter account, he seems to be in Philly, as there was a clip of him walking through wearing a Philadelphia Eagles hat, since Lowry is a Philly native. So, he's likely with the team, but it remains to be seen if he plays.

If the Sixers end up facing a Lowry-less team, it's not a green light to mean things will be easier. The Raptors have learned how to use a balanced attack, which is important considering the past few seasons consisted of mostly hero ball, which is fairly easy to stop for a defense.

The Sixers will need to keep an eye on everyone on the floor. However, wtihout Lowry, the Sixers can expect less drives to the basket, and for the Raptors to be without a leader, which are definitely things that can be taken advantage of. Less drives to the basket equal less chances of fouls (for, for Laowry, "superstar" calls) and it gives the Sixers' defense a chance to breathe for a little bit.