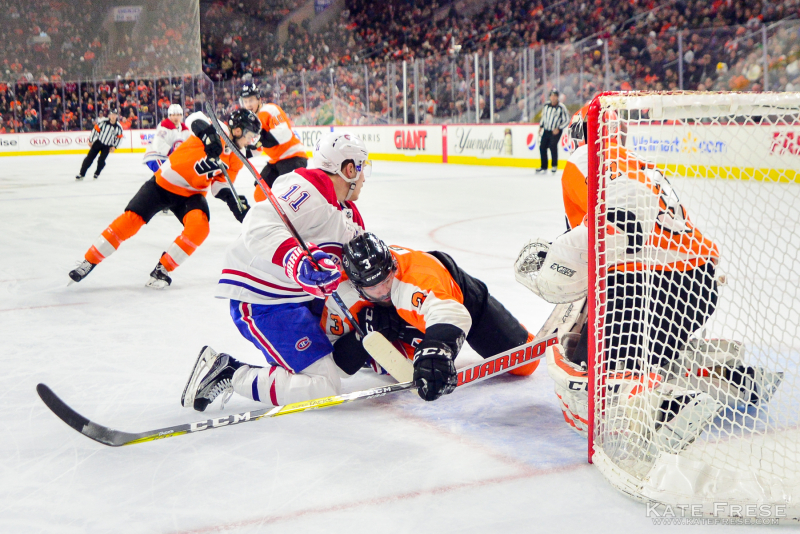 There's no such thing as a convenient time for injuries to mount. And when you're a team looking to extend a point streak to nine games, you'll have to shake things up to have a chance to do that.

The Flyers changed several things up on Monday, acquiring Petr Mrazek from Detroit and recalling Oskar Lindblom from Lehigh Valley. Lindblom replaces Wayne Simmonds, who will be sidelined from 2-3 weeks, while Mrazek provides stability in net for the next few weeks as Michal Neuvirth and Brian Elliott recover.

Off the heels of an exciting 7-4 win against the Rangers on Sunday, the Orange and Black have a chance for points in their last nine games. That opportunity comes against the Montreal Canadiens, who six just six points away from the Eastern Conference's basement. This will be the second of three meetings this month between the Flyers and Habs, as they move through their season series pretty quickly.

When the Flyers and Canadiens last met on Feb. 8, Travis Konecny was an absolute force, earning the second multi-goal effort of his career with the opening goal in the 2nd period and an insurance marker in the 3rd. He's earned four goals and nine points over his last six games, and torched the Rangers with three points on Sunday. Konecny's been playing confidently all season, and continues to provide a secondary scoring threat.
Also, keep an eye out for Oskar Lindblom in his NHL debut, where he's expected to figure into the third line. In 54 American League games this season with the Lehigh Valley Phantoms, Lindblom has 16 goals and 34 points, and represented the Phantoms at the AHL All-Star Classic.
When healthy, Brendan Gallagher's always a threat in the offensive zone, and has earned points in four out of his last five games. Despite a rough year for the Canadiens — one that sees them currently tied with Ottawa for second-last in the Eastern Conference — Gallagher's three goals away from tying his season-high.

It's no surprise that Alex Lyon's looked shaky in his limited action so far this season — completely expected from a guy who's been tossed from the frying pan into the fire — but he was nothing short of phenomenal in the Flyers' 7-4 win on Sunday. He made 25 saves on 26 shots in relief of an injured Neuvirth, earning his first professional win. Despite the Mrazek trade, he'll earn the start tonight.

It's been quite a rough year for Carey Price, between injuries setting him back and a cavalcade of misfortune for the Tricolore. He's winless in his last four games, and is just six losses away from tying his career-high. Nonetheless, he'll still give the Canadiens a chance for two points when he's between the pipes.

With Wayne Simmonds out for 2-3 weeks, Jordan Weal will slide up to the second line, and Oskar Lindblom will take over on the third line. Petr Mrazek will serve as a backup.

Where to Watch
TV: NBC Sports Philly
Radio: 97.5 The Fanatic