Flyers Remarkable Run to Playoffs Has Division Within Reach 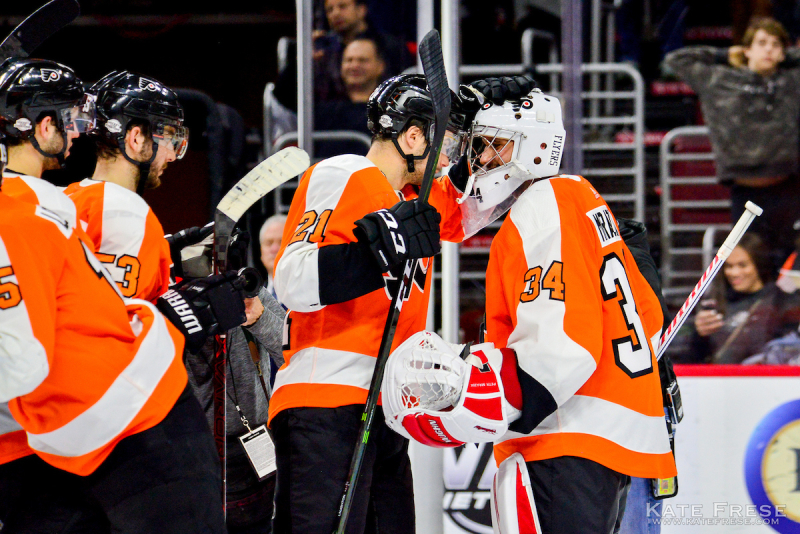 When the Flyers returned to action on Nov. 27, the Monday after Thanksgiving, there was a determination to exercise the demons of the previous seven games, all losses.The Flyers took a 3-1 lead into the third period in Pittsburgh that night. That lead was gone within two minutes. They had a 4-3 lead late in regulation. That vanished. They lost the game in overtime for their eighth straight loss.

The next night, the Flyers hosted the San Jose Sharks and looked rather lifeless and indifferent, falling 3-1 for their ninth straight loss. There was a team meeting after the game. There were three days off before their next game, another lifeless loss to the Boston Bruins, 3-0. Ten in a row.

The Flyers were 8-11-7 with 23 points in the standings, dead last in the Metro, tied with Florida for the second lowest point total in the East and fourth lowest in the NHL. The word playoffs was met with laughter. It was a joke to think this team would be playing beyond April 7.

There have 37 games played for the Flyers since then. Out of a possible 74 points in the standings in that time, the Flyers have earned 55 with a 26-8-3 record. The playoffs are no longer a question. They are essentially a lock. And the Flyers remarkable run now has a division title within reach.

The Flyers remarkable turnaround began on Dec. 4 in Calgary, the first of six straight wins for the Flyers that had them slowly making up ground in the standings.

As good as the six straight wins felt for team morale and overall rise in the standings, the Flyers ended 2017 on a bit of a slump. Their winning streak ended on Dec. 18 against the Kings in a 4-1 loss. They won their next game against Detroit, then dropped three straight, one in a shootout.

But they ended the year on a high with a 5-3 win in Tampa against the NHL’s best team, and at the end of 2017, the Flyers had used a 8-3-1 run over 12 games to climb back to within five points of a playoff spot.

January opened with a lackluster 5-1 loss to Pittsburgh, but then a string of four straight wins, spanned by the five-day bye week. The Flyers lost to the New York Rangers, 5-1, on Jan. 16, then reeled off four more wins, including an overtime win over Toronto and wins against divisional foes New Jersey and Washington.

To that point, the Flyers were 8-2-0 in the month of January, and had not only climbed back into the playoff picture, but were third in the Metropolitan Division, tied with New Jersey at 56 points. The problem was that it was just three points back to the first team out of the playoffs, leaving very little margin for error.

The Flyers entered the All-Star break with a 5-1 loss to Tampa Bay to drop them back to the final wildcard spot, just one point ahead of the first team out of the playoffs.

When play resumed the following week, the Flyers fell to Washington and New Jersey in regulation on back-to-back nights, and were in danger of doing the same to Ottawa on Feb. 3 before a pair of late goals forced overtime. The Flyers lost in a shootout for their fourth straight defeat, but that game started a points streak that has been ongoing ever since.

As the Flyers entered play that Saturday, they were tied for the final wildcard spot and hanging on to it by a thread. By only getting one point in that game, the Flyers fell out of the playoff picture going into their game in Carolina on Feb. 6.

The Flyers won in the final seconds of overtime that night. They won in a shootout in Arizona and in regulation against the Vegas Golden Knights to sweep a weekend back-to-back on the road. A shootout loss to New Jersey halted a four-game winning streak, but the flyers rebounded with an overtime win in Columbus, a wild win in New York and back-to-back home wins against Montreal and Columbus.

They closed February out with a pair of road wins in Ottawa and Montreal to finish February with a 10-1-2 record, including wins in six straight games, and 10 of the last 11. The margin to the final playoff spot is 13 points. The Flyers held the division lead for a day, before a Washington win pushed them back into second, one point off the lead.

So now, the Flyers goals have shifted. The playoffs are more than likely happening now, and they are turning their attention to playing more games on home ice. They would host the opening two games of a playoff series if they lock down the second seed in the Metro, but a division title would likely give them a more favorable matchup.

Regardless, the Flyers organization as a whole deserves credit for the turnaround that has happened.

For GM Ron Hextall, there was no knee-jerk reaction to the team’s lack of performance in November and into December. There was no outrageous trade or move that showed a change in direction.

Hextall even stayed the course in his own expectations for the team. Throughout the losing streak, Hextall assured that these were close games where the bounces just didn’t go the Flyers way and the objective was still the same. This was a playoff team in his eyes.

In addition, as the Flyers started to make their push toward the playoffs, Hextall acted when the Flyers needed to acquire a goalie and brought in Petr Mrazek to fill the void left with injuries to Brian Elliott and Michal Neuvirth.

This was more than just a move to ensure the Flyers had a veteran in net and didn’t rely on a rookie to help make the playoffs. This was a vote of confidence for the team that worked so hard to get out of the basement of the division and start to become a playoff contender.

For as much heat as Dave Hakstol has taken in his time with the Flyers, he is also a central part of this turnaround. Sure, there are still lineup decisions that may be head-scratching, but Hakstol has really been setting the Flyers up for this kind of success from the beginning.

Moving Claude Giroux to the wing has completely changed the captain’s level of production. It’s also been the biggest boost of Sean Couturier’s career, now solidified as the team’s No. 1 center. Adding Travis Konecny to the top line further solidified the trio on the first line.

Defensively, what more can you say about the decision to put Ivan Provorov with Shayne Gostisbehere on the top defensive pairing. The chemistry the two have is tremendous and it has been a complete game-changer for the Flyers on the back end.

Hakstol has also adjusted well to the adversity thrown the team’s way. Nolan Patrick has been used in a larger role with Wayne Simmonds out.

Of course, the Flyers aren’t in this position without the play of the players. This isn’t just a hot streak. This is a team that is starting to form an identity of winning.

Back in December, the players had to look in the mirror. The thoughts of what could happen with another wasted season had to be creeping in, especially for the veteran core. There was a chance that this ride was over before it had a chance to get started, and changes would likely be coming if it didn’t.

In the three months since, the Flyers have completely changed the approach and attitude. It’s a determined team on a regular basis. It’s a structured team that has typically given very little defensively and applied offensive to bring balance to the lineup. More than anything, it’s a team that has a confidence and swagger about them that has completely changed the outlook of the season.

Perhaps the best part of this resilient run is that very little has changed in the makeup of the roster. Injuries have been fairly limited until the recent news of Simmonds’ absence and the goalie conundrum. There was no help from outside the organization. There was no bold and brass move in management or coaching to ignite a fire within the locker room. This was pure determination to turn the season around.

The Flyers have not only turned it around, they have completely turned expectations to the point where a division title is a realistic possibility. But for now, it’s all about the next game for the Orange and Black, and the final stretch run to the end of the regular season.