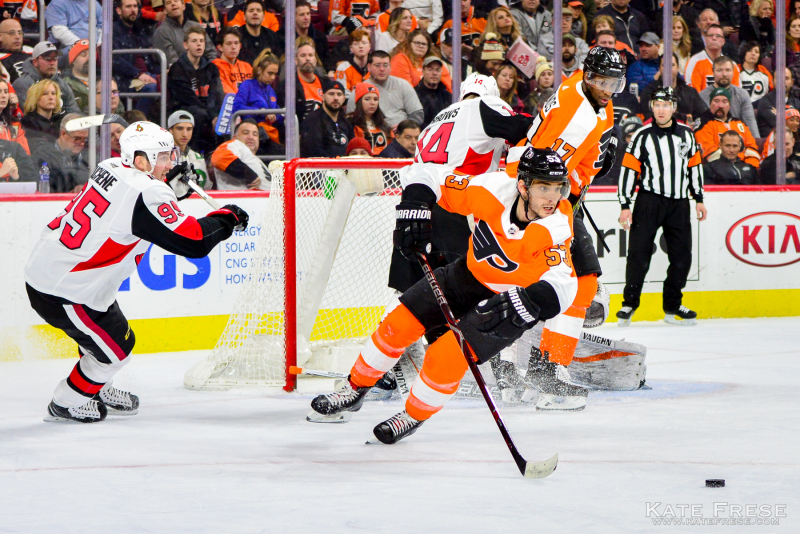 The Philadelphia Flyers are in search for an elusive fifth-straight win and their first victory over the Ottawa Senators this season in a Saturday afternoon tilt.

Locked in a division race, the Philadelphia Flyers need to keep pace with their rivals as they search for a fifth-straight win in a Saturday afternoon clash with the Ottawa Senators at the Canadian Tire Center at 2 p.m.

Philadelphia has won four games in a row four times since its six-game win streak following the 10-game winless period. The elusive fifth-straight win will have to come against a team the Flyers have yet to beat this season in the Senators.

It's been a tough go for the squad from Canada's capital. The Senators seemingly went all in with the Matt Duchene trade and went bust. Now they've dealt Derick Brassard and there are rumors Erik Karlsson may be on the move along with a few other players.

With the trade deadline on Monday at 3 p.m. EST, many eyes on this game may be if Karlsson, Mike Hoffman, Zack Smith, or Jean-Gabriel Pageau are pulled from action because of a trade.

For the Flyers, who are chasing the Pittsburgh Penguins and Washington Capitals for better playoff positioning, every game is important. With the New Jersey Devils not far behind the Orange and Black, any slip-up may put the team in a bad position for the postseason. Maintaining their hold on third place or moving up to the first or second spot is paramount for Philadelphia and losses to teams like Ottawa can put those goals in jeopardy.

Despite the rash of injuries the Flyers have suffered recently, they cannot afford to drop this matinee tilt. The injuries have shifted the lines up and that has resulted in the team needing to rely more on goaltending and defense. Petr Mrazek played well in his Flyers debut and will need to continue that play to avoid dropping a contest against a non-playoff team.

Claude Giroux has 14 points in his last eight games. With 21 multiple-point games, the man is nearly unstoppable this season. He's been held pointless in only 18 contests and never longer than two game-stretches at a time. With these numbers, the Flyers can bank on Giroux producing offensively.
As the trade deadline approaches, one name that hasn't emerged as available for the Ottawa Senators is Mark Stone. Instead, the notion coming from Canada's capital is how to get him re-signed. It's not hard to see as Stone is a point-per-game player and has 18 points in his last 13 games. He's already matched his point totals from last season and only needs ten to match his career high. Since Stone and Matt Duchene play on different lines, the Flyers will need strong defensive play again to keep the Senators' top players from beating them.

Petr Mrazek had a fine start to his Flyers career with a 19-save effort in a 2-1 win over the Columbus Blue Jackets. Mrazek didn't have a lot of work in the win but he made a variety of crucial and fantastic saves in the win. The key for the goalie will be bringing that same level of netminding game-in, game-out. He will need to be solid again versus the Senators who, despite their struggles this season, have a collection of talented forwards like Matt Duchene.

It's been a struggle for the Ottawa Senators and Craig Anderson this season. After a great season last year for Anderson despite the personal troubles his family endured, Anderson's numbers have plummeted to some of the worst in his career this season. Anderson has gone from a 15 goals-saved above average last year to a -15 goals-saved above average this year. His team is markedly worse so it's not all the 37-year-old goaltender's fault. Regardless, Anderson is still capable of stealing a single game.

Injuries: Chris Wideman is out four-to-six months with a torn left hamstring. Alexandre Burrows is serving a 10-game suspension.