Eagles Flyers Phillies Sixers About Us Write For Us
Phillies tab Lively for spring debut in rematch against Yankees
Flyers-Canadiens: Game 63 Preview 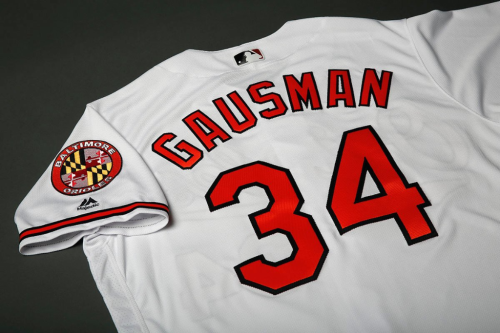 Baltimore Orioles RHP Kevin Gausman's jersey with No. 34, in honor of the late Roy Halladay who died in a tragic plane crash in the Gulf of Mexico on Tuesday, Nov. 7, 2017. (Kevin Gausman/Twitter)

SARASOTA, Fla. — Baltimore Orioles right-handed starting pitcher Kevin Gausman long looked up to late Philadelphia Phillies and Toronto Blue Jays ace Roy Halladay. So much so, the five-year veteran made it a point honor his childhood hero by switching his jersey number from No. 39 to Halladay's No. 34 for the 2018 season.

"Being a kid in love with the game of baseball, many of my afternoons and fondest childhood memories are of watching the game with my dad. Naturally I became a huge fan of fellow Colorado native Roy Halladay. He instantly became my idol. For years I watched him dominate his competition. To me, Roy gave me the inspiration that I could fulfill even my biggest dreams — being a pitcher just like him. The older I got the more I began to understand the challenges of being a baseball player in Colorado. There have been less than 100 Major League Baseball players that were born there. I'd like to think we have our own fraternity amongst ourselves.

The loss of Roy was tragic and is saddening, but I feel honored to have watched everything he achieved. I plan to wear #34 next season to honor Roy Halladay both on and off the field."

Gausman, 27, made his spring debut on Monday, donning his new look against the Detroit Tigers at Ed Smith Stadium.

After the first two Tigers batters singled off him in the first, Gausman worked a strikeout of James McCann and induce John Hicks to ground into a double play, ending the scoring threat. Gausman could not escape trouble in the second, however, allowing five of his six batters faced to reach. When the inning's sixth batter, Leonys Martin, singled to center field, Gausman backed up home plate and collided with Jeimer Candelario on the Tigers' on-deck circle.

Both players exited due to injury, with Gausman suffering a cut near his left eye and back soreness. MASN Sports' Roch Kubatko describes what exactly transpired:

Gausman appeared to collide with the Tigers’ Jeimer Candelario while backing up the plate on Leonys Martin’s RBI single with one out in the top of the second inning. Candelario returned to the on-deck circle, flexing his leg, while head athletic trainer Brian Ebel and manager Buck Showalter checked on Gausman.

As the Orioles prepared to bat in the bottom of the second inning, Gausman was put on a cart and driven out of the stadium while holding a towel to his head. Ebel sat next to him.

Kubatko later reported that Gausman was back "and available to media" — a "good sign."

Gausman's final line resulted in surrendered five runs on six hits, a walk and two strikeouts through 1 1/3 innings. He tied with Tampa Bay Rays right-hander Chris Archer for the most starts last season in the majors, 34. Through 186 2/3 innings, Gausman went 11-12 with a 4.68 ERA and 179-71 strikeout-to-walk ratio.

The Centennial, Colorado native is 34-43 through 129 career games dating back to 2013. The Orioles and Gausman avoided arbitration by agreeing to a one-year, $5.6 million contract on Feb. 13.

While Gausman's spring debut was short-lived, him honoring Halladay will last all season long as he continues to wear No. 34.