Eagles Flyers Phillies Sixers About Us Write For Us
Flyers Remarkable Run to Playoffs Has Division Within Reach
Sixers to waive Booker, paving way for Ilyasova's return 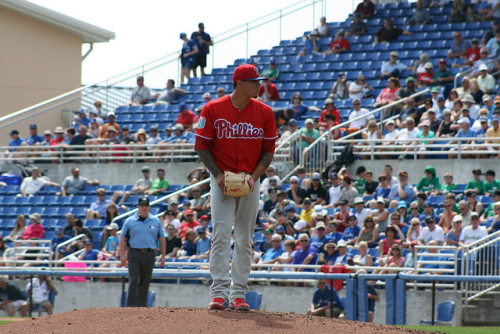 Philadelphia Phillies right-hander Vince Velasquez pitching at Dunedin Stadium in the spring of 2016. Velasquez stranded 74.4 percent of the runners he allowed on base through 15 appearances in 2017. (Frank Klose/Sports Talk Philly)

In a battle between clubs that have won just once through five Grapefruit League contests this spring, the Philadelphia Phillies (1-4) will head slightly north to face right-hander Joe Biagini and the Toronto Blue Jays (1-4) Wednesday afternoon at Dunedin Stadium.

Phillies right-hander Vince Velasquez will make his 2018 exhibition debut, his first game action since leaving his August 10 start against the New York Mets early with numbness in his right middle finger.

The Blue Jays' sole victory thus far came against the Phillies last Friday, Feb. 23, in a 2-1 victory, also at their recently-renamed home spring training facility, Dunedin Stadium. Both their runs came in the top of the first against Phillies right-hander Nick Pivetta. In their first at-bats in a Toronto uniform, former All-Stars in designated hitter Curtis Granderson and shortstop Aledmys Diaz respectively homered and hit a RBI single. The Phillies' lone run came via a solo shot by non-roster invitee outfielder Danny Ortiz in the eighth inning.

The Phillies have lost three straight games, while the Blue Jays have lost four straight.

Velasquez, 25, will look to rebound from a disappointing 2017 season in which he made only 15 starts due to his finger injury and a right elbow flexor strain suffered in late May. Over his last 10 outings, the right-hander went 0-5 with a 4.93 ERA in just 45 2/3 innings. While speculation arose whether the Phillies should transition Velasquez to the bullpen, it appears the club is giving the Montclair, California native another chance to handle the role as starter.

In an interview with 97.5 The Fanatic's Anthony Gargano on Tuesday, Charlie Manuel, senior advisory to general manager Matt Klentak, spoke highly of the three-year veteran:

"[Vince Velasquez] has electric stuff. His fastball has movement ... it kind of jumps at you. He's got a lot of talent, but we keep waiting on him to develop and get consistent. That's exactly what he needs. ... He's been a starter all of his baseball career now, and his arm and talent fits being a starter. I think he just has to be more consistent, and sometimes a year makes a big difference."

Velasquez will oppose Biagini, a 27-year-old right-hander who faced the Phillies in their Grapefruit League opener on Friday. Biagini tossed two scoreless innings and received a winning decision, allowing only a single to right fielder Nick Williams, while striking out third baseman Maikel Franco and non-roster invitee shortstop, Pedro Florimon.

“Braden, Ryan and I are so honored to have Roy remembered in this way,” said Halladay's wife, Brandy. “He will be in great company with other Phillies legends who are on the Wall of Fame. The decision made by the Phillies to induct Roy without a fan vote makes it even more meaningful. I look forward to fans and the community coming out to celebrate this special occasion with us.”