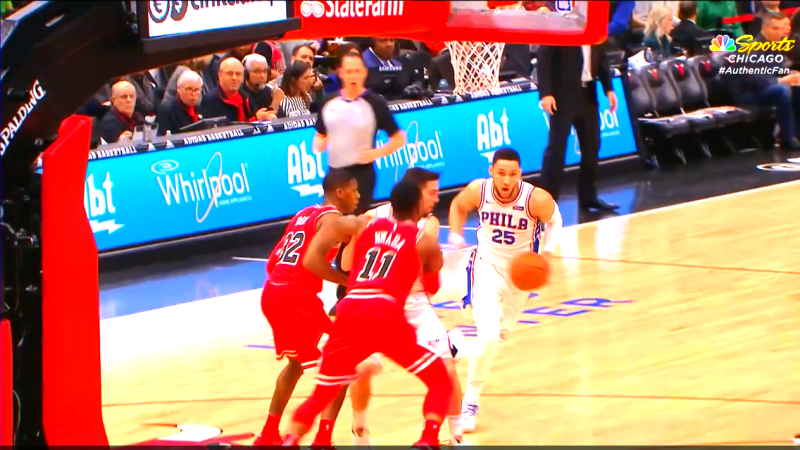 The Philadelphia 76ers defeated the Chicago Bulls 116-115. The Sixers were led by Ben Simmons, who sank two game winning free throws and finished with a career high 32 points. Joel Embiid also had 30 points in the win. The Sixers remain undefeated since their buddies, the Eagles, won the Super Bowl. The Sixers have won their sixth straight game as they begin their march to the playoffs.

The Sixers exploded to start the game up 22-7. The Sixers led by 18 points, but blew the lead all during the first quarter as they ended it up 33-29. At this point, you expect the Sixers to lose a big lead as much as you expect your precious expensive phone to hit the ground when you accidentally drop it. You know that feeling of despair because it's quite possible the screen is broken and you begin to dread the impending journey to repair it, if you decide to even bother.

Ah, but this is a Sixers recap.

The third quarter was essentially Ben Simmons being pissed off and doing whatever he wanted. He scored by almost bullying the Bulls and was dishing out assists as well.

The Sixers had a glaring problem during the game. You see this often, but it seemed more pronounced, probably because the Bulls made a consious effort to take advantage of it. Anyway, whenever Joel Embiid was out of the game, the Bulls took over the paint. The Sixers' defense inside of nonexistent. Bulls made backdoor cuts that ended with open dunks and layups. Bulls would blow by perimeter defense and meet no resistance at the rim.

All in all, the first three quarters were just good basketball if you can get over the blown lead. And, ultimately, the Bulls had no answer for Simmons and Embiid. With just under two minutes to go in the 3rd quarter, Simmons and Embid had 50 of the 89 points. They carried the Sixers for sure.

By the end of the 3rd quarter, the Sixers were up 93-91. This was a high scoring game, as you can see. However, only the Sixers shot over 50 percent from the field for the game. They were shooting 55.6 percent and the Bulls were shooting 47.9 percent. It's a wide range for shooting for the game to be so close.

For the Bulls, Bobby Punchis Portis was doing all he could to keep his team in the game. But, his career high 38 points wasn't enough.

Ben Simmons and the Sixers were down 114-115 and the Bulls had the ball. They went to inbound it and then Embiid stepped in and stole the ball with clutch defense. He passed it to Simmons who ended up being fouled. Now, Simmons is only a 56 percent free throw shooter in this first year in the league. But, he managed to sink both free throws to give the Sixers the lead and eventual victory.

Ben Simmons was asked by the NBA Philadelphia broadcast what was going through his mind when he stepped to the line. Ben Simmons, the most anti competitor of all time, said "I'm about to win this game with these free throws" and then he just did it. He won the game.

The Sixers escaped with the win, but there were a couple of glaring issues. The Sixers' bench hasn't been showing up in recent games. Also, obviously, the Sixers need to figure out how to maintain big leads. However, it's because the bench doesn't show up that allows teams to come back when starters who build the lead take a seat. As mentioned before, the Sixers have no real inside defense once Embiid is out. That's one area, but it's a big area.

This writer thought the Sixers lost the game as they were down by five points in the last minute of the game. But, they held on and got the win. Those are the wins. Those are the moments that you look at when it's the final day of the season and you're up for the 4th seed. That's what separates champions and just contenders. Sixers are not there yet, but they had a good sign of where they are going.

Overall, the Sixers played a key game. Imagine this in June. Embiid steps up his defense with a clutch steal and then Simmons sinking the free throws for the championship. Now that's the life!

Simmons had the career 32 points. He also had 11 assists and seven rebounds. Joel Embiid also had a double double with his 30 points and 13 rebounds. He also had five assists, four blocks, and three steals including that clutch steal in the closing moments.

Next Sixers game is Saturday against the Orlando Magic.