Eagles Flyers Phillies Sixers About Us Write For Us
Eagles Super Bowl parade was ultimate "you had to be there" moment
Phillies 'aggressively' pursuing veteran starter, likely looking for short-term deal 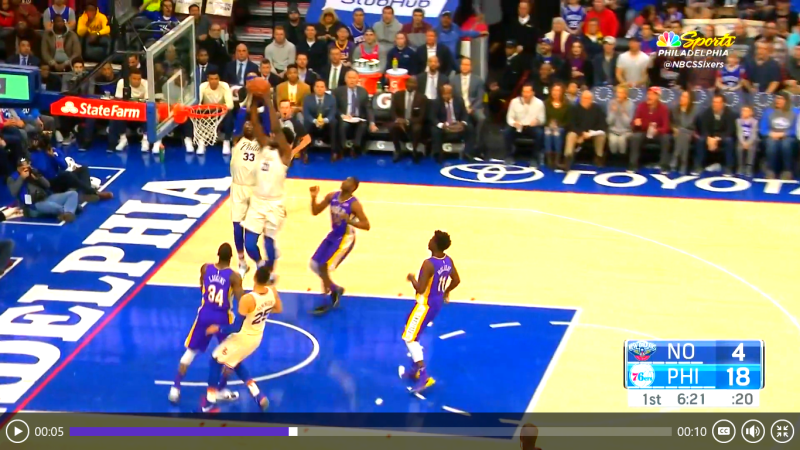 The Philadelphia 76ers defeated the New Orleans Pelicans 100-82. They have won six straight home games. The performance of Joel Embiid and Dario Saric was so sensational that they earned a new nickname. The Sixers never trailed in the game, and led by as much as 35 points. At one point, the Sixers had 80 points, and only three of them came off of the bench. It was a wild game for the Sixers as they continued to take in that city championship vibe.

The game had a delay as there was a spill courtside just before the jump ball. Considering the Pelicans just had a game postponed due to a leak in their home arena, one has to wonder if these "birds" are up to something.

Joel Embiid started off with two 3-pointers to put the Sixers up 6-0. The Sixers were up 14-2, and only three Sixers scored. Embiid with eight, Ben Simmons with four, and Dario Saric with two. Oh, yeah, and they were shooting 100 percent from the floor.

Very early on, it appeared that the Pelicans had no answer for Simmons. His two field goal makes at this point were dunks where he simply drove by DeAndre Liggins. Like, he just drove by like nobody was there. And he ended up with open slams like it was practice.

The Sixers exploded to a 23-4 lead in the first quarter. Once again, only three Sixers scored for the entire game. Saric had five, Embiid had 12, and Simmons had six. They didn't miss from the floor, either. These three guys came in and wrecked the Pelicans' world. Just destroyed them.

But, it's the Sixers. Would they be able to hold onto the lead?

The new name for the Sixers' three headed monster is Darioelben. That's DARI(o), (J)OEL, and BEN. So, Darioelben score the Sixers' first 28 points. That's mighty impressive. They alone outscored the entire Pelicans roster, obviously. The Sixers were up 28-12 when J.J. Redick made a layup. You almost forgot other players could score. So, the Sixers had a 30-12 lead.

The Pelicans got as close as nine points during the second quarter, but the Sixers otherwise held a double digit lead. By the half, the Sixers were up 56-41. Darioelben had 41 points themselves which means they were still going toe to toe with the Pelicans. Dario had 15 points. Joel had 20 points. and Ben had six points.

Darioelben also had 17 rebounds and eight assists. They blocked two shots and got four steals.

In the game preview, we looked at the potential match-up between Dario and Joel against Anthony Davis and Nikola Mirotic. The Pelicans pair were better in a lot of areas. By halftime of this one, the Sixers pair had far and away blown out the Pelicans.

That first half was sensational, but somewhat alarming. Can Darioelben keep up their pace of outscoring an entire team? Not likely. This means other players need to get on the board. But, they've struggled. Timothe Luwawu-Caborrot went 1-7 in the first half. TJ McConnell missed both of his shots. Covington only 1-2 from the floor.

Well, the second half started off nice and smooth. The Sixers were up 62-43. Then, they exploded to a 84-52 lead. The Sixers were just all over the place. They won the loose balls. They had active hands. The Pelicans couldn't make a shot, including a point blank range missed layup. It's just one of those nights for both teams.

The end of the third quarter made you think this game was completely over with. Buuuuut, it's the Sixers and it's the NBA. All it takes is one run and it's a game again. Also, the Sixers starters carried a TON of the scoring load for the team. Out of those 84 points at the end of the 3rd, only three came from the bench, and that was by the super struggling TLC. That would mean your starters need to keep grinding during the 4th, which isn't ideal on the first night of  a back to back.

The Sixers may have saw those Pelicans and said "there's only room for one bird in this city!" and sent the Pelicans packing. Will the Atlanta Hawks meet a similar fate?

Here are some interesting facts about this win: