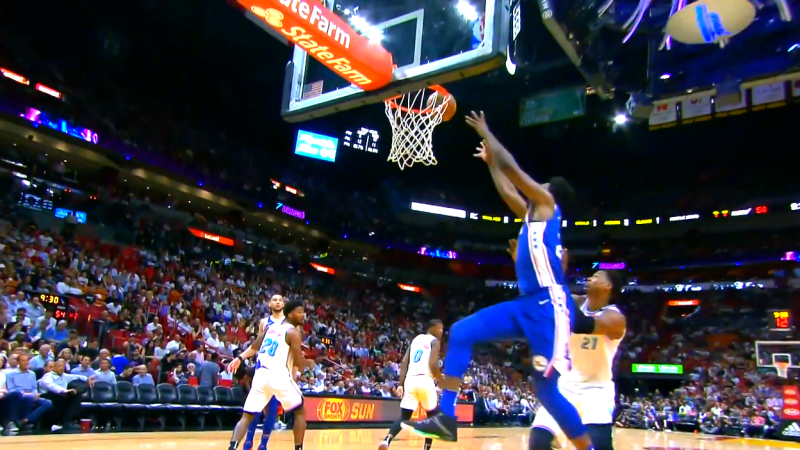 The Philadelphia 76ers lost to the Miami Heat 102-101 on a jumper from Dwayne Wade with 5.9 seconds left. Two Sixers scored more than 20 points in the constantly competitive game. While the Sixers did lose, they played well and it was a fun game. The Sixers are on a two game losing streak and missed a chance to move past the Milwaukee Bucks for the 6th seed.

Well, the first quarter was very fun. The Sixers and Heat kept it close all quarter long as the largest lead between the teams was only five points. Towards the end of the quarter, the Sixers jumped to a seven point lead.

Knowing the Sixers struggled in recent years to win in this building, there was a sense of holding your breath waiting to see if the Sixers would get blown out like the last two times they visited.

The Sixers began the second quarter reaching a nine point lead. They spent a great deal of time stealing the ball from the Heat. Even as they grabbed the ten point lead with nine minutes left in the 2nd quarter, it seemed like the game was really close.

Marco Bellineli has proven to a spark for this team offensively. In the first half, started off with seven points shooting perfectly from the floor. That’s 2-2 from the floor and 3-3 on the free throw line. He had no 3-point attempts, but he was fouled shooting a three. He’s been shooting well, which is good because he’s been sort of balancing out Robert Covington’s struggles. By the half, he missed a couple of shots bringing down his shooting percentage to 50 percent from the floor. Still not bad.

Covington had two points in the first half on 20 percent shooting. He hasn’t been shooting well recently. He’s had moments during seasons where he can hit absolutely nothing. Last season, he had a similar slump that eventually led to the Sixers fans booing him mercilessly. It doesn’t seem like he’s there now, but as things get more intense in the playoff run, one has to wonder if he sees fewer minutes on the floor and if he’s even on the floor when the Sixers need a last second shot to win a game. At least his defense has still been stable.

The Sixers grabbed a 13 point lead and then the Heat had a 15-0 run, and the Heat were up by three. However, JJ Redick came to the rescue. He made a jumper, and then made a 3-pointer and was fouled. He made the free throw for a four point play and the Sixers jumped back up to a three point lead on JJ’s six points swing.

At the half, the Sixers were up 48-45. The first half was fun, close, and intense. You could tell the teams were trying to fight for the same thing: playoffs. Even though the game was entertaining, both teams shot only 39 percent from the floor. It was truly a game of hustle and fight.

That was the first half.

The second half was more of the same. Although, Super Dario himself went on a 9-0 run to put the Sixers up 65-58. He owned the 3rd quarter as he had 12 of his 16 in that quarter alone. With Joel Embiid picking up his 4th foul, Super Dario wonderfully stepped up his game.

The Sixers were up 75-73 at the end of the fantastic 3rd quarter. Both teams showed up, and that’s really all anyone can ask for.

The 4th quarter started out poorly as Embiid picked up his 5th foul in just the first 80 seconds of the quarter. But then, Marco made two 3-pointers and the Sixers quickly got to a 10 point lead, leading 86-76. Then, the Heat responded and the Heat were down 86-82.

Things got really tight in the last minute of the game. The Sixers were tied at 95 when JJ was fouled shooting a 3-pointer. Of course, he made all three of his free throws. The Heat responded with a score to make it 98-97. Then, Embiid made a tough layup to put his team up 100-97 with 37.1 seconds left.

Wade was able to get Super Dario to bite on a fake and he went to the line for three free throws. He made all three of them and tied the game at 100.

The Sixers played that last possession very well. It ended with a WIDE OPEN 3-pointer from Redick and he missed it. The Sixers lose 102-101.

For plenty of times, the Sixers have lost games on horrible plays or turnovers. At this point, this kind of loss is preferred over that. They did everything right. It just didn’t fall. It’s not fair to call one of the greatest shooters in the game a choker. If the Sixers are going to lose a close game, this is how you’d rather see it.

Before we leave, let’s look at the positives of this loss:

• For a team that generally crashes in the clutch, that last play was everything you could ask for
• The last two times the Sixers visited this building, they lost by more than 20 points. They played much better this time around
• C’mon, this game was pure fun. Plain and simple. It would’ve been nice to see the win, but it was a good ride.

Next game is against the Cleveland Cavaliers on Thursday.