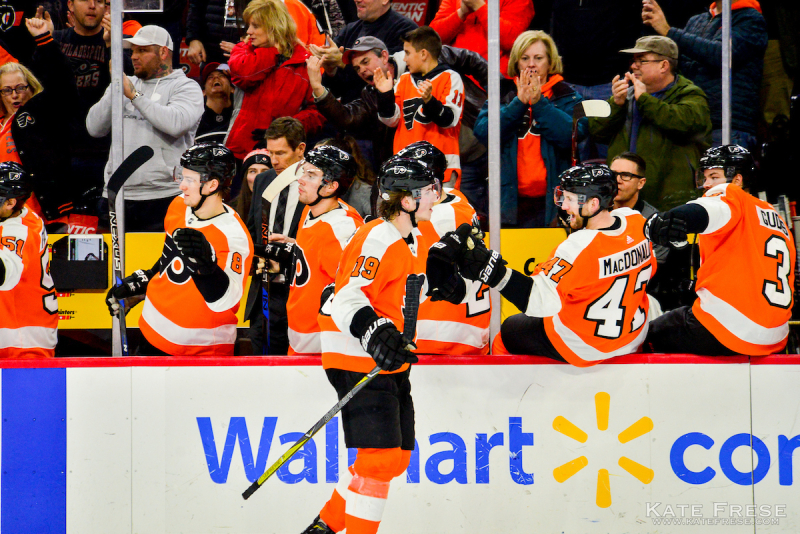 Without some key moves to shift around the lineup, some of the Flyers youngest players have been thrown into key roles. A future core consisting of Nolan Patrick, Travis Konecny, Ivan Provorov, Robert Hagg, Travis Sanheim, Oskar Lindblom and Alex Lyon have all played notable roles for the Orange and Black.

After drafting Patrick second overall in this past year’s draft, the Flyers decided to move Brayden Schenn in a trade with the St. Louis Blues, so the highly-touted rookie could center the second line.

Second-year Flyers Provorov and Konecny, who were both drafted in the 1st round of the 2015 NHL Draft, are performing exceptionally well in their sophomore years in the NHL.

Even at such a young age, Provorov is playing like a true NHL veteran, making some tremendous plays deep in his own zone and averaging roughly 20 minutes of ice time per game.

On another positive note, both Konecny and Patrick have blossomed since jumping up to the top two lines. Konecny and Patrick’s speed benefits the top six, but Konecny also possesses the grittiness to battle against the boards and get to the dirty areas that not many other players are willing to do.

For Patrick, it’s the little things that he has been doing that has most notably caught the eye of head coach Dave Hakstol.

"Patty’s a good player," Hakstol said. "His approach to the game and his hockey sense and intelligence is what gives him an opportunity to be successful in any situation. Each time, we’ve been able to give him a little more opportunity and he’s taken advantage of that. Again, it’s not the areas of the game that end up under a spotlight or highlight reel that, a lot of times, are important at this time of the year.

"It’s the little things and Nolan is doing a lot of those little things on a nightly basis, up and down the middle of the rink, playing a good 200-foot game. The fact that he’s taken pride in that is really the foundation of his game."

The 19 year-old Patrick said back in late February that "the last 15 or 20 games, I’ve been feeling myself. Gradually over time, you get more comfortable. [Hakstol] has been great. When I first got here, they made me work for everything. They didn’t put me in situations that I wasn’t ready for. Even now, when I’m not playing great, he does what’s best for the team. He’ll hold me back or not put me out there when I’m struggling on face-offs. He notices that and he’s been huge for me."

Blueliner Hagg has also been phenomenal in his rookie season. Although he only has nine points -- three goals and six assists -- in 70 games, his role has been more effective as a shutdown defenseman and a heavy hitter breaking up plays. Hagg is third in the NHL in hits with 238. Sanheim is playing a different role as an offensive threat, but of course still shows that defensive factor.

The good news for Philadelphia is that the young guns are heating up at the right time and showing promise at such an early point in their NHL careers. That rapid development could propel them and the rest of the Flyers into the playoffs.