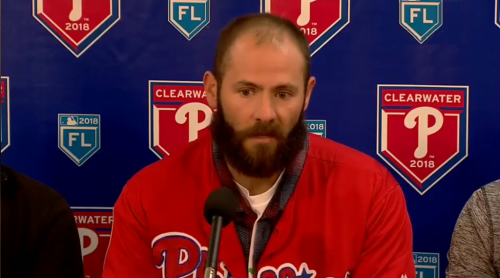 "I couldn't be happier to be a Phillie. I look forward to getting on the field with my teammates and winning some games."

Arrieta began the press conference by immediately acknowledging Phillies brass, first being Managing Partner John Middleton for making his three-year, $75 million signing "possible," and for believing in him that he has "the capability and ability to come to this organization, do some great things and help move the needle in a positive direction."

"That's exactly what I look forward to doing with the group of players that we have in this organization," Arrieta said. "It's a tremendous reunion for me and being around a lot of guys that I was fortunate to be with in Baltimore, in Matt, [Assistant General Manager] Ned [Rice] and [President] Andy MacPhail. [Director of Player Development] Joe Jordan was the guy that drafted me in Baltimore."

"This is a very special situation for me. It means a lot. This was a situation that took a long time to develop, but thankfully we got to this point, we're here now, and I look forward to putting that uniform on and getting started with the group of guys we have here."

Boras said the Phillies' interest in Arrieta this offseason dates back the November general managers' meetings in Orlando.

"The Phillies have been a definite interest pursuit throughout [the offseason]," Boras said. "There's a lot of people in this organization that have known Jake ever since he signed back with Baltimore. So, the familiarity with the player and the interest level was there."

Arrieta said he had no doubts that the Phillies organization is committed to winning, despite being in a rebuild. The 32-year-old went on to cite the recent Philadelphia Eagles' Super Bowl LII victory over the New England Patriots as the driving force to make the Phillies and other teams in the city "that much hungrier to get to that level."

"I feel like we're not far away. I think a 'rebuild' is a loose term," Arrieta said. "A rebuild doesn't mean that you can't win now. I think that's probably the same mindset that the players in this organization all share. I'm no different. I intend to come in here and win right away."

Boras similarly spoke highly of the Phillies' current standing and their ability to win.

"The Phillies are certainly something that brings to light the flow of competitiveness in the real. I dont think there's a wait here," Boras said. "I think there is talent here that needs experiential refinement, attitude and confidence. Certainly when you bring players in like Jake, you've put the cream in the coffee where it's ready to drink."

When asked about his departure from the Chicago Cubs organization, who Arrieta helped deliver its first World Series championship in 108 years, Arrieta said that while he cherishes the "moments and the things we were able to create as a culture and as an organization with that team," he looks forward to bringing the same "positive energy" and "mindset" to the Phillies in 2018.

"My focus is now on the Phillies organization, the commitment to winning as a Phillie, and just using the experiences that I gained in the past to each and every player in this organization's advantage," Arrieta said. "This happens to be an opportunity for me to bring a lot to the table for an organization who is close to winning, and who has a tremendous amount of talent. That's not to say that what I was able to accomplish [with the Cubs] wasn't great."

In leaving the Cubs, Boras said that the Phillies were among the teams on Arrieta's list that he would be willing to sign with this offseason under free agency.

"When Jake and I were talking early on, before the process began, he gave me the list of teams that [he would consider]. Philadelphia was on that list," Boras said. "Familiarity, seeing the league, playing against it, there's components we look at in the sense of where you pitch well, what divisions you pitch well against, how well you do. It doesn't come to a surprise ... Matt [Klentak] knows quite well about how well Jake pitches against the most competitive teams and the best teams in the National League and how well he does."

The culmination of Arrieta choosing and coming to Philadelphia was said to be a long process, as was every free agent signing this offseason in the historically slow pace that it unfolded. Still today, there are free agents that in offseasons past, would have at least garnered minor league spring invites by this point in spring training. Arrieta said that while there were times that the offseason was "tough," gaining traction toward a deal, he maintained "tremendous confidence and faith" in his talent and ability that the right move would inevitably occur.

"I knew regardless of how long it would take, I was going to sign with an organization. Fortunate enough, it's an organization like the Phillies who do have that commitment to winning, taking that next step to putting a championship ballclub on the field," Arrieta said. "Unfortunately, there's an uncompetitive nature among several of the teams in this league, and the Phillies aren't one of them. That's a tremendous honor to be able to say that and to sit here and put this jersey on today."

"At the end of the day, you have to understand it is a business. As hard as that can be to swallow, it's a necessary part of this game. Am I upset or frustrated? Absolutely not. Did it take a little bit longer than I would have liked? Maybe. But, we're here now. I basically just put my head down and went to work. Each and every day in the offseason, as I would in spring training and try to approach it just as I would if I was here in camp with the team already.

I don't think I would change it for anything in the world. I think it's hardened me as a person and as a player. It's made me probably a better husband, a better father. It's just part of life. You can't write the script yourself. You have to see how it unfolds and just take it day by day. That's what we did. ...

If you were to ask me where I expected to be at the start of the offseason, it wouldn't be signing on March 12. But it's exciting as hell to be here now, I'll tell you that."

With this delay in signing, obviously translates that Arrieta is a month behind the spring training workload that a pitcher would normally accrue when reporting in mid-February. Still, Arrieta said his body is in "tremendous shape," throwing "50-to-65-pitch bullpens every two or three days."

Arrieta said he intends to be ready by the opening week of the season.

"My arm strength is there. The workload is there," Arrieta said. "I feel like we'll probably sit down, gameplan and decide how quickly I get into a game, how many pitches I'm able to throw right away and to develop a program to get me ready for the opening week of the season. That's exactly what I intend to do. ... Obviously I haven't been in a game yet, but I'm a quick learner and I like my chances to be ready."

When asked about his fastball velocity, declining from an average of 94.6 miles per hour, to 93.7, to 92.1 over the last three seasons, Arrieta responded that "you get to a point in your career where you understand pitching isn't all about velocity."

"I can't tell you how many times you'll see guys with high velocity that can't have success at this level. There's a tremendous amount of learning that has to be incorporated into a starting pitcher's repertoire rather than just going out there and trying to blow guys away with just sheer stuff and velocity," Arrieta said. "That's an experience I had last year and was able to learn from my first half inconsistencies and turn that around and put up a low-two [ERA] in the second half."

Arrieta cited the polarity of his first and second-half performances last season with the Cubs. Through his first 16 starts, the right-hander went 7-6 with a 4.67 ERA. Over his last 14 outings, however, Arrieta posted a much-better 7-4 record and 2.26 ERA.

The Farmington, Missouri native added that going into his first season with the Phillies, his lowering of velocity isn't "a huge concern," but rather an "opportunity to learn more about yourself and utilize another variable in your game."

"High velocity or not, I know exactly what I'm doing on the mound and I know how to utilize my stuff to the best of my ability. Does that mean that the velocity won't be up higher this year? No. I think baseball has shown that sometimes you have a dip in velocity one year, a spike the next year.

"If that velocity does go back to 95-96, then the league's in a lot of trouble. ... Obviously velocity is sexy in this game, but there's a lot of great pitchers out there that can pitch without it."

Klentak said that while he and his scouts studied Arrieta's velocity "a lot" and "looked into it," he went on to say the other attributes he immediately adds to the club far exceed that slight shortcoming.

"Jake's competitiveness and the way he competes, his work ethic and what he brings ... he's a winner. There are a lot of factors in this beyond just velocity or beyond what may have happened in the first half last year," Klentak said. "As Jake said, his second half was much more like Jake Arrieta the last few years. We spent a lot of time looking into that, ... but obviously we were not only comfortable, but thrilled with this outcome."

Klentak began the press conference, similar to Arrieta, by thanking Phillies ownership led by Middleton. "This type of day is not possible without committed ownership," he said. "We talk all the time about our owners and their unwavering commitment to us, that money is no object. I think today is an incredible example of that."

"I want to thank Jake for choosing us," Klentak said. "Andy MacPhail has told me for years, anytime you're in a negotiation, you have to remember that as much as you may be choosing to target a player or somebody to come join you, that person is also choosing you."

Kapler called the signing "the perfect marriage" for Arrieta and the rest of the Phillies players.

"Just listening to Jake talk through how to create confidence, that alone is the perfect message for not just our pitchers, but for [all of our players]." Kapler said.

"This is going to be a perfect marriage, what our players need from Jake, and what Jake can bring to our clubhouse."