Eagles Flyers Phillies Sixers Union About Us Write For Us
Phillies shortstop J.P. Crawford says club will 'shock a lot of people' in 2018
Sixers' passing is what will separate them from the pack going forward

Middleton: Kapler is right,"no reason" we shouldn't be in playoff hunt 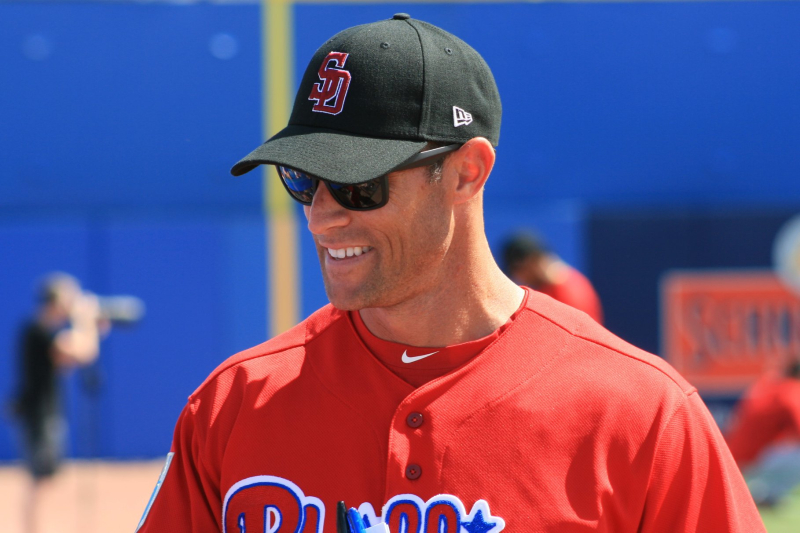 Philadelphia Phillies manager Gabe Kapler is in the midst of his first Spring Training at the helm. (Frank Klose/SportsTalkPhilly)

Just over a decade later, a similar dynamic has presented itself.

New Phillies manager Gabe Kapler spoke last month about how he believes his approach will help the Phillies win "a sh*tload" of games. Kapler opened Spring Training by saying that he believes that if a bulk of the players on the Phillies roster take a step forward in 2018, the team has a chance to "shock people." Does Phillies managing partner John Middleton like Kapler's confidence? He sure does.

"I think he may have the most positive energy of any human being that I've ever met, Jim," Middleton told Jim Salisbury of NBC Sports Philadelphia. "Gabe has been even better than I hoped he would be when we hired him. Beyond his energy, his standards, he said - and he's right in this - 'there's no reason why we shouldn't be in the playoff hunt this year.' Now we all recognize that for that to happen, people have to take a step forward. Even established players who are good players - Aaron [Nola] and Odubel [Herrera] and Cesar [Hernandez] - they have room to improve."

Middleton elaborated further on how he believes someone like Nola, who was one of the league's best pitchers during the front-half of last summer, can take a step forward by pitching at that level for a full season. Middleton likes that Kapler is pushing players, even ones who have already had success, to reach higher.

"I like the fact that Gabe is out there talking about that [competing for the playoffs] as something that is reasonable and realistic." Middleton said of the Phillies first-year manager. "He's challenging players in a positive way to be the best they can and therefore make the team - by all of these 25 players getting a little bit better - a lot better."

Kapler's confidence appears to be contagious, as it has started a domino effect of players saying that they believe that the Phillies are ready to compete in 2018.

Pat Neshek, who rejoined the Phillies on a two-year free-agent contract in December, compared the 2018 Phillies to the 2015 Houston Astros team that he was on, one that won 86 games and the second American League Wild Card.

"Last year was kind of messy, but I feel like we're way ahead of where Houston was [in 2015]," Neshek told MLB.com's Anthony Castrovince earlier this month. "I know they have the money to add if we start winning. And the National League East isn't that great this year."

Charlie Manuel: Scott Kingery Has 'A Little Chase Utley In Him'

Nola, who will be the team's Opening Day starter, said earlier this week that he believes that the Phillies are past their rebuilding stage.

"Everybody still thinks we're in the rebuilding stage," Nola told the Associated Press. "I don't think any of us think that. I think we're going to compete this year and we're definitely going to be better than last year."

Nola was joined in his sentiments by J.P. Crawford, the Phillies long-time No. 1 prospect, who will be the team's starting shortstop in 2018.

"We're going to prove to the whole nation that the Phillies are ready. The rebuilding process is here, and we're going to shock a lot of people," Crawford said on the SportsRadio 94 WIP Morning Show. "We want to win. We hate losing. We've been winning since the minor leagues ... [and] we're going to carry that tradition here."

Whether the 2018 Phillies sneak into the playoffs like the 2007 Phillies did remains to be seen. What is clear is that Kapler, rather quickly, has helped to change the culture in the Phillies clubhouse. And that's caught the eye not only of some of the team's key players, but also the most powerful person in the organization - Middleton.