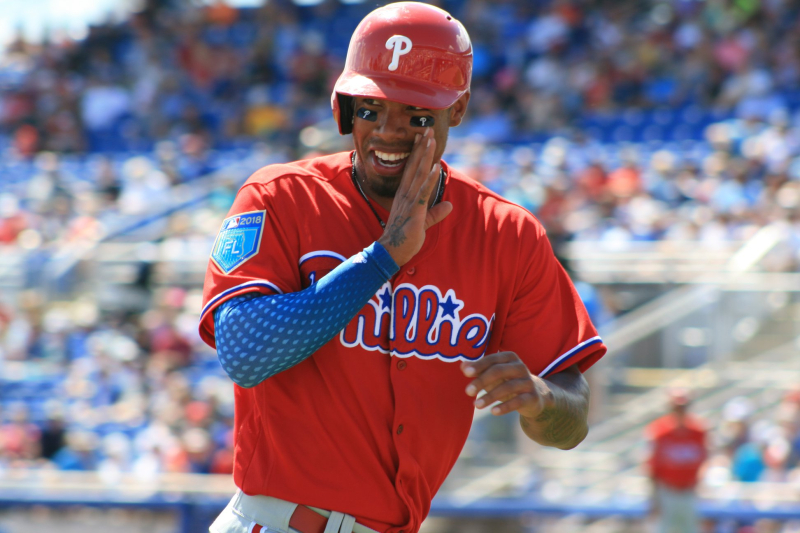 In 16 days, the Philadelphia Phillies will travel to Atlanta to face Freddie Freeman and the Atlanta Braves. Here's a look at what Gabe Kapler's first regular season lineup could look like.

Carlos Santana has the career leadoff splits of .252/.371/.470, with 23 home runs, 69 RBIs and 91 walks. Kapler has hit him in the leadoff spot at times this spring, and probably will during the season. But Hernandez had the highest full-season 2017 on-base percentage (.373) of any player on the Phillies roster.  He also has a career average of .288 hitting out of the leadoff spot.

One thing that could make Hernandez an even more dangerous leadoff hitter is his untapped potential as a basestealer. Though Hernandez has elite speed, he often got himself in trouble on the basepaths during the 2016 season, as he only converted on 57 percent of his 30 stolen base attempts. In 2017, he became less of a liability on the basepaths, as he converted on 15 of 20 basestealing attempts. Still, it felt like he was being too cautious when you consider that he was probably the fastest player on the major league roster. It will be interesting to see if a new coaching staff is able to tap into that potential.

Santana does a little bit of everything at the plate, which makes him a valuable tool for Kapler to maneuver with in the lineup. He could, as mentioned above, hit leadoff. Realistically, he probably could (and probably will) hit in all four of the top spots in the lineup during the 2018 season. The soon-to-be 32-year-old walked 88 times in 2017, which was actually a decline from what he had done over the previous two years. But it still trounces Hernandez, who has led the Phillies in walks three consecutive seasons, and likely will in 2018, as he's projected to walk 90 times in 2018. When you couple that with his pop, a one-two punch of Hernandez and Santana will set the heart-of-the-order up very well: often the first two hitters in the lineup will get on base, unless Santana has already brought Hernandez home and is standing on second base himself.

In my initial Opening Day lineup projection, Hoskins hit in the No. 2 hole, something he told SportsTalkPhilly.com this offseason that he would be fine with doing. It wouldn't be surprising at all if Hoskins ends up hitting there for a bulk of his at-bats in the 2018 season. Things, as he himself said, are likely to fluctuate under Kapler. But the idea of Hoskins regularly coming to the plate with two runners already on base in front of him doesn't sound like a bad one either.

On Opening Day, the Phillies will take on the Braves, who are likely to send Julio Teheran to the mound. For the growing number of people that feel that Aaron Altherr could have a breakout season if given the bulk of the starts in right field, I'm concerned about his ability to stay healthy, but I don't disagree with you. This offseason, I even penned a piece suggesting that I'm not sure the Phillies are as high on Williams as some fans are. To remain in the No. 5 spot in the lineup, Franco will not only have to greatly outperform his 2017 numbers. Even his ZIPS projection for 2018 – .266/.317/.464 with 25 home runs and 96 RBIs – would only be a slight improvement over his 2016 season, which former manager Pete Mackanin suggested was disappointing. Heck, even if Franco does break out, he's likely going to lose at-bats when Scott Kingery is called up, because Hernandez is likely to still be producing at a high clip.

The truth is, Franco is one of the hardest players in the MLB to predict heading into 2018. On one hand, it may be a mistake to continue to read into the 80-game stint that he had in 2015, when he slashed .280/.343/.497 with 14 home runs, 50 RBIs, a 1.5 fWAR and 129 wRC+. Over the past two seasons, while he's flashed moments of brilliance, Franco has more often been a player that puts the ball on the ground too frequently to be successful. On the other hand, he's still only 25, and adjustments to your approach at the plate aren't easy to make. With his third hitting coach in as many years, perhaps Franco, with a more closed stance and emphasis on putting the ball in the air, will finally break out in 2018.

Of course, the possibility also exists that Franco bounces back from a disastrous 2017 season in which he posted a -22.4 oWAR, but also doesn't have a breakout season.  A season where Franco occasionally looks on the cusp of putting things all together, but performs like the 2016 version of himself a majority of the time, is perhaps the most likely scenario from here.

All of that is a long way of saying it's virtually impossible to effectively place Franco in a lineup. Based off of his past production, he's probably a better fit to hit sixth of seventh. But if he continues to produce at the clip that he has for all of his major league experience excluding 2015, there's a very good chance he's not in the lineup frequently once Kingery is ultimately called up. If he breaks out, he could end up being the team's cleanup hitter. Good luck guessing what the Phillies get from Franco in 2018.

In my initial Opening Day lineup projection, I had Herrera hitting in the cleanup spot. I got some pushback for that, but if you consider that Hoskins and Santana may very well hit higher in the lineup than the cleanup spot, it's not that crazy of an idea. With the exception of Altherr and Williams, Herrera's .452 slugging percentage was the highest of any player that spent the bulk of the 2017 season with the Phillies. Altherr and Williams will be competing for at-bats in right field in 2018, and as mentioned above, it's anyone's guess what the Phillies will get from Franco.

So while I stand by the idea that Herrera, who doubled 42 times in 2017, will hit in the cleanup spot at some point during the 2018 season, I'm not sure it will happen on Opening Day. If Aaron Altherr starts on Opening Day, my guess would be that he'll hit cleanup. In that scenario, Herrera likely would be Kapler's No. 5 hitter, breaking up Altherr and Franco. However, with Williams in the lineup, Franco would break up the two lefties.

Of anyone likely to start in over 150 games for the Phillies in 2018, Herrera's spot in the lineup may fluctuate the most. If he struggles like he did last May – when he hit .183 with 30 strikeouts, he'll likely slide down or altogether out of the lineup. If he catches fire like he did in the second half of the 2017 season – when he slashed .323/.378/.551 – chances are he'll be hitting in one of the top four spots in the lineup. On Opening Day, he'll likely hit in the fifth or sixth spot.

Much has been made of the impact that Santana's presence will have on Franco, but the Phillies probably hope that Santana's approach rubs off on Alfaro. Not only is Santana a former catcher, but he's 16th among active players in career walks. Alfaro, in 431 at-bats between Triple-A and the majors in 2017, walked just 19 times. That obviously has to change, especially since Alfaro doesn't project to be a player that hits for an especially high average.

Baseball Musings has a tool that allows you to build the best lineup possible. You simply punch in a player's OBA and slugging percentage and it builds you the 30 most effective lineup combinations. I used the tool to build 60 potential lineups for the Phillies. The first 30 – which are based off of each player's 2017 production at the major league level – all have Nola hitting eighth: It's worth noting that Williams, Alfaro, Crawford and Hoskins didn't spend the full 2017 season at the major league level. So the second 30 lineup combinations are based off of Steamer's 2018 projections. Nola, again, hits eighth in every possible lineup combination: It's possible that on Opening Day, Kapler goes with a tamer lineup and eases in some of the less traditional looks throughout the season. But the Phillies didn't build a sabmermetrics-heavy organization, one that now has a coaching staff to match it's front-office, to look the other way on data like this. Don't be surprised if Nola hits eighth on Opening Day. The pitcher hitting in the eight hole will certainly happen throughout the course of the 2018 season.

Not only do the Phillies have a manager that's going to be willing to experiment with the idea of hitting the pitcher eighth, but they have an ideal position player to hit in the nine hole in Crawford. Tony La Russa would often hit his pitcher in the No. 8 hole, because he "wanted to get his best hitter more at-bats." Joe Maddon, who Kapler has spoken highly of, does the same thing. Crawford may not hit at an especially high clip, but he's still going to get on base because he walks a ton.

Kapler explained to MLB.com's Todd Zolecki this past weekend what was behind a decision to hit Crawford ninth in the lineup:

"We want more runners on base at the top of the lineup," Kapler said. "We're utilizing J.P.'s superior on-base skills. That's the intent there. It's possible that we use a similar kind of lineup during the season. We don't want to do anything for the first time in the season that we didn't do in practice here."

It's hard to read too much into the 23-game stint Crawford had at the major leagues in September. Clearly, Crawford is going to have to hit better than .214, which was the average that he posted in his first 70 major league at-bats. He did post an incredible 18.4 percent walk percentage in his first 70 at-bats, which is one of the reasons that the Phillies like him so much. He's not going to continue to walk at that rate, but ZIPS projects that he'll walk 76 times this year, which would be way more than any player on the team did in 2017.

Percentage of hard contact by year against Jake Arrieta, per @fangraphs:

This is a BAD trend.

Here's Jake Arrieta at the 2008 Futures Game, with Jason Donald, who, coincidentally, the Phillies ultimately traded for another ace – Cliff Lee.

Hitting Coach Matt Stairs getting us started at #PadresST today.

One swing is all he needed. 💪 pic.twitter.com/PgUIEeumeF