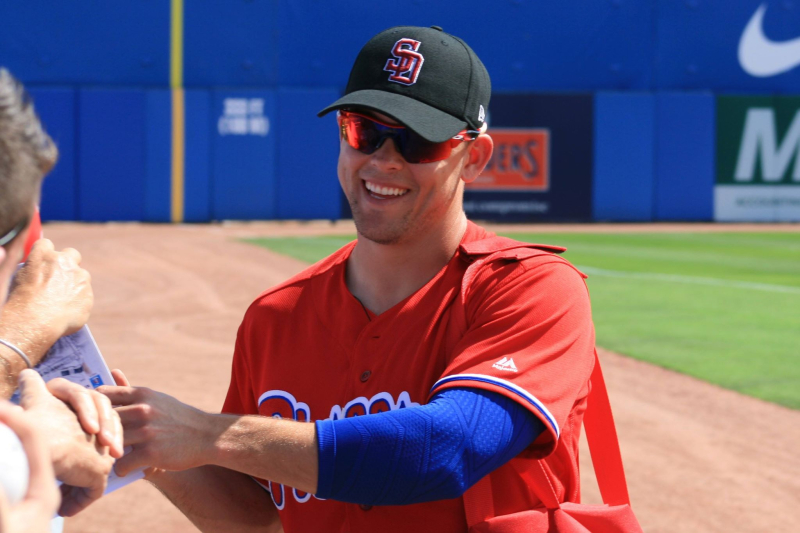 Scott Kingery signs autographs for fans prior to a Spring Training game against the Toronto Blue Jays. (Frank Klose/SportsTalkPhilly)

The Philadelphia Phillies spent a combined $135 million on Jake Arrieta and Carlos Santana this offseason. They are expected by many around the league to offer a record-setting contract to either Bryce Harper or Manny Machado next offseason. And yet, they don't figure to be financially strapped anytime soon, in part because the two internal players that general manager Matt Klentak has locked up - Odubel Herrera and Scott Kingery - have been signed to extremely team-friendly contracts.

Not only do these two extensions show tremendous foresight, but with them, the Phillies organization seems to have learned from past missteps.

It's one thing to simply buy out a player's team control and arbitration years, hoping that more money up front will entice them to waive their chance to make more annually in their final arbitration years. Even in the case of someone like Ryan Howard, who won National League Rookie of the Year in 2005 and National League MVP in 2006, his second season, the Phillies may have saved money by locking Howard up for at least his arbitration years early on in his career.

In 2008, Howard made $10 million after defeating the Phillies in arbitration. It's hard to believe now, but at the time, $10 million was the most that a player was ever awarded in arbitration. After the Phillies won the World Series in 2008, the club rewarded Howard with a three-year/$54 million deal, buying him out of his final three years of arbitration and making him one of the game's highest paid players.

Would it have been cheap to lock Howard up earlier in his career? Probably not. Would it have been cheaper than allowing the arbitration process to play out? Most likely. Would the front-office tandem of Pat Gillick and Ruben Amaro Jr. have jumped at the opportunity to buy Howard out of his first few free-agent years, perhaps preventing them from signing Howard to his now infamous five-year/$125 million deal? You bet.

Phillies Nuggets: Just Like That, Matt Klentak Won The Offseason

Factoring in that players tend to become more expensive as they have more individual and team success - along with the basic economic principle of inflation - the current Phillies front-office seems eager to sign potential core players earlier in their career.

On Dec. 15 2016, Klentak and the Phillies signed Herrera to a five-year/$30.5 million extension. Herrera, who had been an All-Star in 2016, waived his first free-agent year by agreeing to a deal that will instead pay him $10 million in 2021, his age-29 season. On top of that, the Phillies carry affordable club options for 2022 and 2023, ones that they are nearly sure to exercise.

Herrera, of course, hadn't been without his flaws during his first two seasons with the Phillies. Heck, 10 days before the Phillies signed Herrera to his extension, a report surfaced saying that they may be willing to trade him. But ultimately, Klentak decided that for the time being, Herrera would provide the most value to the Phillies by playing for them. So he signed the Venezuelan-born outfielder to a team-friendly contract that allowed the Phillies to control Herrera through his age-31 season, should they choose to.

If Herrera becomes a part of the next great Phillies team, he'll do so while playing at a lower rate than he would have received in arbitration, and eventually, free-agency. However, by signing Herrera to this team-friendly extension, Klentak made him more valuable as a trade piece if the Phillies ever consider moving him again.

The Phillies have an excess of outfielding talent at the major league level now, have spent three consecutive first-round picks on outfielders and are widely expected to be major players in next offseason's free-agent class, which could feature various All-Star outfielders. There's a distinct possibility that the Phillies eventually decide to trade Herrera. While it may be unreasonable to expect a team to give up the type of return that the Washington Nationals gave the Chicago White Sox for Adam Eaton prior to the 2017 season, Herrera is a much more intriguing trade candidate under his current contract than he would have been if the Phillies had gone year-to-year through the arbitration process with him.

As it turns out, Herrera's deal was just the tip of the iceberg.

Sunday, the Phillies agreed to a six-year/$24 million contract with Scott Kingery, who MLB Pipeline says is the best second base prospect in baseball. Not only did the Phillies buy out all six years of their team control over Kingery, but his new deal contains club options for 2024, 2025 and 2026, the first three years Kingery would have been eligible to be a free-agent during. His extension is viewed as so team-friendly that one anonymous agent told Ken Rosenthal of The Athletic that the three option years at the end of Kingery's new deal are "offensive."

Consider this: From 2009-2011, the Phillies paid Chase Utley $41 million total. From 2024 to 2026, with over decade of inflation, the Phillies could pay Kingery a total of $42 million. Utley's biggest contract of his career was a seven-year/$85 million extension that the Phillies signed him to prior to the 2007 season, his fifth in the league. Kingery could be a perennial All-Star and still not be as good as Utley, but when you factor in over a decade of inflation, if the Phillies had waited until after Kingery's fourth season to sign him to a major deal, it would have cost significantly more than $85 million. (This, of course, presumes Kingery is as good as scouts and the Phillies expect him to be.)

Additionally, while it's not a discussion that anyone wants to entertain now, if there becomes a point where it makes the most sense for the Phillies to retool, Kingery, like Herrera, will become more valuable on the trade market because he has a team-friendly contract.

Some felt the Phillies were backed into a corner with Howard. Between 2006 and 2011, Howard hit 262 home runs and drove in 796 runs. He was scheduled to become a free-agent after the 2011 season, when Albert Pujols, Price Fielder and Adrian Gonzalez also were eligible to become free-agents. The Phillies were at the back-half of the greatest run in franchise history, but it wasn't outlandish to think in 2009 or 2010 that the core of Howard, Utley, Jimmy Rollins and Cole Hamels could help the Phillies remain competitive through 2012 or 2013.

Trending: With Excess of Talent, Phillies May Not Ride Out Herrera's Struggles in 2018

So the Phillies, under the belief that they couldn't afford to let Howard test the open market after 2011, preemptively signed Howard to a five-year/$125 million contract extension in April of 2010. As it turned out, the Phillies would have been better allowing Howard to reach free-agency. While he still was productive in 2010 and 2011, he wasn't $25 million a year productive, and began to show signs of wear and tear. It's unfair to blame the Phillies for the torn Achilles that Howard suffered in Game 5 of the 2011 NLDS, one that ultimately altered his career, but it is fair to suggest that had they waited until after the 2011 season to attempt to re-sign Howard, they would have gotten him for either a greatly reduced rate or decided to go in another direction.

None of this would have been an issue if the Phillies controlled Howard through his age-33 season, rather than his age 31 season. After 2013, when Howard was 33, it was apparent that it was in the Phillies best interests to rebuild and move on from their 2008 core, perhaps save for Hamels. Those extra two years of control that the Phillies didn't have over Howard, they will have over Kingery.

It's not a stretch to say the Phillies now control Kingery for his entire prime, and they do so at what will turn out to be a criminally-low rate. They control Herrera for much of his peak, and have also set themselves up to fetch a nice return for him should they choose to trade him.

The extensions of Herrera and Kingery show not only tremendous foresight by Matt Klentak and the Phillies front-office, but an ability to learn from past organizational missteps.