Eagles Flyers Phillies Sixers About Us Write For Us
Former Sixer Aaron McKie to replace Fran Dunphy at Temple in 2019
Ben Simmons: "Markelle Fultz is a freak of nature" 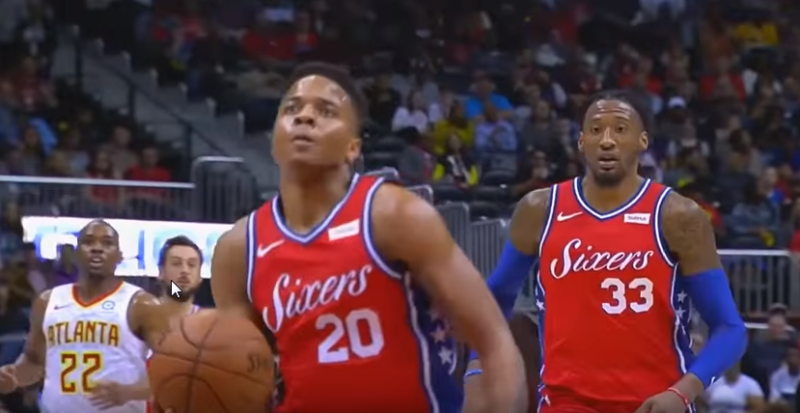 It was a game of if's, and's, and but's, with Joel Embiid officially out with a devastating injury to the orbital bone in his eye. The Sixers had to rely on a plethora of other players to fulfill the needs of the team and keep the boat afloat.

Ben Simmons kept his insane rookie of the season going with yet another triple-double, his 11th of the year, after posting 13 points, 12 rebounds, and 11 assists in 27 minutes. He was 6-of-11 from the floor.

Scoring wise, the Sixers didn't have one dominant player out of the starting lineup. No one really overcame themselves and took over the game like Joel Embiid would on any given night.

JJ Redick led the starters with 19 points, shooting 8-of-14 overall from the field, 1-of-3 from beyond the arc. Robert Covington had 10 points, but struggled from deep, going 2-of-9.

Dario Saric had perhaps his worst performance of the season, finishing with just six points on 2-of-10 shooting. He added four rebounds, three assists, and two steals, but had a team-high five turnovers.

If you take a look at the statline, the number out of the starting-5 points wise is a big fat "0." That would be Amir Johnson, who got Embiid's minutes at center on Friday. But if you look a little closer, Johnson also had 11 rebounds, three assists, a steal, and a block, and finished a +20 on the court, the second-most +/- of the night for the Sixers.

Markelle Fultz had a career-high 10 points on 4-of-8 shooting, seeing the bulk of his 19 minutes coming towards the end during garbage-time with the Sixers up big. Hopefully, we'll see more positive nights for Fultz for the rest of the season, improving his game before the playoffs.

Even though Ben Simmons gathered his 11th triple-double of the season as a rookie, my game ball MVP of the night is former Hawk Ersan Ilyasova, who absolutely shredded his old squad on their own court.

Ilyasova finished with 21 points and 16 rebounds in 30 minutes. He shot 50 percent from the field, and contributed key minutes for the Sixers off the bench, especially in the third quarter, where the Sixers outscored Atlanta 39-18.

The Sixers had the lead up in the 30's for most of the game, but saw that lead dwindle quite a bit in the fourth quarter once Head Coach Brett Brown pulled the starters for the bench players.

The Sixers were 42-of-95 (44.2 percent) from the field, but were an abysmal 8-of-38 (21.1%) from 3-point land. Brown had said before the game that the focus without Embiid would be their pace of play and their 3-point shooting. Overcoming the 21-55 Hawks while shooting that poorly from long range is one thing, but doing that against much better teams is something completely different.

Adjustments will need to be made going into their next game this year.

The Hawks' leading scorer of the night was Damion Lee with 20 points on 8-of-17 shooting. Former Sixer Dewayne Dedmon had 11 points and 15 rebounds. Miles Plumlee had seven points and 12 rebounds off the bench.

Atlanta was also atrocious from beyond, shooting 9-of-39, just a tiny bit better than the Sixers' performance.

But at the end of the night, the superior team won, and the Sixers keep their winning ways going. Next up is the Hornets in Charlotte on Easter Sunday, tip-off set for 1 p.m.