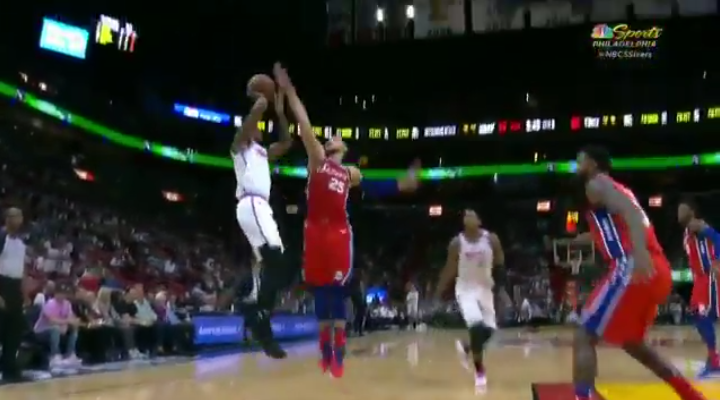 Poor shooting from Robert Covington and Joel Embiid along with a combined 17 points in the fourth quarter from Dwayne Wade and Philadelphia native Wayne Ellington doomed the Sixers in a 108-99 loss at American Airlines Arena on Thursday night.

The Sixers won the opening tip and Ben Simmons took the ball and ran virtually untouched straight to the rim for a big slam to start the game. Unfortunately, Miami would take control from there with a seven unanswered points to put the Sixers in an early hole.

Hassan Whiteside led the charge for Miami going a perfect 4-for-4 in the first quarter and scoring nine points as Miami stretched their early lead to as many as seven points.

The Sixers doomed themselves early with turnovers, which Miami scored seven of their first 18 points in the game off of.

The Sixers would settle down and claw their way back from the early deficit thanks largely to good passing and the play of Dario Saric.

The Sixers had 10 assists in the first quarter compared to six for Miami, and Saric matched Whiteside with nine points of his own on the strength of five attempts from the free throw line.

The Sixers would only trail by one as Miami led 29-28 after the first quarter.

Miami regained their momentum in the second quarter and pushed their lead up to 10 points after back-to-back buckets by all-star point guard Goran Dragic.

Miami led ballooned to 12 points before the Sixers started to make a push back towards the end of the second quarter.

The Sixers used a 12-2 run anchored by the three-point shooting of J.J. Redick – who missed the game winner in the Sixers last trip to Miami – to shrink the Miami lead to four heading into the break. Redick went three-for-three from beyond on the run, and even assisted on a fourth three from Ersan Ilyasova after Ben Simmons dove on a loose ball and threw it down the court to Redick before he found Ilyasova.

Redick led the Sixers with 11 points at halftime. Ben Simmons filled up the stat sheet in the first half with eight points, five assists, five rebounds, and three steals.

Hassan Whiteside paced the Heat with 11 points of his own.

The Sixers got two quick threes from Saric and Redick to start the third and closed the Miami's lead early in the third quarter.

After Joel Embiid missed a shot under the bucket where he though he was fouled Embiid and Hassan Whiteside came together and after some less-than-friendly contact  the two big men both drew fouls.

Embiid was assessed his fourth personal foul, sending him to the bench early in the second half. Whiteside received a technical foul and after J.J. Redick hit the ensuing free throw the Sixers took their first lead since they held a 20-19 edge in the first quarter.

The Sixers never led by more than two points in the game until Marco Belinelli drilled a three to give the Sixers a five point advantage half way through the third quarter. The Sixers only enjoyed the breathing room for a moment as Tyler Johnson answered with a three of his own on the next possession.

Belinelli hit another three moments later to give him his eighth double-digit scoring effort in 10 games as a Sixer.

The Sixers led 70-67 with just over two minutes to go in the third quarter, but four straight points from Miami gave them a late 71-70 lead.

T.J. McConnell would pick up his first points of the night on the next possession when he drove past Dwayne Wade and deposited a lay up to give the lead back to the Sixers.

Wade would tie the game at 72 after going one-of-two at the line, and McConnell would answer again by hitting an elbow jumper to make it a 74-72 Sixers lead.

Wade was the player that doomed the Sixers in their last trip to Miami, and he nearly got his magic to work again late in the third. With time expiring Wade tried to beat the buzzer and got the ball to fall through the hoop, but fortunately for the Sixers the ball did not leave Wade's hand prior to the buzzer, and the Sixers took a 74-73 lead into the final frame.

Episcopal Academy graduate Wayne Ellington scored the first points of the fourth quarter for Miami to give them the lead once again.

The Heat would maintain the lead and moments after Joel Embiid exited the game with his fifth foul Ellington would strike again with another three to stretch the Miami lead to eight points.

Miami increased the lead to 10 before Dario Saric hit a corner three out of a broken play to inch the Sixers closer.

Ellington hit his third three of the quarter with over three minutes to play in the game to extend the Miami lead to 12 as the Sixers began to run out of time to make the comeback.

With time running out the Sixers dug deep and trimmed the Miami lead to five with 1:24  after scoring six straight points in 30 seconds.

The Sixers then put Hassan Whiteside to the line, who shot 69% from the stripe entering the game and was five-of-eight on his previous free throws in the game. Whiteside shook off his previous misses and hit both.

On the next possession the Sixers turned the ball over and Josh Richardson found Dwayne Wade for an alley-oop and two of his eight fourth quarter points, putting the final nail in the coffin.

Hassan Whiteside led all scorers with 26 points to go with eight rebounds, two assists, and two blocks. Dwayne Wade scored eight of his 16 points in the fourth quarter. Josh Richardson scored 13 points and Tyler Johnson scored 12 while Kelly Olynyk was the final Miami player in double figures with 10 off of the bench.

Dario Saric led the Sixers with 20 points and added 10 rebounds to earn his ninth double-double of the season. J.J. Redick scored 18 points, and only four in the second half. Marco Belinelli poured in 14 off of the bench and Ben Simmons scored 10 points with eight rebounds, eight assists, three steals, and two blocks.

Joel Embiid scored 17 points but did so by shooting five-of-18 from the field. Robert Covington missed all 10 shots he took and the two combined for 23 missed field goals.

The Sixers play next on Sunday when they visit the Brooklyn Nets.