Sixers try to regroup in rematch with Hornets 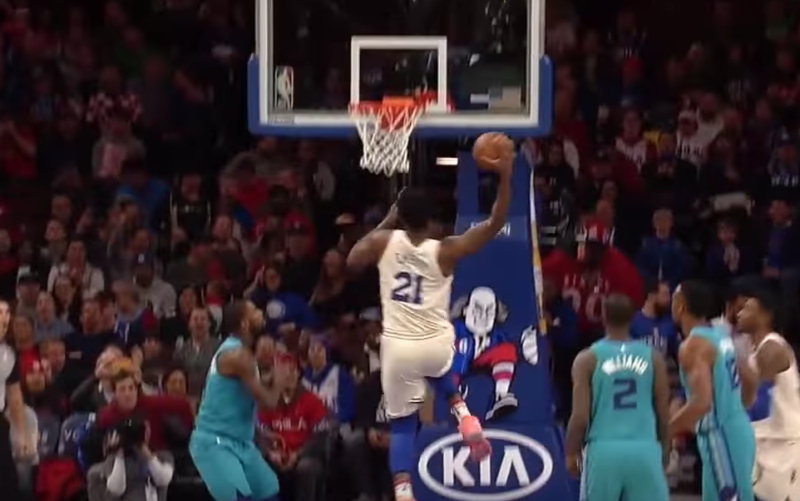 The Philadelphia 76ers (34-28) have themselves a battle on Tuesday night with the Charlotte Hornets (28-36), and it's all about playoff positioning at this point for the Sixers.

With only 20 games left in the regular season, the Sixers are now finding themselves in the harder part of their schedule among the "easier-to-beat" Eastern Conference teams.

The Hornets aren't a team that really should be feared right about now, especially as their playoff chances are slowly dwindling in a tightly contested East, with spots 3 through 8 completely up for grabs.

The good news for the Sixers is that it'll be extremely hard for them to fall out of the playoff hunt, especially with the Pistons (9th) and the Hornets (10th) losing games, thus losing ground amongst the conference leaders.

The Hornets are currently six games behind the Bucks, who are currently the eighth seed. The Knicks are the 11th seed, but four games separate them and Charlotte.

Unless something crazy occurs in the next 20 games, the top eight right now look like the ones that will be playing come playoff time, however, the order is extremely static.

The Sixers last played the Hornets on Friday, coming away with a 110-99 home win. The highlight of the game had to be how bad Joel Embiid dominated his matchup with Dwight Howard. It was pretty much a no contest. Embiid outscored Howard 23-6 and outrebounded him an astounding 15 to 6.

Howard was ineffective due in part to getting into early foul trouble against Embiid, something Jo-Jo does exceptionally well against opposing big men.

Three early fouls in the first quarter was the tell-tale sign that it wasn't Howard's night and that he was messing with the wrong center.

Sixers ready to put Bucks' loss behind them, and you should too

The Sixers lost on Sunday in Milwaukee in one of the worst fashions you could possibly dream of. The Sixers blew two separate 19+ point leads, including giving up 21 unanswered points late in the third quarter that culminated in a 23-5 run for the Bucks.

However, the Sixers have won nine of their last 11 games, so this loss served as somewhat as an outlier for how good they have been in the last month or so.

The Sixers/Bucks game was Philly's third in four days, and it was obvious that player fatigue played a major part in the team's downfall.

If you really look at the Sixers' season right now, they are playing much better than expected at this point in the year. They're six games over .500 and are looking to capture a playoff berth. Only a couple games separate the 76ers and the Cavaliers for the third seed in the Eastern Conference, something you would never have predicted in October.

Sports Talk Philly's Brandon Apter constructed a 2,000 word masterpiece on how we as a Sixers fanbase need to pump the brakes, relax, and trust that Brett Brown knows what he's doing. He's gotten them this far, and it would be wrong to crucify him after one bad loss.

The Sixers' loss to the Bucks on Sunday night marked the 82nd game of center Joel Embiid's young career.

Basically put, Embiid has officially played an NBA season's worth of basketball games.

Tuesday night's game in Charlotte will be Embiid's 83rd, but his stats over the 82 game stretch are pretty unbelievable. He has averaged 22.4 points, 9.9 rebounds, and two blocks, with the Sixers carrying a record of 44-38, which by the way, would make the Sixers a playoff team.

On the recent Pick Swap Pod (listen below), myself, Apter, and Jesse Larch reflected on Embiid's 82 career games and picked out our favorite on-court and off-court moments of "The Process'" career.

What are your favorite Biid moments?

The Tale about Turnovers

The Sixers are the NBA's leader in one of the worst stats to be affiliated with, turnovers. The Boys in Blue average 17.3 turnovers per game, and their season-high 26 on Sunday didn't really assist with the matter.

Joel Embiid had seven turnovers for the Sixers, that translated into 36 points for Milwaukee.

Meanwhile, the Hornets average 12.6 turnovers per game, the third-lowest average in the NBA.

If the Hornets plan on snagging a home victory from the 76ers on Tuesday night, they should rely on their elite-level ball handling, and focus on defending the Sixers to a point where they force turnovers on the other end and capitalize on them on the other end.