Eagles Flyers Phillies Sixers Union About Us Write For Us
Zach Eflin to start for Phillies on Tuesday
Inspired by the 1980's, Sixers to wear red in Boston this series 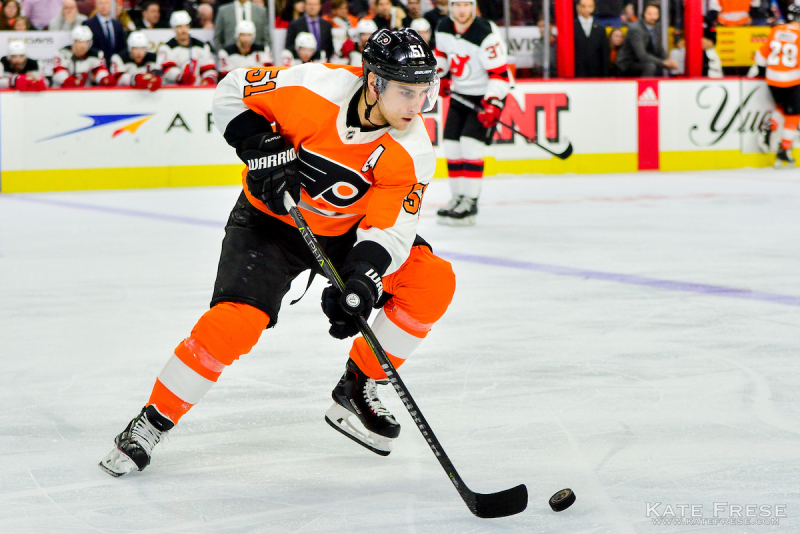 "My conversations with most of those guys were the plan right now is not to bring you back," Hextall said of the four restricted free agents. "Things can change because we don’t know what happens over the summer. Filppula is one guy where we have interest and we’re going to see what happens here. The other guys, unless something changes, we don’t plan on bringing them back right now."

In other words, the only pending free agent that the Flyers will consider re-signing is Filppula.

Let’s start with one RFA who deserves a contract extension: Hagg.

Hagg had an impressive rookie season and was tied for seventh in the NHL for hits with 238 in 70 games played. It’s safe to say that Hagg, who is only 23 and is a strong two-way 6'2" 204-pound machine on the Flyers blue line, will most likely get a contract extension but for a good low price.

For Mrazek, he appeared in 17 games, starting 15 but owning a record of 6-6-3 with a GAA of 3.22 and a SV% of .891. He started out well for the Orange and Black, going 3-0 in his first three starts, but after that seemed to lose his touch and then lost three games in a row. The Flyers will not re-sign him, and with that being the case, they will keep their third-round pick in the 2019 NHL Draft due to the conditions on the Mrazek trade.

Filppula is a serviceable center, however the Flyers have future players such as Morgan Frost, Mike Vecchione, Danick Martel and German Rubtsov who could end up filling similar roles in the future, as soon as next season. Filppula, who had a $5 million cap hit last season, will perhaps be back with Philadelphia, but the Flyers would prefer to clear additional cap space and allow the roster to get younger in future seasons.

Read will be gone after being with the Flyers organization since his rookie season in 2012. Read is another forward who has done his fair share with helping out, and has certainly looked better since his call-up earlier this season from the Lehigh Valley Phantoms. Although he did only score one goal in 19 games played, his contract, which has a $3.6 million cap hit, is a big reason why his time in Philadelphia is up.

Leier is one of the few who realistically could stay with the team and get a short-term contract such as a two or three-year deal. He had five points in 39 games played this year.

Oduya will be gone as the Flyers will get $1 million back in cap space since he was just a rental player after being claimed off waivers at the deadline. The big question is that if the Flyers were to use him for the playoffs since he is a veteran defenseman who has won multiple cups, then why didn’t they? Oduya played 19 shifts (12:01 TOI), had one shot, and was a minus-1 in his one game with the Flyers against the Florida Panthers on March 4 before being injured.

The remaining contract is that of Manning, who will also be granted free agency. Manning was a relatively solid defenseman for the team, but he is taking away valuable ice time from players such as Travis Sanheim, Sam Morin and Phil Myers.

Whatever happens in free agency with this team and the new cap space they will gain from expiring contracts, Hextall has the freedom to construct a roster and use the cap space as he chooses.

"Ron has the flexibility to do whatever he wants with his cap space and his roster," Paul Holmgren said. "If that’s the decision he wants to make moving forward, he’s got free rein to do that. I think Ron continues to do what’s right for the organization."

Overall, the best thing for the Flyers to do is let some players walk to gain more cap space. Philadelphia will gain a good amount back in cap space. As of right now, Read, Oduya, Manning and Mrazek are all be leaving, so that will save them $7.6 million. If Filppula is also not re-signed, then the Flyers will have $12.6 million in cap space from just the departures alone.

Look out for Part 2 of the Flyers Offseason Preview, which will be the possible lineup for the 2018-19 NHL season.

It's in a way disingenuous to say that losing Oduya, Read, Manning, Mrazek, and Fill would clear $12.6. Read spent the majority of the season in the minors and only came up when Neuvy and Elliot were on IR and their contracts did not count against the cap. Oduya, iirc, spent the end of the season on IR as well.