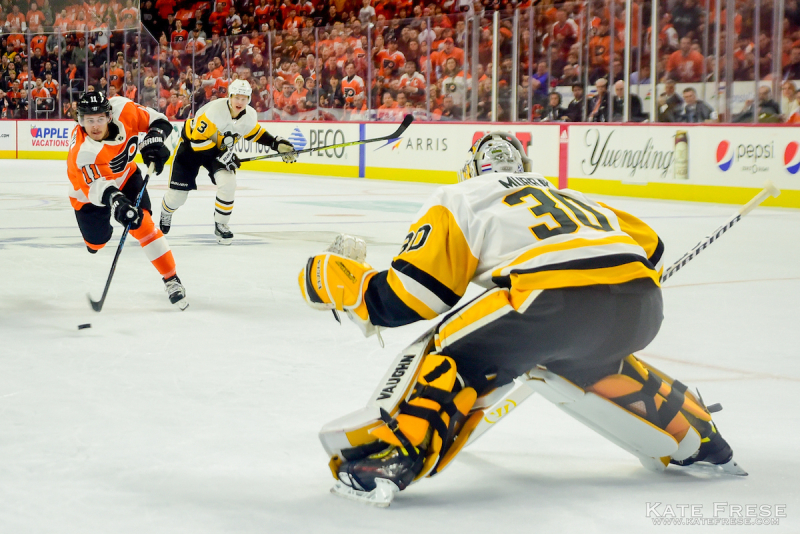 The Penguins streak of scoring five goals in wins over the Flyers continued in Game 4, as the Flyers season officially moved to the brink.

In the biggest game of the season, the Flyers came out flat and lazed their way through the majority of the 5-0 loss to the Penguins.

The end of the season is now in sight and the Flyers possible final act in front of the Wells Fargo Center crowd was another embarrassing showing with no effort.

Another relatively easy night for Matt Murray. It was a 26-save shutout for Murray, but not many of the shots were from quality scoring areas.

The Flyers finished the game with a 50.59 CF% at even strength, but that was only because of a 16-7 shot attempt advantage in the third period. In the first two periods, when the Penguins out-scored the Flyers, 4-0, Pittsburgh also controlled the possession game.

I wish someone would ask Ron Hextall, when he expect the team to get to the next level (meaning they have been a bubble playoff team for his 4 his as GM). I know he can't answer about a specific time he thinks they can win the Cup, but I would love to know when he thinks they can get to that next level?

I ask this because we have essentially wasted the prime years of guys like Giroux, Vorachek and Simmonds. If this team is still 2-3 years away from really competing, then they will all be north of 30 years old and probably on the downside of their career.