Eagles Flyers Phillies Sixers Union About Us Write For Us
Sixers could start second round series on Saturday
Klentak on Kapler's home opener booing: ''I was disappointed for him'' 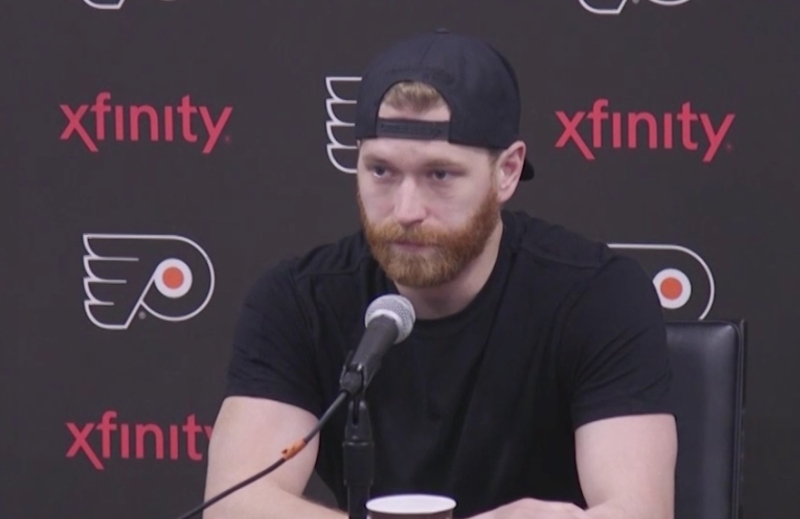 The end of a season in a playoff series loss can be very emotional. We all saw that first-hand in the moments near the end and following the Flyers Game 6 loss to the Penguins on Sunday.

Perhaps the only thing that can compare is the inevitable breakup day that follows. The Flyers held their breakup day on Wednesday with exit interviews with both management and the media for several players.

Here are a few of the noteworthy things to come out of breakup day.

The players were set to meet with GM Ron Hextall by position, with goalies going first, defensemen next and forwards to follow. While the players didn’t meet with the media in the same order -- some did their press conferences before meeting with management -- we’ll separate notes based on position.

The Flyers used three goalies in the playoff series against Pittsburgh, but only Brian Elliott and Michal Neuvirth got starts. Turns out neither was fully healthy from the injuries they sustained.

Elliott was still dealing with issues from having core muscle surgery and may require another one in the offseason. He said it was the toughest issue he’s had to face in his career, but wanted to try to get back for the playoffs. Elliott is going to remain in the area over the summer rehabbing and expects to be fully healthy in time for training camp.

Neuvirth is going to have arthroscopic surgery on both hips. Injuries have plagued Neuvirth for his entire career, something that is not lost on him. He called this one of the most frustrating seasons he has ever had in that regard.

He is also changing trainers this offseason in hopes that a new program will help prevent future injuries. His new trainer, based out of Kelowna, has worked with Devan Dubnyk and Connor Hellebuyck.

Neuvirth expects to be fully healthy in time for camp.

As for Petr Mrazek, acquired by the Flyers out of desperation, the door is not closed on a return, but Mrazek didn’t sound optimistic. He noted that everyone knows the current situation -- that Elliott and Neuvirth are both signed through next season and that he is a pending restricted free agent -- and simply said “we’ll see what happens,” regarding his own future.

Might as well start at the top with this one. Ivan Provorov was the team’s No. 1 defenseman this season and really showed his commitment and leadership down the stretch. In Game 6, he took all of that to another level.

Everyone knew Provorov was ailing after Game 5. Nobody knew it was this bad. Provorov said on Wednesday that he had a Grade 3 AC strain of his shoulder. Normally, it would require 6-to-8 weeks of recovery in the regular season. There were times during the third period of Game 6 where he didn’t have feeling in his arm.

Provorov not only played through the injury in Game 6, but was also very critical of himself following the season-ending loss. He was very emotional during the end of the game and in the locker room afterwards. The reason -- “I hate losing, what can I say?” the 21-year-old said.

Provorov said he felt that overall he got better in his second season and plans to be even better in his third. He also wants to take on more of a leadership role in the locker room.

Shayne Gostisbehere heads into the offseason fully healthy, something he was proud to say. Gostisbehere felt his defensive growth over the regular season surprised people, but was not at all happy with his defensive play in the playoffs. He specifically said that against Sidney Crosby’s line, it was more like weathering the storm.

Gostisbehere added that the clock is ticking for the core group of players and that they need to make a splash in the playoffs.

Radko Gudas didn’t speak to the media after Game 6 on Sunday. He said Wednesday that was because he didn’t want to say something that he would regret, noting he was very disappointed in himself.

The penalty kill was a big issue in the season and into the playoffs, and Gudas said he feels that communication is one of the issues to struggles on the penalty kill.

Brandon Manning is in a contract year and felt he had an up-and-down season. He wants to remain a Flyer, but that decision is in Ron Hextall’s hands. While Manning expressed a desire to remain with the team, there was a sense that he felt he may have played his last game in Philadelphia.

Travis Konecny did not get off to a fast start in the 2017-18 season and admitted that he was worried about a potential sophomore slump. Once he was playing with Claude Giroux and Sean Couturier, he felt he became a more well-rounded player.

Konecny noted his risk-taking to be a playmaker and how he has to pick his spots a little better. He said he needs to make sure that the 200-foot game is always there and used Giroux as an example, saying that if players like Giroux can make the safe play, then everyone can.

Konecny also had a very interesting look at the Penguins series. He said that the Flyers had the Penguins exposed in Games 3 and 6 -- both strong starts for the Orange and Black -- but need to learn to respond better. He added that experience played a factor in the series result.

Nolan Patrick talks like a superstar player would. Even as a 19-year-old rookie, he expressed the confidence he started to show on the ice in his words evaluating his first season.

“When I got confidence, I was a different player,” Patrick said.

Patrick also through the Flyers beat themselves more than anything in the series against Pittsburgh. He called it a disappointing way to lose, but added “we’ll be back there next year.”

Patrick also enters the offseason completely healthy, which allows him to use the offseason to the fullest. He said he only had one month to really prepare for this season and couldn’t even run during the summer after having surgery to repair a sports hernia.

This offseason, he said he wants to get bigger, stronger and work on his shot more.

Sean Couturier once again confirmed the injury he played through in Games 5 and 6 was a torn MCL. He will not require surgery, just rest, which the offseason allows.

The Selke Trophy finalist also noted that he wanted to take a step forward offensively and prove he could produce in the NHL.

“I've scored in juniors. I was drafted as a high pick, offensive guy. I've always been solid defensively. Try to play a solid 200 feet game out there. That doesn't change, but offensively I wanted to step forward and prove to everyone that I can produce in this league.”

If you thought what Couturier and Provorov played through was a lot, wait until you hear the list of injuries Wayne Simmonds played through this season.

Simmonds tore a pelvic muscle in training camp. By the end of October, he had a pulled groin, a broken ankle and had lost several teeth from taking a high stick while on the bench. Later in the season, he tore a ligament in his thumb.

Through all of it, Simmonds missed just seven games.

Despite all of the injuries, Simmonds said he didn’t play up to expectations this season. His contract expires after the 2018-19 season, and while he wants to remain a Flyer for the remainder of his career, he understands the business side and knows that his performance this season may not warrant a contract extension just yet.

“They maybe didn’t see enough to give me an extension right now,” Simmonds said.

Simmonds may have had the quote of the day about playing through pain. Jake Voracek had the quote that will serve as motivation for next season.

Core players especially will look back on a season and where the next one needs to go. Voracek said a year ago that the Flyers needed to start having success or it, meaning the core, was all going to get blown up. For next season, the Flyers have to win beyond the 82-game season.

"We've gotta win at least a playoff series next year, but a lot of bright future, lot of guys that had great years, and hopefully we're not that far off."

Voracek, who set a career high with 85 points, still was not completely satisfied with his season. He did note that he was healthy for the entire season.

Voracek was one of the veterans who did not have a great postseason performance. He had some thoughts on what made Pittsburgh too tough in the end.

"Pittsburgh showed us how to win the games. Give them props for whatever they did, because there were times of games when we were better, especially game 6, and they stayed calm and they knew they were going to get their opportunities and have the chance to win the game, and I think that's one of the reasons why they won the series, because they were more experienced."

Finally, captain Claude Giroux spoke and talked about a lot of the positives from the season. He spoke of the growth that the young players showed in the season, notably Nolan Patrick and Travis Konecny.

Giroux talked about his move to left wing, which led to a career season, saying he was surprised by the move at first but was open to anything and that he has always had good chemistry with Sean Couturier.

He added that he likes the core group and hopes the same group is back next season.

Giroux also said that he thinks the Flyers could be a legitimate contender as soon as next season, saying the team is on the right path and that he is excited for next season.

The Flyers already options forward Oskar Lindblom and defenseman Travis Sanheim to the Phantoms on Monday afternoon and they practiced with the Phantoms on Tuesday. They were not part of the end of year media availability since their seasons continue in the AHL.

Head coach Dave Hakstol and GM Ron Hextall will be addressing the media on Thursday morning. Hakstol will speak at 11 a.m. with Hextall following.