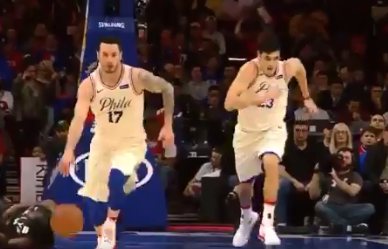 The Pistons were fighting for their right to stay in the Eastern Conference playoff hunt, even though they needed to win out with five games left, and the Bucks to lose out in the same amount of time.

The Pistons kept it close especially at the end of the game, but the Sixers shooters made sure the game wouldn't be lost.

As mentioned before, Redick was on fire. He shot an insane clip from the both the field and from beyond the arc. He was 10-of-13 from the field, 5-of-7 from downtown and finished with 25 points and six assists.

Four of the five Sixers starters finished in double figures. Ben Simmons had 16 points, Ersan Ilyasova had 13, Robert Covington 12. Amir Johnson nearly finished with a double-double, notching nine points to go along with his 10 rebounds.

Off the bench, it was Marco Belinelli who shined, scoring 19 points, with four boards, two assists, and three steals. The number that stood out though was a team-high four turnovers, which proved to be the reason why the Pistons stayed in the game late.

The scoring surprise of the night for Detroit was Anthony Tolliver, leading the way with 25 points. Stanley Johnson finished with 19 points, Reggie Bullock had 15, and former Sixer, Pick Swap Pod Process Hall of Famer Ish Smith scored 14 points with 12 assists off the bench.

At the end of the day, Andre Drummond was really a non-issue for the Sixers, not needing to truly worry about him without Embiid on the floor. Drummond scored 13 points with 15 rebounds.

Before losing to the Sixers, the Pistons had won five straight games including seven of their last eight. Their playoff hopes are officially gone, as the Sixers hopes of obtaining the No. 3 seed in the Eastern Conference continue on.

The Sixers have perhaps their biggest game of the season on Friday, when LeBron James and the Cavs visit the Wells Fargo Center. The Sixers and Cavs are currrently tied for third, as Cleveland had off on Wednesday.