Eagles Flyers Phillies Sixers Union About Us Write For Us
Previous month:
March 2018
Next month:
May 2018 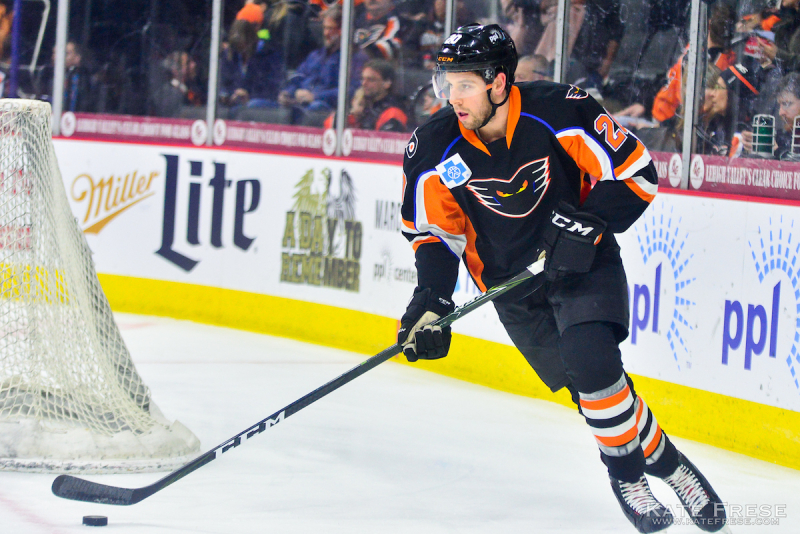 One night after a 4-1 win over Providence gave them a 2-1 series lead, the Lehigh Valley Phantoms put together a tremendous first period in a potential elimination game, they nearly let it get away.

The Bruins rallied back from a three-goal deficit to tie the game and force overtime. They were in total control, even in sudden death, when Maxim Lamarche stepped up and played hero.

Lamarche scored the game-winning goal with 1:24 left in overtime, giving the Phantoms a 4-3 win and sending them to the second round of the Calder Cup Playoffs with a 3-1 series win.

The Eagles wasted no time jumping into the undrafted free agent pool, adding __ such players to the roster.

Learn which players will be looking to impress the coaches to earn a job below.

When the Flyers season came to an end on Sunday, they locked up the 19th overall pick in the 2018 NHL Draft by their own result. The pick acquired from the St. Louis Blues was still up in the air with the draft lottery.

The draft lottery was held on Saturday night, and the Blues, who had the second longest odds to get a lottery pick, did not get one of the top three spots in the draft, meaning the Flyers will retain the pick at 14th overall.

The Eagles neglected to draft a running back in the 2018 NFL Draft, but it appears that decision was all part of a bigger plan.

After the NFL Draft concluded Eagles executive vice president of football operations met with the media and announced that the team has resigned running back Darren Sproles.

Getting to know the Eagles day 3 selections

The Eagles used day three of the draft to add depth to their Super Bowl winning roster. The team added two defensive prospects in round four that could both work their way into playing time over the course of the 2018 season, and two offensive line prospects with high ceilings but uncertain floors.

Without further adieu, here are the newest members of the Philadelphia Eagles.

Continue reading "Getting to know the Eagles day 3 selections" »

The Philadelphia Eagles made their first selection in the NFL Draft after trading back with the Baltimore Ravens on Thursday night, and then trading their 52nd overall pick three spots up to No. 49 to take tight end Dallas Goedert of South Dakota State.

The Philadelphia Phillies have placed RHP Ben Lively on the 10-day disabled list with a lower back strain. In a corresponding move, the club recalled RHP Jake Thompson from Triple-A Lehigh Valley.

Lively fell to 0-2 with a 6.85 ERA after allowing seven runs in 2 1/3 innings Thursday afternoon in the series finale against the Arizona Diamondbacks. The right-hander joins Jerad Eickhoff (strained right lat) as the latest Phillies starting pitcher to be placed on the disabled list due to injury.

Thompson has allowed five runs (four earned) in five innings and two appearances so far this season with the Phillies. The right-hander made the Phillies Opening Day roster, but was sent down on April 7 to create room for Jake Arrieta on the 25-man roster.

Filling Thompson's IronPigs roster vacancy will be No. 12-ranked club prospect Seranthony Dominguez. Dominguez had an 18-2 strikeout-to-walk ratio in 13 innings this season with Double-A Reading.

The Philadelphia Phillies (15-9) will begin the third and final series of their 10-game homestand, as they begin their third series of the season against the Atlanta Braves (14-10) Friday evening at Citizens Bank Park.

Aaron Nola and Julio Teheran will face off for the third time in 2018. The Phillies fell in both of the SunTrust Park meetings, 8-5 on Opening Day and 2-1 on April 16.

Just one game separates the Phillies and Braves in the National League East standings. The Phillies trail the division-leading New York Mets — who begin a road series Friday against the San Diego Padres — by a 1/2 game.

Phillies Nuggets: How much has each regular been worth thus far?

At the outset of the Philadelphia Phillies 2018 season, we were pretty sure of one thing - the offense was going to thrive. The bullpen, on paper, had a chance to be pretty good, though key pieces like Luis Garcia, Edubray Ramos and Adam Morgan had been inconsistently effective leading up to the 2018 season. And the starting rotation, behind Aaron Nola, was a major question mark.

Well, go figure, through the first month of the season, the Phillies starting pitching staff has been one of the best in the sport, posting a 3.37 FIP and 3.50 ERA. Sure, Nola has been good, but Jake Arrieta, Nick Pivetta and Vince Velasquez have arguably been as good - if not better.  Since a meltdown in the team's Opening Day loss, the bullpen - led by Victor Arano, of all people - has been very good and figures to get better when Pat Neshek and Mark Leiter Jr. return.

So below, nearly one month into the season, is a look at how valuable each Phillies regular has been in terms of dollars and fWAR. The results, as you might imagine, are all over the place.

Continue reading "Phillies Nuggets: How much has each regular been worth thus far? " »

A look at the Eagles 2nd round options

The Eagles did not surprise many when they decided to trade out of the first round. While they added a second round selection in 2019 to their draft capital, they still only have six picks in this year's draft. The difference is that now they have a second round pick instead of a first round pick.

The Eagles will go on the clock with the 52nd overall selection in the second round on Friday night. With some big names slipping out of the first round, the Eagles have a chance to acquire a great player late in the second round. Take a look below at what players could be wearing midnight green in the fall.

Continue reading "A look at the Eagles 2nd round options" »