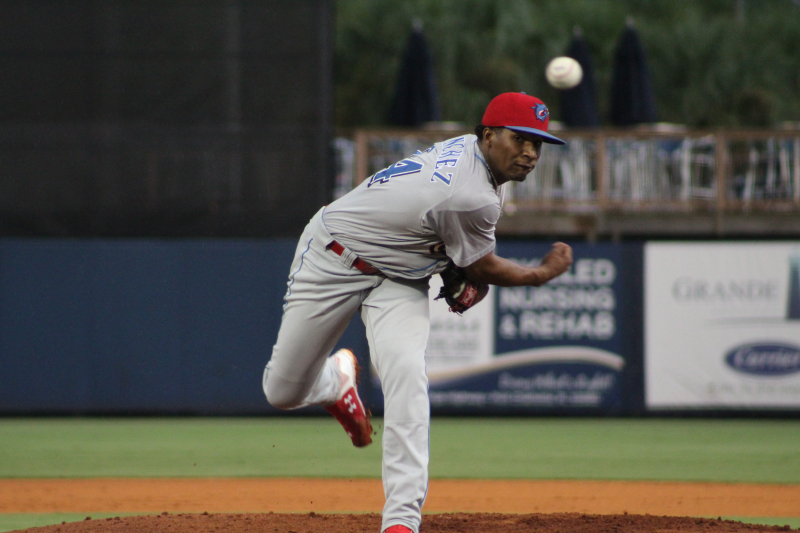 The Phillies will play their first game of the season at Citizens Bank Park on Thursday afternoon when they host the Miami Marlins.

While the Phillies will be spending their afternoon kicking off their home schedule, it will be opening day for the 247 minor league clubs around baseball.

Below you can see where the Phillies top 30 prospects ranked by MLB.com will be starting their 2018 campaigns as they try to make their way up the organization's ladder.

Sixto Sanchez has quickly become the crown jewel of the Phillies farm system, drawing comparisons to hall of fame pitcher and former Phillie Pedro Martinez. The 19-year old won't reach the majors this season, but there is no doubt you will hear his name often in prospect updates this season.

Kingery looked like he would start the season in Lehigh Valley, but a bold move by general manager Matt Klentak to sign Kingery to a contract that includes up to nine years of team control guaranteed the touted prospect a spot on the opening day roster.

Kingery has started three games for the Phillies so far this season and has picked up four hits in his first 14 at-bats.

Crawford got a cup of coffee with the Phillies last season after overcoming an early slump as he adjusted to life at the AAA level. Crawford rebounded with a second half that the Phillies couldn't ignore and he earned his much awaited promotion to the show. Crawford showed enough in his late-season stint in the majors to convince the Phillies to trade away the ever-reliable Freddy Galvis in order to clear the way for Crawford in 2018.

Medina will join Sixto Sanchez at the top of the Threshers rotation, making for a must-watch one-two punch down at Spectrum Field.

The 21-year old is best known for a fastball that he commands well and throws in the mid-90s consistently.

Moniak was the first overall pick in 2016 by the Phillies. Some scouts have already soured on the prospect, believing that he will never gain the strength to become a consistent source of power in the majors. Moniak is still growing into his body, but even without the power he figures to become a major league player based on his ability to play in the field and hit for contact.

Taken one year after Moniak, the Phillies used the eighth overall selection on Haseley to add another developed bat to the organization.

Haseley was a sound two-way player at the University of Virginia, and will carry the offense in Clearwater alongside Moniak.

Alfaro – like Crawford – found his way to the Majors at the end of the 2017 season.

The strong-armed catcher has stepped into 2018 in a platoon with Andrew Knapp early in the season. While Alfaro has struggled at the plate thus far in 2018, his esteemed arm has been on display behind the plate, managing to gun down the speedy Jose Reyes twice in the same game on Tuesday night.

The Phillies threw a large portion of their international player money at Ortiz in 2015, and they are starting to see some return on investment from the 19-year old.

Ortiz has the potential to be a difference making bat, hitting .302 with eight home runs last season in 47 games at Low-A Williamsport. He'll look to take the next step in Lakewood.

Romero stood out in 13 starts at Lakewood last season, with a dominant 2.11 ERA. Now he leap frogs over Clearwater and goes right to AA out of Lakewood in 2018.

Kilome will form a formiddable duo in the Reading rotation next to Romero. Kilome's fastball is already seen as Major League-quality. He'll attempt to master his curveball and develop his changeup to make a push for the Majors possible.

Gamboa's strengths are his defense and speed. He'll look to add a reliable bat to his resume in 2018.

Suarez progressed through both Lakewood and Clearwater last season. Now the starting pitcher's climb continues in 2018 with his first taste of AA.

Dominguez has been a part of the organization since 2011 when he was signed as an international prospect. The 23-year old possesses a powerful fastball but lacks the secondary pitches and control to go past AA at this time.

Brito flashed good hitting ability but attempted to become a better power hitter and that derailed him. Brito will try to get back to basics in 2018 at A Lakewood.

The key prospect in the aforementioned Freddy Galvis trade, De Los Santos has a powerful fastball and a changeup that has shown promise. A reliable curveball will be the final piece for this prospect to get a shot at the majors.

Eshelman dominated in 2017. Part of the Ken Giles deal with the Houston Astros, Eshelman went 10-3 with a 2.23 ERA in 18 starts at AAA Lehigh Valley last summer. Eshelman will try to prove that his lights-out performance a year ago was no fluke and earn a spot on the Phillies 40-man roster by season's end.

Roman Quinn caught the eye of new manager Gabe Kapler in the spring, but talent has never been the question for Quinn. Unable to put together a healthy ceiling, the exciting speedster will need to stay healthy if he ever wants to reach the big leagues.

The 10th overall pick by the Phillies in 2015, Randolph is beginning to take steps in his assent up the organization's ladder after struggling to find his rhythm at the lower minor league levels. The good news for Randolph is that he's only 20-years old. The Phillies will want to see him cut down on his strikeouts and pick up his average as he gets his first shot at AA.

Speaking of strikeouts, that is the only thing holding back Rhys Hoskins's former bash brother in Lehigh Valley. Cozens has the kind of power that cannot be ignored, but he has a strikeout rate that can be.

The mammoth outfielder hit .210 with 194 strikeouts in 135 games at AAA Lehigh Valley last season. He may not get his chance in the pros until he improves his discipline at the plate.

The Phillies got Gomez when they traded reliever Pat Neshek to the Colorado Rockies last season. He hit .250 with Clearwater last year but will see his start to 2018 delayed as he works through extended spring training to start 2018.

It's hard to miss the 6'10 southpaw. A 22nd-round pick in 2016 – Young is viewed as a bit of a project but he has received praise for having a consistent delivery that gives him a strong base to help him build up his profile as a prospect.

Physically, Morales is everything you want in pitcher, with a sturdy and tall frame at 18-years old. Morales's start will be delayed in 2018 as he is in extended spring training.

Howard got hit around in his debut at Low-A Williamsport last season (4.45 ERA), but he also flashed the ability to limit contact, striking out 40 batters over 28.1 innings in his pro debut.

Mills came the organization after Howie Kendrick was sent to the Nationals last season. The 22-year old has three pitches that are at the "average" level, but until he develops them further he may struggle to climb up the team's list of prospects.

Mills, Sixto Sanchez, and Adonis Medina will make for a lot of fun pitching performances in Clearwater this season.

Anderson has come back from Tommy John surgery in 2015 to find himself now one step away from the majors. His lone start in AAA last season was impressive, but now he needs to prove that he can pitch that way in more than one outing before jumping to the majors.

Like Anderson, Irvin lost time due to Tommy John. The 24-year old lefty has not yet pitched in AAA, and has not been especially dominant in the lower levels of the organization to this point. Irvin may be in need of a big season at AAA to keep his hopes of being in the majors alive.

It will be a little while before Garcia approaches the majors, but the 17-year old is a promising prospect who was ranked seventh among international prospects a year ago.

Arano did not pitch in AAA last season, but showed enough in AA to jump to the majors late last season. Now back in the bullpen to start 2018, Arano has been perfect through three innings in 2018 – showing that the leap over AAA was the right decision early on.

Looking like a Rick Vaughn lovechild, it is easy to want J.D. Hammer to succeed. Another player acquired from Colorado in the Neshek trade. Like Rick Vaughn, Hammer looks like he will come through the organization as a closer, with a hard ad lively fastball and a slider to match. Command of the strike zone will be the biggest point of development for Hammer.

Gowdy was considered to be excellent value in the second round when the Phillies selected him in the 2016 draft. He still has promise, but will miss all of the 2018 season as he rehabs from Tommy John surgery that he received last August.