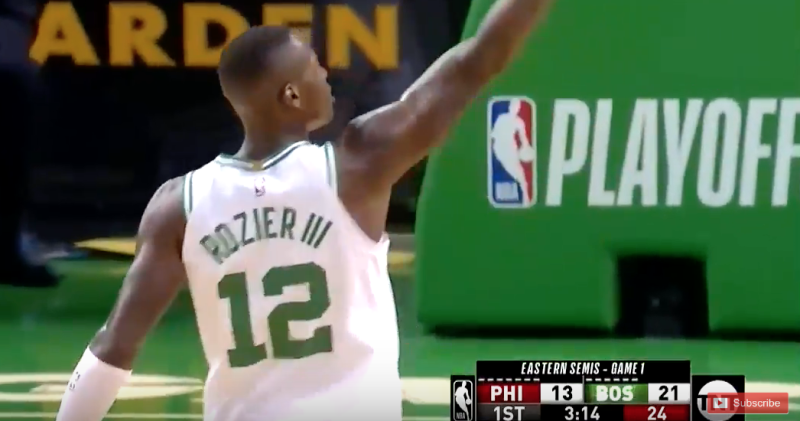 Well that was a game to be forgotten. Of all ways for a Game 1 to go, this wasn't the ideal scenario for the Philadelphia 76ers (0-1) against the Boston Celtics (1-0) on Monday night.

It was the Terry Rozier game for the Celtics as the guard did everything right in all the right ways for Boston. Rozier finished the contest with 29 points, and an unbelievable 7-of-9 from beyond the arc, and added eight rebounds, and six assists.

The Celtics had three of their starters finish with double-digits scoring. Rozier's 29 was joined by rookie Jayson Tatum (28) and Al Horford (26). Marcus Morris led the Celtics with 11 points off the bench.

The difference maker for stopping the Sixers was the Celtics' perimeter defense, that halted all opportunities to make an impact from beyond for Philadelphia.

Joel Embiid led all scorers with 31 points on 12-of-21 shooting. Embiid also finished with 13 points and five assists. JJ Redick had 20 points on 7-of-13 shooting. Ben Simmons had 18 points, seven rebounds, and six assists.

Marco Belinelli was the standout off the bench for the Sixers, only scoring 11 points in 28 minutes.

The Sixers will need to figure out how to defend the Celtics' perimeter shot in order to take Game 2 Thursday night in Boston. Obviously, the night Terry Rozier had isn't going to be replicated like it was tonight, but the Sixers will need to make sure Rozier and other sharp-shooters don't get the same open looks.

Additionally, if the 3-point shot isn't falling, don't keep attempting the same shots. Robert Covington had yet another awful shooting night, going 0-for-6 from the field, 0-for-4 from three, for three points. The Sixers will need to turn their attention to other opportunities to score points, as it's not always going to work in their favor.

The Sixers will try to even the series on Thursday night back in Boston for Game 2.