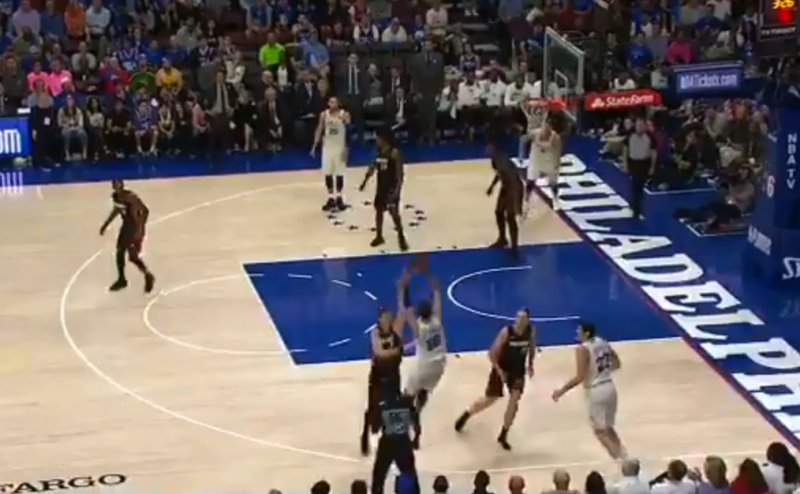 The famous saying goes: "Good things come to those who wait."

That's exactly what occurred on Saturday night as the Sixers blew out the Heat at home to take Game 1 of the first round and a 1-0 series lead.

The win is the Sixers' 17th straight, extending from their franchise record 16th straight from the regular season.

The win is also the Sixers' first in the playoffs since May 23, 2012 against the Boston Celtics.

The game started out slow for Philadelphia, never really taking any kind of major lead, especially with Miami sticking around for most of the first half.

The Heat went into the locker room at halftime leading by four points, 60-56.

As the second half commenced, the Sixers took the game into their own hands and really took off from there.

The Sixers outscored Miami 34-18 in the third quarter, followed by a 40-25 outburst in the fourth quarter.

The Sixers' X-factors of the game had to be Marco Belinelli and Ersan Ilyasova coming off the bench. The two Atlanta Hawk products combined for 42 points, 16 rebounds, and two assists. Belinelli finished with 25 points on 9-of-17 shooting including four 3-pointers, while Ilyasova had 17 points on 7-of-15 shooting with 14 rebounds.

Ben Simmons tore threw the Heat defense, finishing with 17 points, 14 assists, and nine rebounds, one board shy of a triple-double in his first playoff game of his rookie season.

Speaking of rookies, Markelle Fultz had a solid game for not having a ton of season experience. He scored just five points, but had four assists, two rebounds, and two steals in just 14 minutes of playing time.

The Heat had a big scoring night from Kelly Olynyk off the bench, despite his five personal fouls. He finished with 26 points and seven rebounds. Goran Dragic had 15 points, James Johnson had 13, and Dwyane Wade 11 off the bench.

The Heat made it a ballgame early on, especially with questionable calls from the officials against the Sixers, but Brett Brown's team made adjustments where necessary and really took control of the game once the first half came to a close and the second half began.

The Sixers forced shots here and there, Amir Johnson struggled at times as Embiid's replacement, yet made the occasional miraculous shot.

As for the Sixers standouts on Saturday night, the game ball has to go to Marco Belinelli, who literally willed his way on two deep threes late in the game that the Wells Fargo Center crowd rallied around and carried the momentum for the rest of the game.

Marco Belinelli playing out of his freaking mind. Dude has been ridiculous. pic.twitter.com/WHX3nAgO5n

The Sixers were clearly the better team, and heading into Game 2 Monday at the Wells Fargo Center, they have the momentum to take a 2-0 series lead to South Beach.