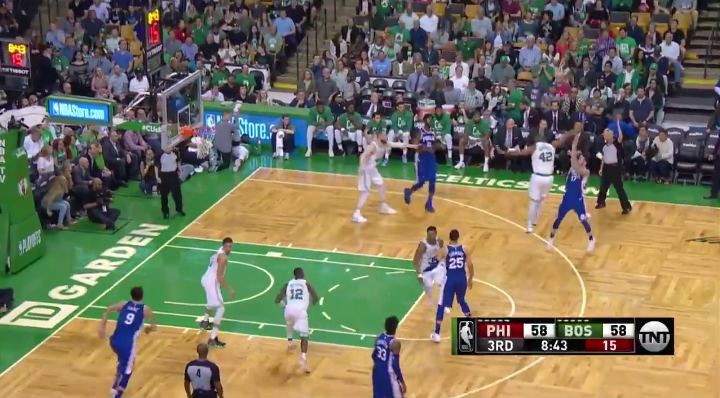 The Sixers were a sight for sore eyes in the first half of game two after an abysmal performance in game one – that is until the Boston Celtics roared back from an early 21-point deficit and managed to ride the momentum of their comeback into a 2-0 series lead.

The Sixers shook off the cobwebs from game one early as J.J. Redick exploded to score the first eight points of game 2. Redick made two early threes – matching the total makes he had in game one.

Boston did not generate much momentum early until Jaylen Brown entered the game after missing game one with an injury. Brown immediately scooped up a loose ball and threw down a jam to get the crowd on their feet.

Despite the pushback from Boston the Sixers never trailed in the first quarter and led 31-22 after one. The Sixers outrebounded Boston 18-10 and had 10 assists to Boston's three in a dominant first quarter.

The Sixers continued to roll early in the second quarter, opening the quarter on a 14-2 run that helped the Sixers lead by as many 21.

With the game in control, the Celtics found a way to cut into the deficit and erase the large gap that the Sixers built. A string of threes from Terry Rozier, Marcus Smart, and Jaylen Brown helped cut the Sixers lead down to five by halftime as part of a 25-8 run as the Sixers clung to a 56-51 lead heading into the half.

The Sixers were led by J.J. Redicks 15 points at halftime and Boston was paced by Marcus Smart's 14 points. Joel Embiid scored 10 points and grabbed 10 rebounds securing a first half double-double.

The Celtics wasted no time tying the game in the second half, knotting it up at 58 after two free throws from Terry Rozier. It was the first tie of the game since the opening bucket of the game.

The Celtics took their first lead of the contest moments later when an Aron Baynes (yes, THAT Aron Baynes) three gave Boston a 64-63 lead.

The Celtics began to seize control from there taking a 76-68 lead as part of a 45-17 run dating back to the second quarter.

After Brett brown called a much needed timeout the Sixers cut the Boston lead down to four after buckets from Embiid and Marco Belinelli.

The Sixers would trail by four going into the final frame with Boston holding a 79-75 after three quarters on the back of a 10-point quarter from Jayson Tatum.

Four quick points from T.J. McConnell tied the game at 79 to open the fourth quarter. Boston jumped back out to a small lead and forced the Sixers to chase them until Joel Embiid hit his first three of the night in transition to give the Sixers an 88-86 lead.

Two free throws from Jayson Tatum tied the game once again, but Robert Covington answered by drilling a three with Chester-native Marcus Morris leaving the swingman with no room to breathe. The Sixers held a 91-88 lead with seven minutes left in regulation.

T.J. McConnell played an incredibly long run in relief of the struggling Ben Simmons, but after a Terry Rozier three-pointer cut the Sixers lead to two Brett Brown inserted the rookie point guard back into the game.

The Celtics continued to ride the momentum of Rozier's three and two more makes from beyond – one from Rozier and one from Morris – gave Boston a 99-95 lead late in the fourth.

Boston stretched the lead to six after Terry Rozier threw up a lob to Jayson Tatum in transition and brought everyone on the TD Garden to their feet with 2:23 remaining in regulation.

The Sixers cut the lead to three with about 30 seconds to go in the game, and strangely the Sixers opted to not foul. The Celtics wound the clock down before Al Horford drove to the cup and made it a two possession game with 8.3 seconds left.

Two points from Dario Saric were quickly cancelled out by two Jayson Tatum free throws to seal the 108-103 victory for Boston.

J.J. Redick led all scorers with 23 points. Robert Covington had 22 points and nine rebounds, and Joel Embiid was the third Sixer to score 20 points with 20 and 14 rebounds. Dario Saric (14) and Marco Belinelli (11) were also in double figures for the Sixers.

The Sixers will look to climb out of the 0-2 hole on Saturday when they return home for game three.