Eagles Flyers Phillies Sixers About Us Write For Us
Previous month:
April 2018
Next month:
June 2018

Although everything at this point that comes out in the news other than an update on the Bryan Colangelo secret Twitter account situation seems irrelevant at this time, business within the organization must still go on as normal.

The Sixers are in search of a new top assistant coach to their staff to replace longtime assistant Lloyd Pierce, who was hired by the Atlanta Hawks to fill their head coaching position just a couple weeks ago.

Sixers coach Brett Brown is discussing with Monty Williams a role as top assistant, league sources tell ESPN. Williams is working in the Spurs front office, but has been eager for a return to coaching.

Rhys Hoskins has a fracture in jaw, likely looking at trip to disabled list

Rhys Hoskins was able to double in a pinch-hit appearance in Tuesday night's Philadelphia Phillies win over the Los Angeles Dodgers, but the 25-year-old is out of the starting lineup again Wednesday night. According to manager Gabe Kapler, he may be out of the lineup for the next few weeks.

Hoskins - who fouled a ball off of his mouth, forcing him to leave Monday night's game with two outs in the top of the ninth inning - is likely heading to the disabled list. Kapler told the collective media, which included Todd Zolecki of MLB.com, that Hoskins has a fracture in his jaw:

Continue reading "Rhys Hoskins has a fracture in jaw, likely looking at trip to disabled list" »

While most Philadelphia Phillies fans thought RHP Aaron Nola has thrived in the month of May — going 3-1 with a 1.91 ERA in 33 innings with another start yet scheduled for May 31 — top offseason acquisition RHP Jake Arrieta managed to perform even better.

In five starts and 30 innings, Arrieta allowed just five runs — three earned — with a 0.90 ERA. In his final May outing on Tuesday against the Los Angeles Dodgers, Arrieta tossed seven shutout innings while allowing six hits and two walks.

Arrieta also finished May with just one home run allowed, matching his April yielded home run total. This was the fifth time in his career the right-hander allowed one home run or none in consecutive months, and his first since May-June 2016.

When the Phillies signed Arrieta to a three year, $75 million contract in March, they expected him to be at least top-two talent rotation arm to complement Nola. So far through 10 starts, Arrieta has done just that and more. With the Phillies poised for their first postseason run since 2011, they will rely on Arrieta even more come October.

The Philadelphia Phillies (30-22) will continue their 10-game, 11-day road trip on Wednesday, as RHP Zach Eflin opposes RHP Ross Stripling and the Los Angeles Dodgers (25-29) in the third of a four-game set at Dodger Stadium.

The Phillies evened the series and snapped a four-game Dodger Stadium skid on Tuesday with a 6-1 victory. Starter Jake Arrieta tossed seven shutout innings and earned his fifth victory, while opposing starter Kenta Maeda lasted just 1 2/3 innings due to a strained right hip. Phillies utility player Pedro Florimon also exited early with a broken right foot. Nick Williams got scoring going early in the second with a solo home run, and the Phillies never looked back, with RBI singles by Odubel Herrera and Maikel Franco, and RBI doubles by Jorge Alfaro and Carlos Santana added later in the contest.

Prior to the game, Mitch Walding received the call-up from Triple-A Lehigh Valley to replace Florimon on the 25-man roster. Walding will make his big league debut as the starting third baseman. In a corresponding move, Jerad Eickhoff (lat) was transferred to the 60-day disabled list.

The Phillies sit in third place in the National League (NL) East, and trail the division-leading Atlanta Braves by one game. Overall in the NL, the Phillies rank fourth in winning percentage (.577) and run differential (+42).

Fan voting for the 89th Major League Baseball All-Star Game — to be played at Nationals Park on Tuesday, July 17, 2018 — will officially get underway at noon on Friday, June 1.

Philadelphia Phillies listed on the position-player ballot include:

The official ballot excludes three Phillies Opening Day starters: right fielder Nick Williams, shortstop J.P. Crawford and catcher Andrew Knapp. Crawford has been sidelined since April 29 with a right forearm strain, while Williams and Knapp have been limited to platoon roles with Altherr and Alfaro, respectively.

Fans can vote on MLB.com, all 30 club websites, and the MLB At Bat & Ballpark mobile apps.

Phillies to call up Walding to replace injured Florimon 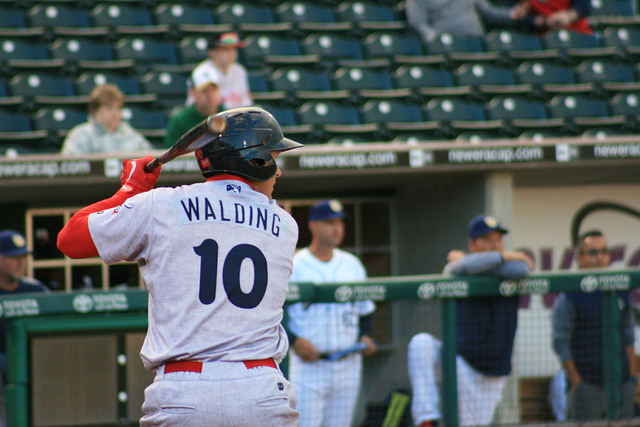 With Pedro Florimon headed to the disabled list after breaking his right foot in Tuesday's 6-1 victory over the Los Angeles Dodgers, the Philadelphia Phillies will call up 1B/3B Mitch Walding from Triple-A Lehigh Valley on Wednesday, according to The Athletic's Matt Gelb. Walding will make his big league debut as the starting third baseman, batting seventh.

The Phillies must select the Lodi, California, native's contract prior to his addition to the 40-man and 25-man rosters. To do so, the Phillies transferred RHP Jerad Eickhoff to the 60-day disabled list.

Walding was drafted in the fifth round of the 2011 amateur draft out of St. Mary's High School in Stockton, California. 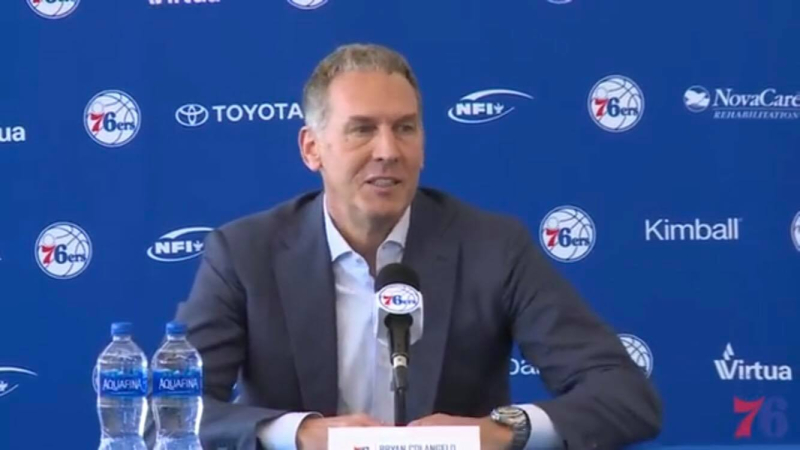 The last thing we all expected to be doing on a Tuesday night in Sixers offseason was finding out that Philadelphia 76ers President of Basketball Operations has reportedly been linked to a handful of fake Twitter accounts that gave out organizational information, criticized other front offices and talked poorly about players. On Wednesday morning, the Sixers released a statement on the matter, signaling they'd conduct an investigation of their own:

"“An online media outlet filed a story linking multiple social media accounts to 76ers President of Basketball Operations Bryan Colangelo. The allegations are serious and we have commenced an independent investigation into the matter. We will report the results of that investigation as soon as it is concluded."

Now to the actual story. Ben Detrick of The Ringer investigated a tip he received back in February that Bryan Colangelo was operating five secret Twitter accounts. All of the accounts followed members of the media that covered the team, Sixers staff and agents around the league.

After fouling a ball of his foot in Tuesday evening's 6-1 victory over the Los Angeles Dodgers at Dodger Stadium, Philadelphia Phillies utility player Pedro Florimon is reportedly headed to the 10-day disabled list with a broken right foot.

Florimon, 31, injured his foot in the first inning as the starting third baseman. He finished the at-bat by flying out — despite being in pain with a bone fracture near his big toe — and was replaced by Maikel Franco the next half-inning.

A corresponding move to replace Florimon will be made on Wednesday. With J.P. Crawford (forearm) still on the mend in his rehab assignment at high-A Clearwater, it is unlikely the Phillies will rush him back, philly.com's Matt Breen notes. Instead, Breen writes that the club will "likely add a non-roster veteran from the IronPigs."

UPDATE: Phillies to call up Walding to replace injured Florimon

In 33 games and 62 plate appearances this season, Florimon is slashing .263/.323/.491 with 11 runs, seven singles, five doubles, one triple, two home runs, five RBI and five walks. Florimon has fielded five positions in 2018, including two games and two innings as pitcher. 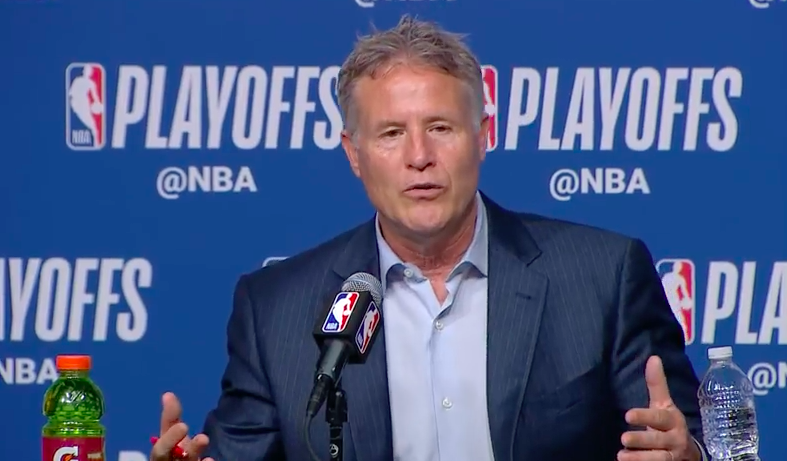 After the first 50-win season for the franchise since the 2000-01 campaign, the Philadelphia 76ers and head coach Brett Brown have reportedly come to an agreement on a contract extension. The news was first broken by ESPN NBA insider Adrian Wojnarowski on Wednesday night.

The Phillies aren't getting sufficient production in right field 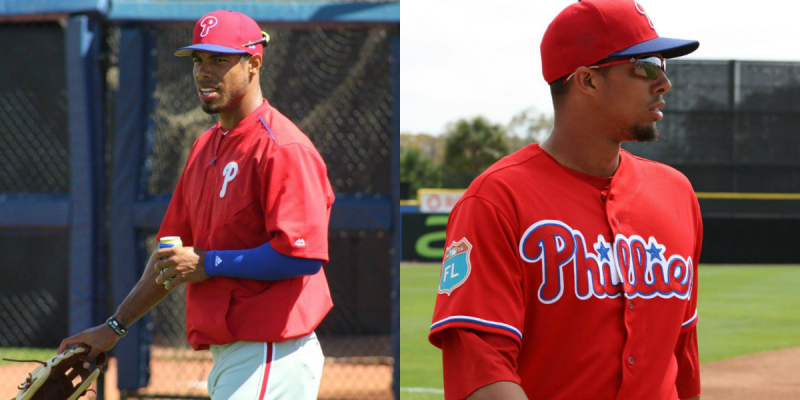 Neither Nick Williams (left) or Aaron Altherr (right) have given the Phillies consistent production in right field. (Brandon Apter and Frank Klose/STP)

When Philadelphia Phillies general manager Matt Klentak signed first baseman Carlos Santana to a lucrative free-agent contract this past offseason, the thought was that it gave the Phillies a surplus of starting-caliber outfielders. Rhys Hoskins, whose natural position was first base, would play left field regularly. Odubel Herrera would remain the team's starting center fielder. And Aaron Altherr and Nick Williams, both of whom were viewed as viable starting options, would compete for time in right field.