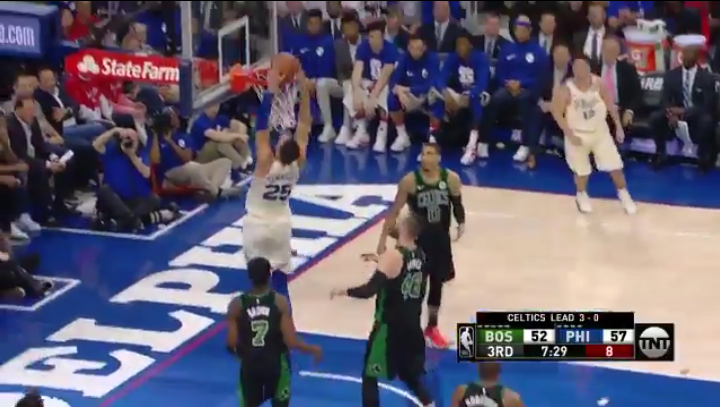 In a 3-0 series hole the Sixers turned to T.J. McConnell, who responded with a career-high 19 points in his first playoff start and willed the Sixers to a 103-92 game four victory over the Boston Celtics.

It was ugly basketball at the outset for both sides as the Celtics and Sixers both started the game by making just one of their first six field goal attempts.

Once both teams got the lid off of the bucket it was a tens first quarter as neither team managed to pull away. The first quarter consisted of seven lead changes and three ties.

The Sixers leaned on J.J. Redick in the first quarter, who led the team with seven points. He was the catalyst for one of the many lead changes, scoring five consecutive points to give the Sixers a 19-18 lead.

Marcus Smart would hit a late pull-up jumper to make it a 22-21 Boston lead. T.J. McConnell would miss right before the buzzer with a pull-up of his own and Boston would take the lead into the second quarter.

The Celtics would not relinquish their lead until the final moments of the second quarter.

It was Ben Simmons with two free throws that gave the Sixers a 40-38 lead.

The lead change was met with a slew of turnovers and fouls from Boston, one of which involved Terry Rozier.

Rozier was called for an offensive foul that he vehemently disagreed with. Joel Embiid approached Rozier to retrieve the ball after the Sixers were awarded possession. Rozier decided to play keep away with the ball and when Embiid persisted Rozier found it appropriate to shove Embiid and throw a punch in the big man's direction. The pair were assessed double technicals.

After the dust settled from the skirmish the two players traded three pointers. The two would clash again on the final possessions of the half. Rozier droze right at Embiid and managed to squeak by Embiid to get the layup at the rim. Rozier made it a two-point game, but it was EMbiid who got the last laugh.

With time running down in the half, J.J. Redick found a cutting Joel Embiid streaking towards the rim and found the big man who promtly threw down a huge two-handed jam to close the half.

The Sixers led 47-43 at the end of the first half. Joel Embiid was the only player in double figures for either team, with 11 points to go with eight rebounds.

The Sixers kept the momentum on their side in the third quarter, not allowing Boston to regain the lead in the quarter.

The Sixers were aided by a five-point possession that was aided by back-to-back technical fouls from Jaylen Brown and Boston coach Brad Stevens.

Shortly after the string of techs, Joel Embiid slammed the ball to give the Sixers a commanding 11-point lead.

The Sixers would stretch the lead to as many as 14 in the quarter, and carried a comfortable 76-65 lead into the final quarter.

The Sixers quickly stretched their lead to 18 as they fought for their playoff lives.

Chester native Marcus Morris willed the Celtics back into the game with an eight point stretch that helped trim the Sixers lead to 10.

Dario Saric was the man to answer Morris's outburst, scoring nine of his game-high 25 points in the fourth quarter.

The Sixers kept the pedal to the metal and withstood the Boston charge late, securing a 103-92 victory.

In addition to his career-high 19 points, McConnell added seven rebounds and five assists along with zero turnovers. Celtics head coach Brad Stevens had praise for the newly-minted starter. "He was great. He's a tough guy," said Stevens after the game. "His impact was tremendous."

Brett Brown was asked about his decision to start McConnell in his post game press conference. "There's an injection of energy that you immediately know you're gonna get with him," said Brown. "What can I do to help the team the most?…To maintain their spirit? There's no better player for that than T.J."

The Celtics were led by 20 points from Jayson Tatum. Marcus Morris (17), Marcus Smart (14), Terry Rozier (11), and Al Horford (10 points and 10 rebounds) were the other Boston scorers in double figures.

The Sixers dominated Boston on the glass, winning the rebound battle 53-43. The Sixers had 24 assists to Boston's 16, and won the turnover battle by only surrendering possession eight times while Boston did so 15 times. The Sixers attempted 19 more field goals than the Celtics.

Game five will be played at TD Garden in Boston on Wednesday. The time of the game is to be determined.