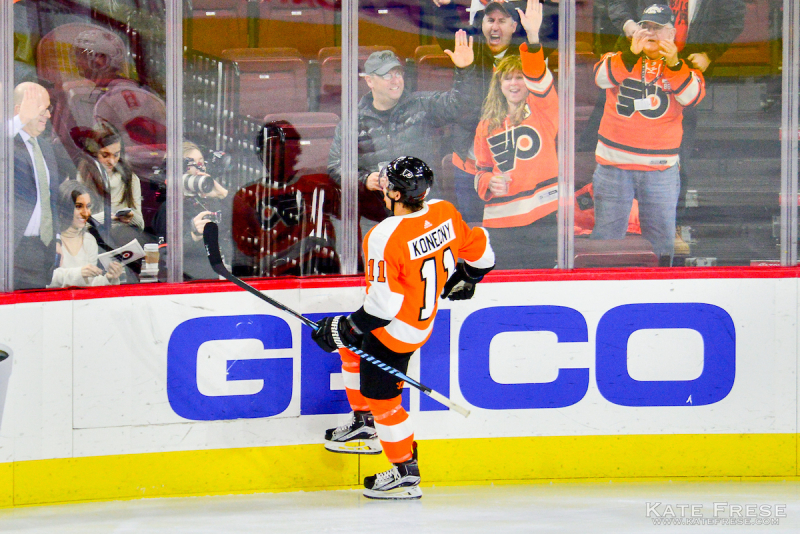 The Philadelphia Flyers may have found their first line winger of the future in Travis Konecny.

Last season, with an increased roll in the lineup, Konecny impressed, nearly doubling his point total from his rookie season. While he still made mistakes at times, he improved in his second year with the team, showing he can be a first line winger.

Konecny took some time to take off at the beginning of the season. The Flyers constantly swapped line combinations early in the season and Konecny was one of the many moving parts. Following the Flyers 10-game losing streak in early December, Konecny was moved to the top line with Claude Giroux and Sean Couturier.

Once together, Konecny took his play to another level, continually putting up points. From the beginning of January to the end of the season, Konecny did not go more than three games without registering a point.

Even when the Flyers were starting to struggle near the end of the season, Konecny was one of the few players consistently supplying points, even when taken off the Giroux line and placed on a line with Valtteri Filppula and Wayne Simmonds.

While it may take another year or so for Konecny to fully flourish in a first line role, he still showed why he should be on the first line to start the 2018-19 season. Konecny had a similar problem in his rookie season, taking penalties at the wrong time. While he cut down on that last season, he still took costly penalties that typically come back to hurt your team. The Flyers second first-round selection from 2015 can be an impactful player with both his skill and ability to get into the head of an opponent, but still needs show control and restraint in taking unnecessary penalties.

Konecny also has to improve his defensive abilities. While he possesses great offensive skill, which was on display several times last season, defense is still an area where Konecny is developing. There were situations in the later stages of games where Konecny would be replaced by Michael Raffl or Matt Read for defensive purposes, leading to a decrease in ice time. Konecny could find himself in those situations as his game becomes more well-rounded.

If Konecny can fix his mistakes and continue to grow, there is no doubt that he can be a great first-line winger for the Flyers for the long-term future. He brings a lot to this team already and if given a similar opportunity to play on the top line and remain there, he could improve on the numbers he put up throughout the last half of the season.