Eagles Flyers Phillies Sixers About Us Write For Us
Previous month:
May 2018
Next month:
July 2018

Around the NBA: The LeBron sweepstakes have officially begun

LeBron James has made it official, he will be opting out of his $35.4 million contract to play for the Cavaliers during the 2018-2019 season.  This is the news we've all been expecting, yet it certainly does not mean that he won't be returning to the Cavs next season.  He will simply be doing what he has done two other times in his career, and that is testing the waters of free agency.

The heavy favorites to land James have been the Lakers, Cavaliers, 76ers, Rockets, and Celtics since the season ended.  Although Sixers fans have held out hope that they could land the coveted James, as of late it is beginning to seem like those chances are dwindling.

Continue reading "Around the NBA: The LeBron sweepstakes have officially begun" »

Seventy-nine games into the season, the Philadelphia Phillies find themselves poised for their first taste of the postseason since their franchise-best 102-win season in 2011. Under new manager Gabe Kapler, the Phillies trail the division-leading Atlanta Braves by just two games, while holding a half-game lead over the Los Angeles Dodgers for the second National League Wild Card spot.

Phillies Vice President and General Manager Matt Klentak has the perfect opportunity right in front of him, 10 years later, to mirror Gillick's three crucial 2008 mid-season acquisitions of a starting pitcher (Blanton), relief pitcher (Eyre) and a slugging veteran (Stairs). Making things easier, Klentak could do so by completing not three separate trades with three different teams, but rather one trade from the same team — the Texas Rangers.

Trailing their division by 18 1/2 games, and the second American League Wild Card spot by 15, the Rangers appear to have shifted their focus from 2018 to 2019 and the seasons beyond. Three Rangers veterans with expiring contracts, Cole Hamels, Jake Diekman and Adrian Beltre, would not fit into a Rangers rebuild.

Two reports this past week suggested that Hamels, Diekman and Beltre were all made available on the block. On Sunday, Evan Grant of the Dallas Morning News reported that the Rangers have made Beltre and Diekman available. Four days later, FOX Sports' Jon Morosi reported it has become "increasingly possible" Hamels is dealt before the 89th Major League Baseball All-Star Game on Tuesday, July 17, at Nationals Park.

Per Grant, the Phillies had at least one scout watch the Rangers play against the Minnesota Twins last weekend in Minneapolis. While Hamels and Diekman did not pitch in the series, Beltre slashed .462/.500/.769 with four singles, one double, one home run, three RBI, one walk and two runs scored spanning 14 plate appearances. The Phillies' interest is there.

Acquiring Hamels, Diekman and Beltre would not only bolster the Phillies roster in three facets of the game, but it would also replace and/or define roles of some of the existing players, including Tommy Hunter, Maikel Franco and Vince Velasquez.

PHILADELPHIA, Pa. — It got a little too close for comfort in the ninth inning, but the Philadelphia Phillies (43-36) pulled out a win over the Washington Nationals (41-38). Phils starter Aaron Nola was magnificent yet again. Over seven and 2/3 innings, the righty allowed one run on five hits while striking out eight. This marked the first time that Nola has pitched seven or more innings since May. In addition, he reached a new career high in pitches with 114. Nola is now the third pitcher in the National League to reach ten wins for the season.

While there were plenty of opportunities to do more damage, the Phillies managed to score enough runs to win the game. Rhys Hoskins had another big night at the plate with three hits. He was only a triple shy of the cycle. Maikel Franco and Jorge Alfaro picked up two hits apiece. Nick Williams ended his 0-9 stretch with a single in the third inning.

Free agency opens for the NHL on Sunday and the Flyers are finally in a position to be big spenders. With almost $22 million available in cap space entering the 2018-19 season, the Flyers have the funds to make some deals.

So what do the Flyers do with this cap space? After looking at some of the free-agent targets on Thursday, here's a look at their now positive cap-space situation.

The Philadelphia Phillies (43-36) and RHP Nick Pivetta will take on rookie RHP Erick Fedde and the Washington Nationals (41-38) in the second of a four-game series Friday evening at Citizens Bank Park. The Nationals have lost five of their last six games, seven of their last 10, and 10 of their last 13.

Aaron Nola entered a three-way tie for the most wins in the National League, 10, as he and the Phillies edged the Nationals in Thursday's series opener, 4-3. The right-hander threw a career-high 114 pitches and became the seventh Phillies starter since 1999 to win 10 games prior to July. Jorge Alfaro, Scott Kingery and Rhys Hoskins supplied all the club's offense with a RBI single, sacrifice fly RBI and two-run home run, respectively. Seranthony Dominguez picked up his sixth save, and second in as many days.

The Phillies have won four of seven meetings with the Nationals this season, outscoring them by a plus-eight run differential, 37 to 29. With Thursday's win, the Phillies are now above .500 in both day (17-12) and night (25-24) games this season, and are 13-16 against all National League East opponents.

Philadelphia Phillies right-hander Aaron Nola finished his third season with the club in 2017 with a career 24-22 record, 3.94 ERA and 1.236 WHIP in 60 starts. The seventh overall pick in the 2014 amateur draft was always projected to be a reliable, top-three rotation arm for the Phillies.

Seventeen starts later into the 2018 season, Nola has shown his worth far exceeds such of the aforementioned expectations. The Baton Rouge, Louisiana native improved to 10-2 with a 2.48 in the club's 4-3 series opener win against the Washington Nationals on Thursday, tossing 7 2/3 innings with eight strikeouts. Nola allowed just one run on five hits and two walks spanning a career-high 114 pitches.

With the victory, Nola picked up his seventh straight winning decision at Citizens Bank Park, as well as his 12th straight quality start at the the venue. The last Phillies starter to win seven or more consecutive home decisions is 2008 World Series champion Joe Blanton, who won eight straight from June 2010 to May 2012.

Although the non-waiver trade deadline is over 30 days away, it is becoming "increasingly possible" that the Texas Rangers deal former Philadelphia Phillies World Series champion Cole Hamels before next month's All-Star Game on Tuesday, July 17, according to FOX Sports' Jon Morosi.

While specific teams interested in the 13-year veteran have not been identified, it appears the Rangers — who are in last place in the American League West, 10 games under .500 — are eyeing a rebuild. One team that could be targeting Hamels is the Phillies, who have already been linked via recent rumors to the Rangers' 21-year veteran third baseman and future Hall of Famer, Adrian Beltre.

Read: Phillies Have 'Had Conversation' on Beltre, Donaldson, Machado, Moustakas to Replace Franco

The Kawhi Leonard trade market is heating up with the Sixers, Celtics and Lakers being mentioned the most in trade discussions to acquire the two-time All-Star forward. In a recent article penned by Jake Fischer of Sports Illustrated, the Spurs are said to covet Boston's Jayson Tatum in a deal for Leonard, but the Sixers have held "serious internal discussions" over the last 48 hours about Kawhi. Fischer notes that sources have said that the Spurs have interest in a package revolving around around forwards Robert Covington and Dario Saric. 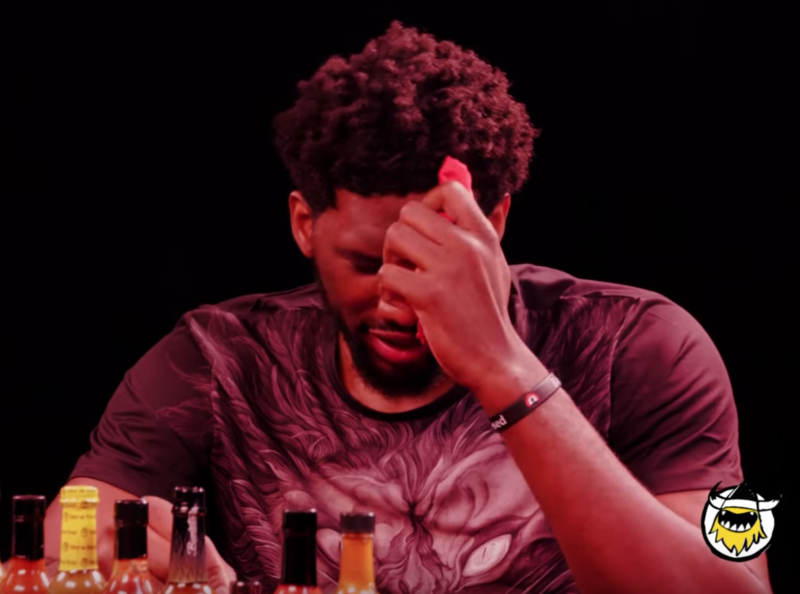 Joel Embiid is a world-class athlete and a dominant center for the Sixers, but you already knew that. Did you know that Embiid also has a knack for dominating food challenges, as witnessed on the Youtube food show, "Hot Ones?"

With the host of the webseries, Embiid talked about a bunch of different stuff, including his fun pick-up basketball pop-ins, Allen Iverson, Meek Mill, and getting to be the cover star of the upcoming NBA Live 19 video game.

He also snacked on some of the hottest chicken wings around, sweating in the process, but finishing out strong.

Take a look below at the full interview.

Disclaimer: This may make you ridiculously hungry, which is what I'm feeling right now as I type this.

Fresh off their 3-0 shutout win — salvaging the series finale against the New York Yankees — the Philadelphia Phillies (42-36) and All-Star-bound Aaron Nola will take on Tanner Roark and the Washington Nationals (41-37) for the first time at home this season in the first of a four-game set on Thursday.

Rhys Hoskins' three-run home run and Zach Eflin's seven-shutout-inning performance were all the Phillies needed to avoid the sweep against the potent Yankees on Wednesday. For Hoskins, his 30th career home run marked the fastest any Phillie ever reached the career milestone, while Eflin recorded the first 5-0 month for a Phillies starter since Cole Hamels in May 2012. Scott Kingery extended his career-long hitting streak to eight games, while Seranthony Dominguez shut the door with two perfect relief innings to secure his fifth save out of six chances.

Nola looks to become the third National League pitcher to reach double digits in wins, joining Jon Lester (10-2, 2.18 ERA) and Max Scherzer (10-4, 2.04 ERA). The right-hander did not earn his 10th win last season until August 28 in his sixth-to-last start.