Former teammate and coach of No. 3 pick Alec Bohm has nothing but positive things to say 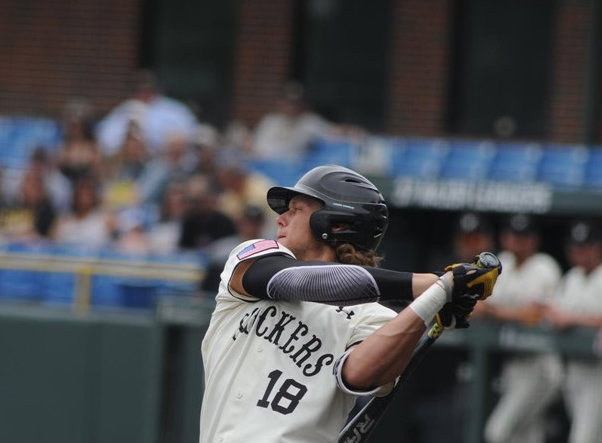 The Phillies selected Alec Bohm with the No. 3 overall pick in the 2018 MLB DRaft. (Wichita State Athletics)

Willie Schwanke has a unique perspective on Philadelphia Phillies No. 3 overall pick Alec Bohm. From 2016-2017, Schwanke was Bohm's teammate on the Wichita State Shockers. In 2018, Bohm's final season in college, Schwanke began serving as a volunteer assistant coach. If anyone knows the new Phillies prospect well, it's Schwanke. And he can't say enough positive things about the 21-year-old.

"He’s a great teammate. He’s one of  those guys that likes to keep things loose in the clubhouse and on the field. That was what I kind of learned about him, so to speak, was when I played with him when I was a pitcher. However, being a coach now I got to work with him in the cages all the time and the one thing I learned about him was how consistent his routine was when it came to hitting. He did the same thing day in and day out; off the tee, flips, batting practice, and in return he had a season and career of continued success. So, the one thing I learned was just how much of a man of routine he was."

That routine worked well for Bohm, who attended Omaha Roncalli Catholic High School in Nebraska prior to his time in Wichita. Undrafted out of high school, Bohm slashed .303/.346/.489 with six home runs and 30 RBIs in his freshman year for the Shockers. In 2017, his sophomore season, Bohm improved every number across the board, slashing .305/.385/.519 with 11 home runs and 40 RBIs. His junior year? You guessed it - he topped every number from his sophomore season, hitting 16 home runs, driving in 55 RBIs and slashing .339/.436/.625.

"He’s very advanced at the plate, especially when it comes to strike zone discipline. When there is two strikes, he's just as comfortable in the box as he was with the first pitch. His approach to hitting is what will allow him to jump up [through the minor leagues] hopefully quickly."

There's little doubt among scouts that Bohm's bat will play at the next level. There are questions about whether he'll be a third baseman at the major league level. While he had many impressive career-highs in his final season at Wichita State, Bohm also posted a career-high 14 errors. After he was selected in the first round of the MLB Draft Monday, Phillies scouting director Johnny Almaraz told the collective media, which included Jim Salisbury of NBC Sports Philadelphia, that he believes Bohm can be an "above-average" third baseman.

Schwanke's success as a pitcher often depended on Bohm's ability to handle the hot corner. Despite 33 career errors, Schwanke thinks that Bohm's drive will allow him to stay at his natural position.

"I think he will be a third baseman at the major league level. The way his work-ethic is when it comes to defense and wanting to work on it will allow him to continue to improve and be able to field at that caliber."

"Alec became the first Shocker ever to hit a home run in his first ever plate appearance for us. That just goes to show you why we all thought he was going to be something special."