Eagles Flyers Phillies Sixers About Us Write For Us
Opinion: Adam Silver is accountable for Colangelo debacle
Vegas: Sixers have second-best odds to win 2019 NBA Finals 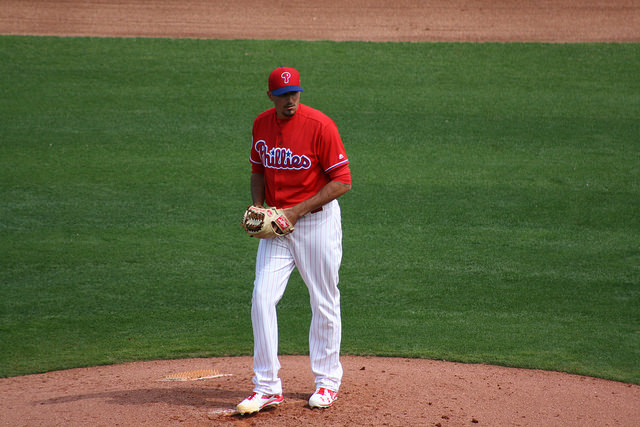 How long will Zach Eflin remain in the Phillies starting rotation? (Frank Klose/SportsTalkPhilly)

Zach Eflin made his first appearance at the major league level in 2018 on May 1. The 24-year-old caught the attention of the baseball world with his first two starts, as he showed an increase in velocity and allowed just one run across 12.2 innings. However, a series of rainouts and three starts in which he lasted less than five innings have him back at the same spot he was at the beginning of the season - the bubble between the Philadelphia Phillies and the Triple-A Lehigh Valley IronPigs.

Eflin allowed five earned runs and seven hits across four innings in an 8-2 loss to the Los Angeles Dodgers Wednesday. Given that there was a 12-day layoff between his second and third starts of the season, it's now been nearly a month since Eflin's last impressive start. As Matt Gelb of The Athletic noted, that's put some pressure on Eflin to turn in a rebound performance in his next start:

He will make his next start, as scheduled, Tuesday at Wrigley Field. His future in the rotation could be dependent on that outing. The Phillies have two possible replacements in Enyel De Los Santos and Cole Irvin. This is not Eflin’s final chance to prove he belongs in the majors. He is 24. He has thrown harder this season. He looks stronger. But the competition below him has raised the bar. That is a good thing for the Phillies.

Acquired in the December 2014 Jimmy Rollins trade with the Dodgers, Eflin is currently 1-2 with a 4.50 ERA in five starts. His FIP of 3.82 suggests he's been better than his 4.50 ERA would lead you to think. Either mark would be a drastic improvement over the 6.16 ERA and 6.10 FIP that Eflin posted in 11 starts at the major league level in 2017.

Eflin's first two starts were encouraging to the Phillies because while he wasn't going to keep up a 0.71 ERA, it felt as though he could have a breakout season. Eflin had arthroscopic surgery on both knees prior to the 2017 season. While his knees probably felt better in 2017 than in 2016, they likely weren't at 100 percent. In 2018, his knees likely feel as good as they ever have. With a stronger base under him, Eflin's average fastball velocity has increased to 94.8, up over a mile-per-hour from 2017. His sinker, change-up, slider and curveball have all seen similar upticks in velocity.

But since his scorching-hot start to the 2018 season, he's posted an 8.10 ERA in three starts. A year ago, the Phillies probably would have been more patient with Eflin, simply because they didn't have enough options. But the top three starters in the team's rotation - Aaron Nola, Jake Arrieta and Nick Pivetta - are essentially locked into a rotation spot. The guess here is that the only way Vince Velasquez - the team's No. 4 starter - leaves the rotation is in a late-season effort to limit his innings. So even with Jerad Eickhoff out for the foreseeable future, a slew of talented young arms are competing for the final spot in the Phillies rotation.

Phillies Nuggets: What Phillies Have The Best Chance Of Being All-Stars?

Just prior to Eflin struggling in Los Angeles last Wednesday, Cole Irvin allowed just four hits across 8.2 scoreless innings for the IronPigs. The 24-year-old, who was a fifth-round pick in 2016, is 6-1 with a 2.73 ERA in 2018. He's probably earned a chance to make his major league debut.

Enyel De Los Santos - acquired by general manager Matt Klentak from the San Deigo Padres in return for Freddy Galvis - is 5-3 with a 1.70 ERA in 10 starts at Triple-A. MLB Pipeline ranked him as the Phillies No. 12 prospect, 11 spots ahead of Irvin, at the beginning of the season. The possibility still does exist that he'll be more effective out of the bullpen, as mentioned in the MLB Pipeline scouting report, but as long as he's got a 1.70 ERA, he's going to start. It wouldn't hurt for the Phillies to get a look at the 22-year-old this summer.

Of course, Eflin will have a chance to make at least one more start at the major league level. If he looks anything like how he did in his first two starts this season, the Phillies probably aren't going to option him, regardless of how well Irvin or De Los Santos is pitching. If Eflin struggles, he does have two remaining options, one of which the Phillies may utilize.