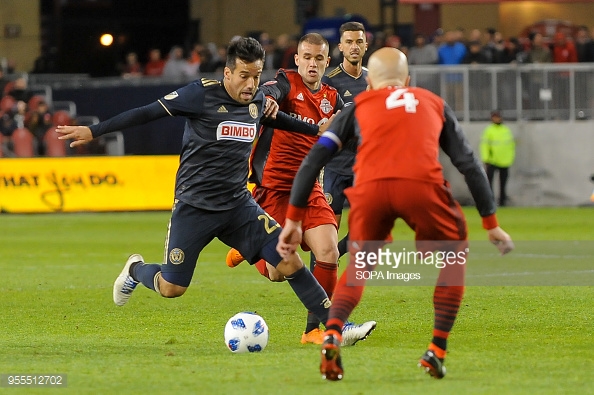 For a team without two of their central figures both an and off the field, the Philadelphia Union certainly put up a fight worthy of competing with an out-of-form Toronto F.C. squad. However, the noted absences of Alejandro Bedoya and Haris Medunjanin, added with key missed chances from their focal attacking weapons, equaled doom for the Union in front of their fans in Chester, PA. Quick hits from tonight's Union vs. Toronto match:

Without two of their better passer in the heart of the midfield, the Union were forced to primarily attack down the wings given the compactness of the Toronto midfield. Time after time, players such as Borek Dockal, Marcus Epps and Ilsinho saw pass after pass promptly jumped on by the ever-anticipating visitors. There was a major lack of confident possession from the heart of the Philadelphia midfield and it truly cornered them into going forward with a one-dimensional attack. Normally, allowing the Union to build down the wings would prove to be fruitful for the speedy wingers, David Accam and Fafa Picault. But not on this night…

Tonight was a painful affair for the Union attack and certainly one that should frustrate a large portion of the organization and fan base. While Marcus Epps was able to draw in defenders and create his space for crosses, striker C.J. Sapong was unable to effectively work into lethal positions to score once in the 18-yard box. If not disappointing enough, both Picault and Accam had chances saved at point blank range, including one curling effort by Picault that slammed against the post late in the match. If the Union are going to address anything from tonight's match, it's the abysmal play from the front three when attempting to finish off well built up plays starting from the back.

To say there were no positives to be drawn from tonight's match is not entirely accurate. We're once again seeing how effective Auston Trusty and Mark McKenzie can be as the paired centerbacks in this Philadelphia defense. Granted McKenzie's slip-up allowed Jonathan Osorio to break through and deliver the first strike from Toronto, the young defenders were bound to be tested against the quick-striking attack of Sebastian Giovinco's squad. But the Union homegrowns proved to be a problem for the Italian menace in the final thrid and limited him to a scarce amount of opportunities in front of Andre Blake's net. Tonight was a lesson to be learned for the youth in this Philadelphia side, but the ultimate lack of offensive firepower will go down as the damning aspect of this loss to Toronto.

Philadelphia will look to rebound after a long break on June 23rd when they host the Vancouver Whitecaps. 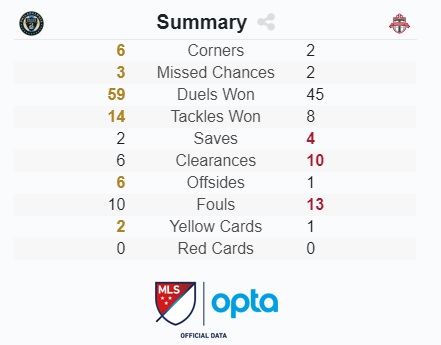