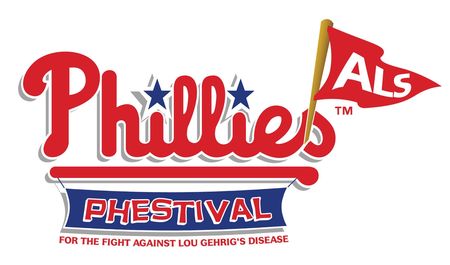 Thursday afternoon at Citizens Bank Park, Philadelphia Phillies family and fans will team up for the 34th year to help fight and defeat Lou Gehrig's disease — ALS, a devastating, fatal, progressive neuromuscular disease with no known cause or cure.

Each year, the Phillies Phestival attracts thousands of fans and is a fun-filled autograph and auction party for all ages. Many Phillies employees volunteer their time to ensure the event’s success.

The Phillies have raised nearly $17.7 million, including $656,500 at last year's rain-or-shine event, since adopting ALS as their primary charity in 1984. Raised funds are used to provide much-needed patient care and services for the The ALS Association Greater Philadelphia Chapter, as it celebrates its 41st year in 2018.

A $30 per person package includes an admission ticket and ALS program book, along with two pre-selected autograph booth tickets. Exact Phillies players and/or coaches at each autograph booth are not revealed until the two-hour event gets underway at 4 p.m.

New to the 2018 Phestival is the 1993 Phillies Autograph Booth, honoring the 25th anniversary of the 1993 National League Championship season. The booth is available for an additional $30 purchase, and is tentatively scheduled to include Mickey Morandini, Kevin Stocker, John Kruk, Larry Andersen, Tommy Greene and Larry Bowa.

Admission-only tickets for adults ($15) and children ($5) are also available, along with $20 grab bags and $5 "Every Roll's a Winner" chances to win signed memorabilia, past giveaways, game tickets and more.

For more information and to purchase tickets, visit www.phillies.com/philliesphestival, or call the ticket office at (215) 463-1000.