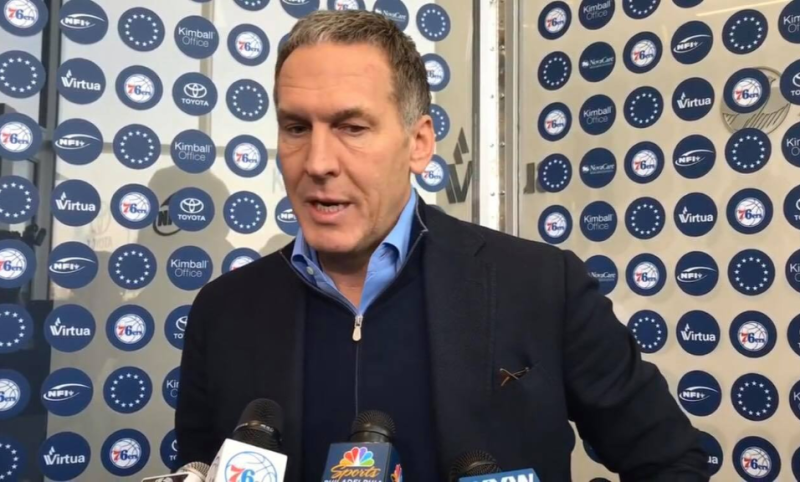 On Tuesday, Ben Detrick of The Ringer released a column centered around five secret Twitter accounts and how they could potentially be linked to Philadelphia 76ers President of Basketball Operations, Bryan Colangelo. Detrick reached out to the Sixers and found out one of the accounts belonged to Colangelo, but on the same day of finding that out, three of the other accounts went from public to private. All of the accounts showed a trend of following current/former Sixers and Raptors players, Sixers staff and media. A number of the tweets are pretty damning too, from insulting Joel Embiid's work ethic to calling Nerlens Noel a vulture to supporting numerous moves made/not made by the Colangelo regime, whether it was trading up for Fultz or the "botched" Jahlil Okafor deal from a season ago.

The Sixers brought in a New York based law firm to investigate the matter and their decision could come as soon as Friday. Zach Lowe of ESPN reports that the internal probe has become more and more focused on Colangelo's wife, and that Sixers ownership is thinking about cutting ties with the former two-time NBA Executive of the Year.

The probe hasn't been completed, and a final decision has yet to be rendered, but the fallout from a report by The Ringer that connected Twitter accounts unleashing privileged information and provocative attacks surrounding the Sixers has left ownership flushed with embarrassment and anger -- and Colangelo fighting for his professional life, league sources said.

The issue here is that there has been no indication that the investigation can prove Colangelo's guilt or 100 percent innocence and if they cannot find enough to prove his innocence, then he is as good as gone. Lowe goes on to mention in his column that league sources say that while some members of Colangelo's staff are preparing for his removal, some are hoping that he survives this unusual situation. That being said, at this point it seems like the damage is already done and with the most important offseason for the organization kicking off, they cannot risk losing to opportunity to land top-tier free agents.

Ownership fears that Colangelo's credibility inside and outside the organization may be too badly damaged to continue his job, especially within a month of a July free-agency period when the Sixers plan to pursue superstars such as LeBron James and Paul George to partner with young stars Joel Embiid and Ben Simmons.

As part of the investigation launched by the Sixers and the outside firm, Lowe says that Colangelo has surrendered his cell phones and he's told close associates that he may know who is behind the accounts, but was unaware of them prior to The Ringer's story breaking.

The Sixers commissioned an outside law firm to investigate the matter, and that investigation has already included the surrendering of Colangelo's cell phones, league sources said.

Colangelo has told close associates that he believes he knows who is responsible for the tweets but has insisted to those inside and outside the investigation that he had nothing to do with the postings and was unaware of them until The Ringer brought them to the Sixers' attention prior to publication of the story this week, league sources said.

As this saga moves closer and closer to a conclusion, it's hard not to wonder what effects this could have on the organization as a whole if Colangelo is indeed dismissed. With the draft just three weeks out and free agency a month away, the organization will have to conduct a deep, thorough search to find someone to continue their program as it heads into the most important offseason yet.